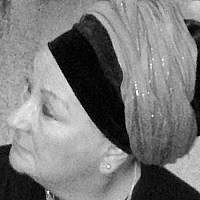 The Blogs
Jacqueline Burnley
The Last Levite Chines Brush Artist Baalat Teshuva
Apply for a Blog
Please note that the posts on The Blogs are contributed by third parties. The opinions, facts and any media content in them are presented solely by the authors, and neither The Times of Israel nor its partners assume any responsibility for them. Please contact us in case of abuse. In case of abuse,
Report this post.

When I was young, in my twenties I took a ferry from Dover on the south coast of England to Calais, a busy fishing port and small town in the north of France.

There were a few destinations for day-trippers, who wanted to go abroad and back in a day. It was such a fun idea, and a great liberating, and exciting thing to do. I did the voyage many times with different friends. We had in mind to have a coffee or French pastry and sit in a boulangerie, where the French start sipping red wine at 6 a.m., and life seemed so different and charming there. We would look around if there was a gallery or look at the duty-free shops and walk around the town.

The ferry itself was a treat. You could sit up on deck for three or four hours and enjoy the sea breezes. Some people were busy changing their money from pounds to francs. Some were shopping onboard in the duty-free shops. Everyone was out for a thoroughly pleasant time.

A complete day out in a foreign country and back by nightfall.

The particular time I am thinking about now had such a strange end to the day. Something like this had never happened to me before. I did this trip maybe ten times at least.

As we boarded the return ferry back to England, people were under the decks in various cafeterias ordered something to eat or drink after their interesting day out in France.

The tables had ledges all around in case the sea was rolling.

After a short while, terrible wind and rain began to set in and a huge storm started.

All the meals, plates teacups, and drinking glasses were sliding backward and forwards on these small square tables built for ferry journeys.

Then the chairs started to move across the dining-room, followed by the people in a very distraught situation. I think the tables might have been fixed to the floor.

I felt queasy so I thought I would leave that rocking scene to go upstairs onto other decks to see if it felt different on a higher level.

On the higher decks, it was worse.

People were leaning over the railings and being sea-sick.

I walked around the boat, and that was the same scene everywhere.

The lavatories were all occupied, and many passengers with white- ashen faces were lying around on the floor

Then it became even worse. The boat was being smashed around by the gigantic rough waves. Anyone on deck was by now, soaked and completely wet. All the shopping and bags, from the day’s adventures and purchases, were strewed about all over the boat. No one was interested in anything except saving themselves from more sickness.

I saw many sailors and staff also sick and incapable of doing their duties. That was when I knew it was a serious storm because even the most experienced sea-going people could not take that storm.

I decided I was returning downstairs to sit it out. I made a decision then and there that I was not going to be sick.

I found a seat. The view all around me was horrific. Not in a war sense, but we were in an emergency, I think, but just to not go down like everyone else on the boat was my plan. I sat there and completely detached myself in a strange way. I thought this is, after all, a ride we all signed up and paid for it. No one forced us we didn’t have to go. In fact, we were all looking forward to the most carefree day. I thought to myself, it will be over in a few hours, and I am going to survive the situation. It took great composure. I sat and stared ahead of me in a sort of meditation, and I left the situation that was physically surrounding me and transcended it.

There were terrible smells and an atmosphere of panic and sickness. Each time a door would slide open salty sea and wind and water would rush into the lounge. I thought this is a temporary situation, we were going to get home, back to harbor in a few hours.

There was no way to help anyone individually because every single passenger and probably most if not all of the crew were completed incapacitated, strewn on the floor mostly lying on the decks.

It was just me and whoever was driving that boat, the captain, whoever that was, who were left in this world.

Once we docked and the passengers got themselves washed up a bit and collected their possessions. Many people came up to me afterwards and said, all we could do was to look at you. There was nothing else to do but focus on you. You kept us strong and feeling brave and we couldn’t put our eyes anywhere else it was all too disturbing on many levels.

I don’t know why I was the only person not to succumb to that dreadful sea-tossed day trip. I don’t know what the other passengers had been eating or drinking…but what I do know, is I can dip into that well of experience some times and tap into the gift of transcendence on many levels, especially right now in my senior years when the boat is rocking all over the world, and the passengers are feeling sick and lost and scared. I remember that day trip and I hold onto the idea that there is a core inner strength we must attach ourselves to. We, who say we are religious, know it is G-d, the Master of the Universe, who is running the ship. We can rock and roll about, feel confused, troubled, complain, get angry, be sick, feel awful, go under, go down, despair, forget why we even took the trip. Or we can hold on to ourselves and say “There is a Captain on board who knows how to get us home!”

We can call out, we can pray, we can ask for help, we can imagine a way out, we can close our eyes, and we can say I,” signed up for this trip, in fact, it was going to be a great adventure and a wonderful experience. “

With hindsight and wisdom, we know life cannot be all about a day trip and materialism and a duty-free ride. We know this is the journey of a lifetime literally, and we must be the best person we can be in the given situation, rise above the restrictions, find new sides to ourselves that we did not even want to know, and weather the storm together if possible or apart if that is the situation, but I still want to be the person who people focus on and say, She can do It! So, therefore, it’s possible! Then I can do it too!

We can survive the situation with G-ds loving kindness. However, we must do more than just survive. We must stretch ourselves and do more than we have had to do in the past. When all the grips, handles, and supports, banisters, and stairs have been taken away, we are stripped down to the essential soul, who we are, lets make that into an adventure worth working through, then we can say we made it and helped others through it too.

About the Author
I was born in London, England. My father was a Holocaust survivor, he fought for the British forces and was a strictly disciplined soldier of the highest intelligence using his many languages to his advantage in the War. He met and married my mother during the war in a whirlwind ten days of romance. Which we laughed and cried out for the next 50 years. I was brought up with my sisters in the post-war years. I studied Art and English and qualified as a teacher and used my skills to work all my life. My husband loved Isreal and came as a lone soldier in the 1970s We married and had two children. I became a Baal Teshuva and have been a long interesting transformative journey. I made aliyah by myself, in 2007 and against all odds cut ties with my country of birth, left my career and job friends and family, to be near my family here, and to be blessed to be together with my grandchildren growing up In Israel.
Related Topics
Related Posts
Comments