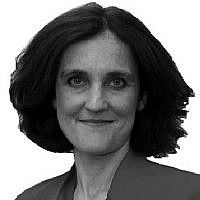 The Blogs
Theresa Villiers
Apply for a Blog
Please note that the posts on The Blogs are contributed by third parties. The opinions, facts and any media content in them are presented solely by the authors, and neither The Times of Israel nor its partners assume any responsibility for them. Please contact us in case of abuse. In case of abuse,
Report this post.

In my third visit to Israel, I was once again impressed with the vibrancy and energy of the country, with its vigorous democracy, civic society and media.

I was also struck by the relative stability of the places I visited, including the West Bank, compared to the violent convulsions happening elsewhere in the Middle East region.

Iran was a subject raised by many of the people who took the time to meet the delegation of MPs of which I was a part.

Commentators such as Jonathan Spyer and David Horovitz provided us with a grim assessment of Iran’s involvement in the region through Hezbollah in Lebanon and its various proxies in Syria.

We heard similar concerns from the political leaders such as Yair Lapid and Gilad Erdan.

Almost everyone we met had a rather bleak view on the prospects for restarting negotiations, after so many initiatives have ended in failure; but I was left in no doubt about the continuing determination in Israel to strive for a settlement to deliver lasting peace and security.

A number of the projects we visited gave grounds for optimism in the long term.

For example, we saw Israeli charities Beit Issie Shapiro and Save a Child’s Heart working across community divisions to help vulnerable children on both sides.

A visit to Rawabi to see the first planned Palestinian city being constructed was also heartening.

Inevitably, the subject of Donald Trump cropped up, with most people unsure of what approach the new President would ultimately take on key issues relating to Israel.

Palestinian Minister, Dr Mohammad Shtayyeh, speculated on the alarming possibility that Presidents Trump and Putin might seek to carve up spheres of influence in the Middle East in what he called a ‘new Yalta’ (referring back to the de facto division of Europe at the Yalta conference after World War II).

The visit enabled all of us in the group to get a better understanding of the complexities of the issues around settlements, and we heard a range of sharply differing views.

I welcomed the opportunity to meet the UK ambassador to Israel, H.E. David Quarrey, and pass on some of the concerns expressed by my constituents on the decision by the UK Government to vote for UNSCR 2334.

In conclusion, I believe that visiting Israel and the West Bank can provide Parliamentarians with crucial insight into the long-running dispute over this land, and I am grateful to Conservative Friends of Israel for inviting me to take part in this visit.

Seeing Israel at first hand brings home just how small the country is and how severe the security risks are with which it has to grapple on a daily basis.

For example, in Sderot we heard about the impact on local residents of thousands of rockets fired from Gaza over recent years. We also met people from the farming cooperative of Netiv Ha’asara situated right next to the boundary with Gaza who have also had Hamas rockets fired at their community but are still working to build friendships with their Palestinian neighbours.