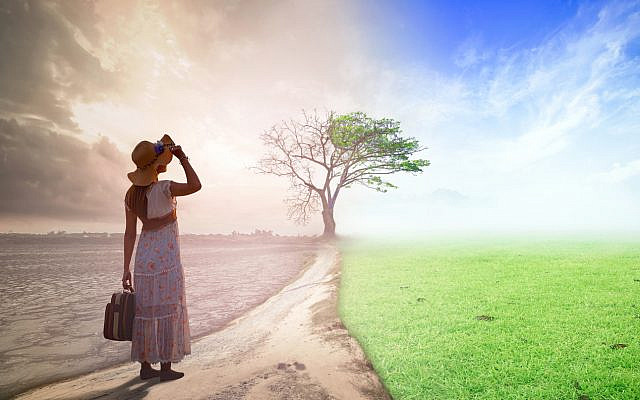 We are again in a period of transition: this time from the month of Menahem Av to Elul. And sure enough, in my inbox today, there was an advertisement from sefaria.org inviting me to download an app for Selichot and the month of Elul.

I don’t do well with transitions. My first blog (this one is my 10th) was about the transition from Ruth to Lamentations. This one will be about why I am uncomfortable with transitions. I must also note that the biggest transition in my life was 55 years ago, when my husband and I came to Israel for two years at the end of August and for some reason never left. Ironically, on the anniversary of our coming here, I am going to the US, for a family visit, after vowing BCE and DCE (before and during the era of corona) that I would not ever be getting on a plane again.

The problem with transitions is that you have to adapt to them. You have to pretend how wonderful everything new is, while secretly bemoaning (or denying) everything good you left behind. In our case, in those days, it was peanut butter, tuna fish, pizza, air conditioning, friends, family, not necessarily in that order. Now that I am preparing to leave for 10 days, transitioning is not so simple. Two of my children who are now rabbis are busily rescheduling, arranging coverage while I am gone, or as my husband (also a rabbi, but retired), calls it “babysitting.” I have to explain where everything is and how things are done, while also thinking about what I have to take to the US in these uncertain times.

Masks for the plane are at the top of the list. Three years ago, I told my niece (whose son is being bar mitzvahed) that I would only come for this occasion if I no longer had to wear a mask on the plane. And I no longer HAVE to wear a mask, but have no desire to be among those statistics of people returning from flights and coming down with COVID. The masking is self-imposed. Just like the mitzvot, which we take upon ourselves to observe. Which brings me back to Elul.

Selichot and the month of Elul

The religious person takes upon herself to observe selichot, which literally means apologies. Apologies to whom? To oneself? To society? To friends? To God? For living? I’ve heard people say “Excuse me for living!” when they are insulted. It’s also the title of a romantic comedy and was the actor Steve Martin’s catchphrase made famous when he starred on Saturday Night Live in the ’70s. When you apologize, you are asking for forgiveness, or pardon. We say “excuse me” upon pushing to the head of the line, whereas the French will say “pardon.” A pardon is your get-out-of-jail card, if you are lucky, or are owed a favor from a corrupt president.

Those who pray hope that God will pardon (forgive) their sins. One can ask “what sins?” We have all done bad things, starting with swatting flies and killing cockroaches all the way up to white lies to avoid unpleasantness. On Yom Kippur, there is a whole litany of sins to which we confess over and over, whether we have committed them or not, in a collective prayer for the sins we have knowingly or unknowingly committed before God. We ask the deity to have compassion for us and forgive us for all of our sins. יהִי רָצוֹן מִלְּפָנֶיךָ ה’ אֱלֹהֵינוּ וֵאלֹהֵי אֲבוֹתֵינוּ ואמותינו, שֶׁתְּרַחֵם עָלֵינוּ, וְתִמְחָל־לָנוּ אֶת־כָּל־חַטֹּאתֵינוּ, וּתְכַפֶּר־לָנוּ אֶת־כָּל־עֲוֹנוֹתֵינוּ, וְתִמְחֹל וְתִסְלַח לְכָל־פְּשָׁעֵינוּ:

But when I look at the list, I think to myself, are these really sins? When I overindulge in food, or disrespect my parents, is that a sin? Or are they just signs of being human. Like the “horse and carriage, you can’t have one without the other,” guilt and being Jewish is ingrained in us. We  go around and say excuse me so often that it no longer means anything. Certainly, we should be introspective, but perhaps there is too much of it during this season of transition. We should be out there enjoying ourselves and not beating our breasts over imaginary transgressions.

Devarim, the Book of Things

During this transitional time between Menachem Av and Elul we are reading the book of Deuteronomy, in Hebrew devarim דברים. The Hebrew root דבר  (davar or dabar) has many meanings, depending on context. In biblical Hebrew devarim can mean things, words, events, actions. It is also how the Ten Commandments are referred to עשרת הדברים (Deut. 4:13): the 10 things or words we should obey, although from talmudic times we commonly refer to them as aseret ha-dibrot עשרת הדברות.

I find it interesting that speech is one major association with the root davar. Speech is what makes us human; it can help us to communicate, to make ourselves understood. But it also has the distinction of making ourselves misunderstood. The wrong word, or its misuse, is the stuff of both comedy and tragedy. We have to be careful what we say or write lest our good intentions are misunderstood and alienate, rather than comfort. No wonder Rabbi Judah HaNasi said: “Best of all is silence,” and quoted from R. Shimon, the son who said “All my days I grew up among the Sages, and I have found nothing better for a person than silence” (Mishneh Avot 1:17).

All of this is very admirable, but very often the advice to not waste words, to be silent is used to stop people from sharing and speaking up. And very often these people are women, or the under-privileged. As someone who likes to talk, not only to hear my voice, but to share, I am very conscious of what comes out of my mouth and, when speaking verbally, will often censor myself. This is part of being an adult. I remember when my first grandchild was born, my friends told me “Listen. Never criticize. Wait until asked!” That for me was the hardest advice to take. But I took it and my children are still speaking to me and I still wait (sometimes) for them to ask.

On the one hand, speech has its limitations, but it  allows us communication, something which I am not willing to give up, even at the risk of misinterpretation. The ability to communicate, to teach, to share are some of my favorite things, and compensate for the unfavorite aspects of aging. Thus in sharing with you some of my peeves, my unfavorite things, it offers me some grace as in the words of the song, “When I’m feeling sad I simply remember my favorite things And then I don’t feel so bad.”