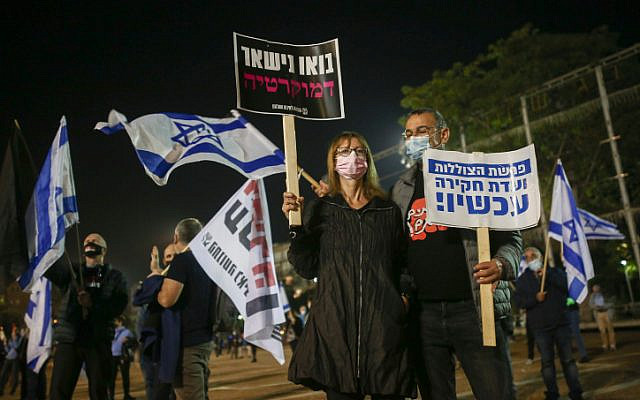 They can’t send us to elections — again! — if we refuse to go. And that is what we must do. Why?

It’s very simple. We elect representatives to act in our best interests, and in the best interests of the country. Is there a single citizen in Israel whose interests are best served by going to yet another round of elections? Does anyone think that another several months spending our money on political campaigns, another several months without a budget or a functioning government, is what this country needs as it continues to grossly mismanage a health and economic crisis of unprecedented proportions? Not only will this election be criminally wasteful at a time when a million people are unemployed and many more are struggling financially, it will also, in all likelihood, yield very similar results to the last three rounds, and return us again to the very same deadlock, poorer, and more battered.

Well, some will say, anything is better than the deadlock of the current government. This understanding of the options before us is kind of like a hostage being offered a choice: either have your hand cut off, or your arm. Yes, if those are the only two choices, then the right choice is obvious. You might even be grateful for the opportunity to have your hand cut off, when you consider the alternative.

This is precisely what we have become — hostages to a situation centered around the political survival of one man. There is no substantive reason that is offered for the failure to pass the budget. If, in August, the excuse was that the uncertainty of the coronavirus pandemic made it impossible to create a long term budget, even after we were several months into it, in December, that excuse loses any veneer of plausibility.

The most plausible reason that the budget has not passed, as promised in the coalition agreements, has nothing to do with ideology, nor any rationale of any sort, and everything to do with the particular legal predicament of the prime minister, who presents us with the following two options: either delay the budget, again, so that I can remain prime minister and later force elections without handing over my post to Benny Gantz, or go to elections, so that I remain prime minister in the interim, still with no budget. Either your hand or your arm. What do you choose?

But in truth there is a third option, and we must assert it. We could refuse to be taken as hostages.

Hundreds of thousands of people have taken to the streets in the past months calling on Prime Minister Netanyahu to step down. At this critical time, it is the duty of every citizen to prevent another round of elections by raising their voice and joining this call. This isn’t about politics; the government’s orientation would not change significantly. And it isn’t even about taking a position against corruption. It’s about refusing to continue to be held hostage, and it’s up to us.

About the Author
Avidan Freedman is an educator at the Hartman Boys High School in Jerusalem, and an activist against Israeli weapons sales to human rights violators. He lives in Efrat with his wife Devorah and their 5 children.
Related Topics
Related Posts
Comments