Those Lithuanians who murdered Jews are not despised for their actions, they are, instead, revered for imaginary acts of heroism and courage. Lithuania has an entire government department dedicated to Holocaust fraud. Almost every credible Holocaust research organization recognizes Lithuania as a Holocaust revisionist state.

Lithuanian defense minister Arvydas Anušauskas is a known Holocaust revisionist, distorter and antisemite. On November 23 he announced: “Today, I can share the news that the remains have been found at an NKVD-linked location in Liepalingis, and based on preliminary evidence, these might be the remains of colonel Juozas Vitkus-Kazimieraitis, the founder of the resistance struggle, a partisan leader, a freedom fighter and a holder of the Cross of Vytis.”

On the same television program, “experts” from Lithuania’s so-called Genocide Center stated there was a lack of DNA evidence to confirm the remains were really those of Vitkus-Kazimieraitis. Then, they quickly confirmed they are. 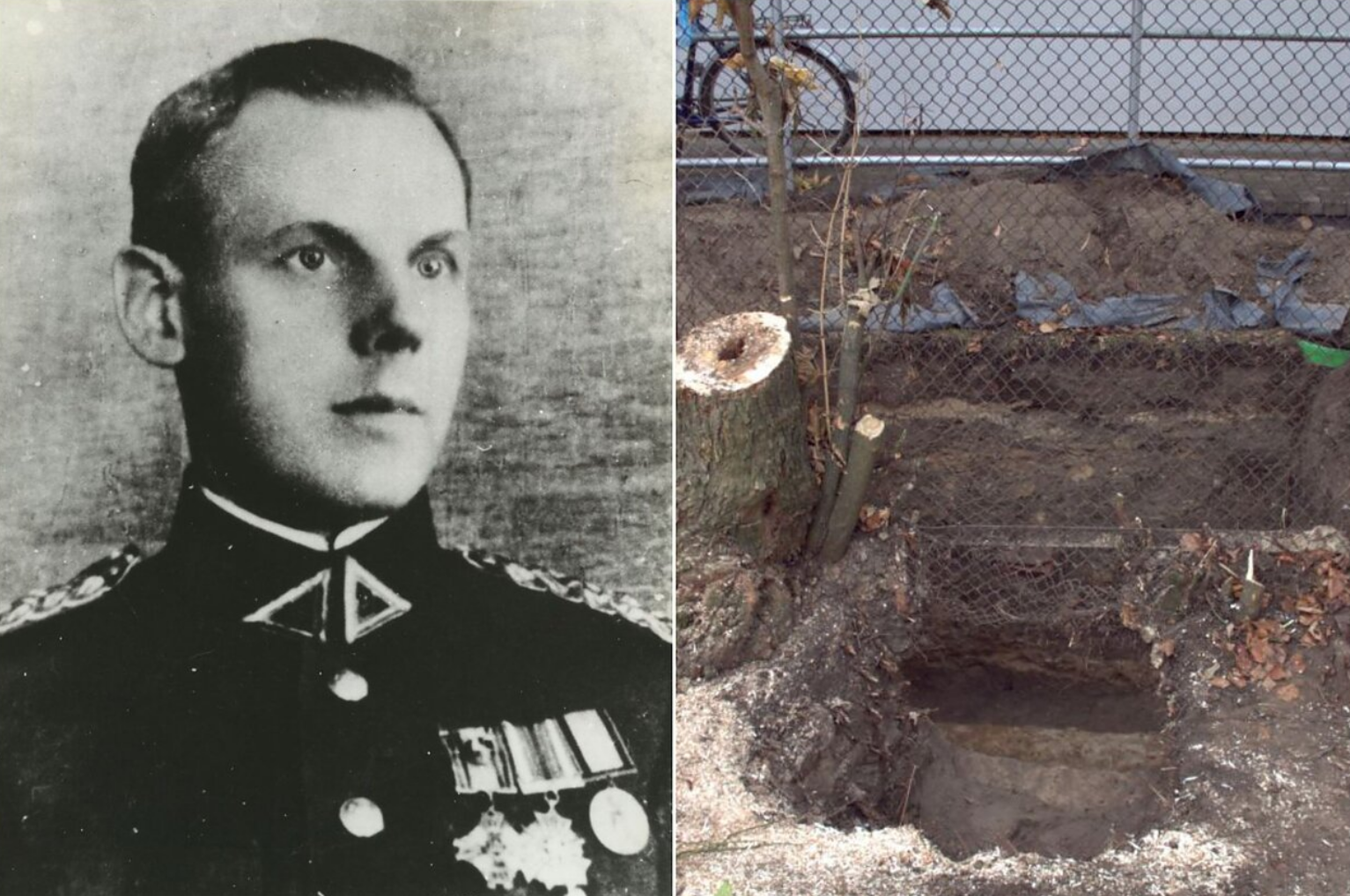 Juozas Vitkus-Kazimieraitis and the site of his grave.
His Jewish victims do not have graves. They lie twisted in death pits.
Photo Source: https://www.lrt.lt/en/news-in-english/19/1831801/forensic-experts-identity-remains-of-anti-soviet-partisan-leader-vitkus-kazimieraitis#lg=1831801&slide=1394271

Vitkus-Kazimieraitis’s relatives said they are proud of their forebear.

The Genocide Center has written an extensive heroic biography of Vitkus-Kazimieraitis but, as usual, they and Anusauskas somehow neglected one “minor” detail – researchers and writers often place Juozas Vitkus-Kazimieraitis as a guard at the Majdanek concentration camp in Lublin, Poland. Missing such “trivial details” are common for Lithuania’s Holocaust revisionists who do not really consider the murder of Jews as relevant or significant. He is on the list here: “Nazis in the Lublin District and at the Majdanek Camp“.

Germany would place a death camp guard on trial. Lithuania deems him a national hero.

In their frenzied attempts to serve their Nazi puppet masters, Lithuanians proved that they could be more cruel, more barbaric and more inhumane than the Nazis themselves. In fact, Nazis complained about the savage barbarity of those who, today, Lithuania considers their heroes. Lithuania achieved the notable distinction of having the highest murder rate of Jews in Europe. This is the most pervasive and successful program in Lithuania’s entire national history.

Anusauskas and the Lithuanian Defense Ministry have a unit called the Strategic Communications Department, whose job it is to defend dubious legends, lies and cherished fictions of Lithuanian history, and make them palatable. Those who undermine these fabrications are recorded among the ranks of propagandists working for enemy countries. (Personally, I have pending criminal charges against me in Lithuania for identifying and publicizing some of their national heroes as Holocaust perpetrators).

The overlap between those who Lithuania deem their national heroes, and those who perpetrated Holocaust crimes, is remarkably consistent. So consistent that it brings every “hero” of Lithuania into disrepute. So consistent that it must be assumed that Lithuanian wartime “heroes” were in all probability Holocaust perpetrators themselves, unless proven otherwise by non-governmental, non-ideological, genuine historians.

The government of Lithuania has readied excuses in case anyone questions the veracity of the perpetrators. They commonly claim there could have been two people with the same name; one invisible, and the other misidentified. This position is so absurd that any intelligent person walks away, scratching their head in confusion. These are Lithuania’s tried and true methods for creating antisemitic myths, with imagination, errors and lies all tied up into one insoluble Gordian knot.

Lithuania is free to choose whichever murderers of Jews (and they have many thousands to choose from) as their national heroes within Lithuania. However, they cannot present themselves to Jews, and claim they are honest or sincere about reconciliation or ties.

The town of Leipalingis where Vitkus-Kazimieraitis’s rotten corpse was excavated, is also notable for its antisemitism. They conducted a huge pogrom on June 19, 1939. The mob sought to lynch Peretz and Shilom Kravetz and smashed out the windows of Jewish homes and businesses around the market square. In the aftermath of the pogrom, Lithuanian authorities issued violations of administrative law to 39 people, including to the Kravetzes! Lithuania’s State Security Department recorded rumors circulating which claimed the German Nazis had promised to buy Lithuania an airplane if at least one Jew was murdered in Leipalingis. Murders were, fortunately, avoided in 1939. But  it was a mere postponement. Jews there didn’t survive. The entire Jewish community of Leipalingis was murdered on September 10, 1941.

The Lithuanian Ministry of National Defense, under Anusauskas, is part of the Holocaust deception industry in Lithuania. NATO allies should be aware of those with whom they are entangling themselves.