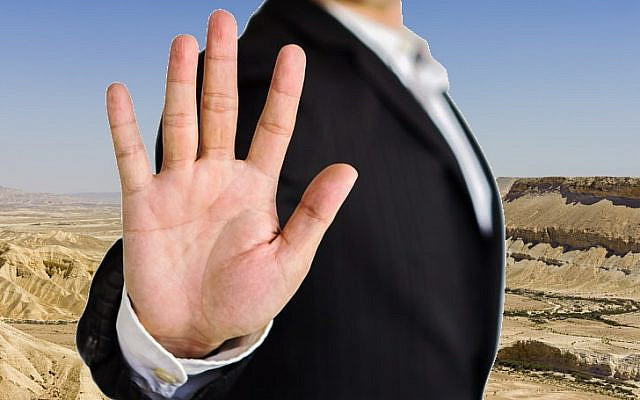 When the Jews appealed to the Edomites for permission to travel through their territory en route the Holy Land, the Edomites flatly refused and even threatened military action. The word used in the Bible to denote the Edomites’ “refusal” is vayima’en (Num. 20:21). That same word is used when Jacob “refuses” to be consoled over Joseph’s apparent death (Gen. 37:35), when Joseph “refused” to philander with Potiphar’s wife (Gen. 39:8), when Jacob “refused” to place his right hand on Joseph’s firstborn (Gen. 48:19), when Amon deviously feigned sickness by “refusing” to eat (II Shmuel 13:9), and in several other places in the Bible. Nonetheless, the more familiar Hebrew term for “refusal” is not mi’un — a cognate of vayima’en — but rather siruv. In this essay we will discuss these two synonyms and attempt to find the differences between them.

While cognates of the Hebrew word mi’un appear forty-six times throughout the Bible, its seemingly synonymous counterpart siruv only occurs once in the entire Bible, making it a hapax legomenon — and even that example is not universally agreed upon. When G-d tells the Prophet Yechezkel not to fear any repercussions from the Jewish People as the result of his prophecies, He refers to the nation as saravim and salonim (Yechezkel 2:6). The commentators agree that salonim are a type of “thorns,” but when it comes to the word saravim, there are two different approaches.

Menachem Ibn Saruk (920-970), Rashi (1040-1105), Radak (1160-1234), and others explain that saravim means that the Jews were “rebels” and “refusers.” Menachem even defines meridah (“rebellion”) as sarvanut, just like he defines saravanim as mardut (“rebellion”). According to them, this is the only instance of the root SAMECH-REISH-BET in the Bible in the sense of “refusing.” Nonetheless, Menachem’s famous interlocutor Donash Ibn Labrat (920-990) disagrees with this assessment, instead proffering that when Yechezkel calls the Jews saravim, this term refers to a type of “thorn,” just like salonim does.

“There is an author out there whose combined erudition in Torah research as well as secular research is quite formidable. This is readily apparent in the revised edition of Lashon HaKodesh: History, Holiness and Hebrew… The book is true to our Mesorah, yet it finds a way to include the archaeological evidence behind various theories too. – I have no doubt that anyone who reads this remarkable work will be be thoroughly taken with it. This author looks forward to further works by Rabbi Klein.” -Rabbi Yair Hoffman

Interestingly, in that chapter of the Book of Yechezkel, G-d uses cognates of meri/meridah (“rebellion”) when discussing the Jewish People six times, and in each of those times the Targum renders the word in Aramaic with a cognate of siruv. What’s even more interesting is that when Yechezkel uses a cognate of pesha to mean “rebellion” in that chapter (Yechezkel 2:3), Targum renders that term in Aramaic with an Aramaicized cognate of the Hebrew meridah.

That said, all commentators agree that sarvan in later Rabbinic Hebrew refers to a “refusenik.” For example, the Mishna (Brachot 5:3) rules that if the chazan made a mistake during the prayers, then he should immediately be replaced with another chazan, warning that the second chazan should not be a sarvan under such circumstances. Maimonides and Bartenura explain that under normal circumstances a person asked to function as the chazzan should show some humility, and initially “refuse” the honor (sarvan), but in this case, where the second chazan is appointed to replace the first chazan, it is inappropriate for him to “refuse” (sarvan) the honor.

Similarly, a person who pesters another and unrelentingly tries to convince him of something is called misarev (Nedarim 8:7), because he “refuses” to give up on changing the other person’s mind (see Tosafot Yom Tov). Sometimes, an extra HEY is added before the final letter of this word to yield mis’harev for “pestering” (see Rashi to Bava Kama 28a, 32b, Chullin 94a).

Rabbi Shlomo Pappenehim of Breslau (1740-1814) writes that the word mi’un is related to the word ein/ayin (“no,” “is not,” “has not”), because a person who “refuses” does not engage with that which he has rejected, but instead stubbornly tries to ignore it.

Rabbi Eliyahu HaBachur (1469-1549) points out in his works Sefer HaTishbi and Meturgaman that most instances of the Hebrew words meridah (“rebellion”), meri (“rebellion”), and mi’un (“refusal”) in the Torah are rendered by the Targumim as siruv. In light of this, it seems that the two Hebrew words for “refusal” — mi’un and siruv — are indeed synonyms, but that they are sourced in different languages. Mi’un and its cognates that appear multiple times in the Bible seem to be genuine Hebrew, while siruv, which at most only appears once in the Bible, seems to be a borrowed Aramaic loanword, and thus became more popular in post-Biblical Hebrew when Aramaic had a stronger influence on the language.

However, there is another approach to this question.

An early commentary to Targum Oneklos ascribed to Rabbi Yaakov Dienna (published under the various names Patshegen, Tzintzenet HaMann, and Sefer HaYair) asks the following question: Given that Targum Onkelos typically renders mi’un as siruv, then why in Exodus 22:16 does he not do so? That verse states that if the father of a girl who was seduced “refuses” to give his daughter to the seducer for marriage, then the seducer must pay a penalty. The Hebrew text there reads im ma’en yima’en (“and if the father refuses”) — yet Onkelos translates the verse into Aramaic as though it says, “and if the father does not wish…” The meaning does not necessarily change, but the wording is unexpected.

Rabbi Dienna resolves this question by positing that mi’un and siruv are not perfect synonyms, and that their meanings do not always line up. He explains that mi’un refers specifically to a case wherein somebody was asked to do something (perhaps a favor) and “refused” to comply. On the other hand, the term siruv implies a stronger refusal than simple non-compliance. Siruv implies the utter rejection of a certain proposition. In the case of the seducee’s father, because he publicly declares in front of the court and in front of his daughter that he does not want her to marry the seducer, he can be expected to use a more toned-down verbiage. Because of this, Onkelos did not want to translate the Bible’s mi’un as siruv, which would imply a more intense language than the father would likely use in public discourse.

Similarly, when Balaam reported that he cannot accompany Balak’s men, he says: “G-d has refused (me’en) to allow me to go with you” (Num. 22:13). Targum (there) again refuses to translate mi’un as siruv, instead rendering the clause “there is no will before G-d to allow…” Rabbi Dienna accounts for this unexpected phraseology by explaining that Onkelos felt that using the more vulgar term siruv regarding G-d’s refusal is considered somewhat disrespectful towards Him. Therefore, Onkelos creatively rendered the passage a bit differently. According to this approach, the difference between mi’un and siruv lies not just in their etymological roots, but also in their meanings, as siruv somehow implies a more intense form of “refusing” than mi’un does. (On the difference between ma’en and me’en, see Midrash Sechel Tov to Exodus 7:27.)

Another fascinating point related to this discussion is that colloquially the terms mi’un and siruv refer to two totally different legal procedures. The term mi’un appears numerous times in the Mishna (for example: Moed Katan 3:3, Yevamot 13:1-6, Bava Metzia 1:8, Sanhedrin 1:3, Chullin 1:7) in reference to the legal procedure by which a girl who was wed in a marriage not recognized by the Bible, but recognized by the Rabbis (e.g., if she was orphaned from her father, and her mother or brothers married her off), can “refuse” her husband and be allowed to marry someone else. In contrast, the term siruv refers to a person who “refuses” to heed a summons when called to appear before Jewish Court or “refuses” to listen to the court’s ruling. Such a person, who is held in contempt of the court, may be subject to sanctions that resemble excommunication and/or may allow the dayanim to give permission to the opposing litigant to petition a non-Jewish court.

(By the way, according to the Oxford English Dictionary, the -nik suffix in English is borrowed from Yiddish and Russian, and is said to have especially come in vogue after the Russians successfully launched the Sputnik satellite. Hence, the English terms beatnik, no-goodnik, peacenik, andkibbutznik.)