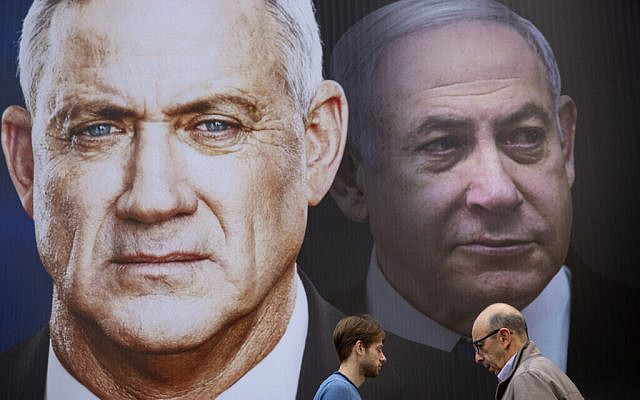 People walk past an election campaign billboard for the Blue and White party, the opposition party led by Benny Gantz, left, in Ramat Gan, February 20, 2020. Prime Minister Benjamin Netanyahu of the Likud party is pictured at right. (AP Photo/Oded Balilty)

The coronavirus, in its extreme presentations, induces multi-organ dysfunction ultimately leading to breakdown. Its lethal effects have radiated far beyond the realm of individual health, progressively infiltrating the public domain and exposing its economic, societal, and normative orders to widespread contamination. In Israel, this process is especially advanced in the political sphere. Following the big bang orchestrated by Benny Gantz last Thursday, all eyes are now riveted on the intricacies of the construction of an emergency government and their consequences in the short-term. But because of rampant conceptual confusion, insufficient attention is being given to the deeper ramifications of this upheaval.

Israel entered the coronavirus era in political turmoil. The governmental deadlock was compounded by a profound democratic crisis, governance was approaching a new nadir, and societal polarization was at an all-time high. Since the outbreak of the coronavirus pandemic, divergent attitudes to its dangers have colored attitudes towards its treatment. Those who view it as “the gravest imminent danger in centuries” (Netanyahu in the lead) have been willing to sacrifice existing norms to contain its proliferation; those who reject these dire projections are more concerned with its non-medical implications; and the undecided are withholding judgement.

All too few are aware of its cataclysmic effects on the public’s trust in its leaders, guiding norms and institutions. The issue of citizen confidence in elected representatives, in the values they uphold, in their capacity to control state structures, and in their commitment to inclusive social solidarity will have to be dealt with in the post-crisis period. The building blocks for meeting this challenge must be laid down today.

Benny Gantz’s snap decision to enter into an emergency coalition with Benjamin Netanyahu in contravention of his most sacred electoral promise — that he would not sit in the same government as a person indicted on charges of felonious public malfeasance — abruptly upended all the working assumptions of Israeli political dynamics in recent years. The fear of prolonging the governmental stalemate in present circumstances, in the view of both Gantz and Netanyahu (albeit probably for very different reasons), has trumped all other considerations. The leader of the main opposition party has legitimized his key opponent, in the process undercutting his own raison d’etre. Ironically, Netanyahu, too, has accorded undue power to a man he has consistently dismissed as incompetent and more.

Together, they have made a mockery of the basic democratic principle of the peaceful change of government at the ballot box. Their working premise continues to be that stability at the helm of government is an imperative in unusual times. What they fail to see is that continuity (or is it familiarity?) does not necessarily ensure stability.

The negotiations around the formation of the new government have centered almost exclusively on its composition. As decisions are being made about the allocation of portfolios and the identity of potential ministers, little is being said about the substantive guidelines of the incoming coalition or its priorities (although the need to deal with the medical and economic emergencies will obviously be paramount). Needless to say, this strategic ambiguity sows even greater uncertainty and trepidation.

The upshot is nothing short of bewilderment mixed with large doses of anger, fear and skepticism. In opposition circles the reigning sentiment is one of disappointment bordering on a deep sense of betrayal. In the right-religious bloc, solid support for the leader has somewhat tempered (but hardly completely mitigated) heuristic concerns. Large segments of the public are adopting a wait-and-see attitude. Most Israelis who have not opted out are hard put to pinpoint whom they believe and why,

Mistrust in government inevitably trickles down to the regime level. Several key elements of democratic regimes, already under threat, have been further compromised by the shenanigans of the last few days. First of all, the rule of law and the norms of democratic government have been almost completely unraveled. The position of the judiciary has been throttled as has, no less significantly, that of the Knesset. The position of the executive branch and that of the person at its helm has been elevated beyond imagination. And individual citizens have been cast adrift in this morass.

Second, the already depleted role of political parties as the vehicles for the aggregation of the preferences of Israeli citizens has been mortally stricken. Without confidence in political parties, the opposition — one of the key checks and balances in democratic systems — is effectively emasculated. Recent Israeli history demonstrates how debilitating such a possibility is for Israeli democracy.

Third, the institutional mechanisms of democratic government are being pulverized. The basic notion of checks and balances in order to protect citizens from the abuse of power by those in control is dissolving. The need for accountability is being systematically ignored. And just when people are striving for authoritative facts, transparency is lacking. The tools of democratic rule are virtually paralyzed.

Fourth, the cynicism accompanying moves at the level of government have obfuscated — if not completely distorted — fundamental democratic values. Absent from the discourse of the partners of the coalition-in-the-making in the past few days has been any reference to the egalitarian foundation of democratic constructs, to their inclusive character, to their essential tolerance and to their respect for human dignity. Without the constant nurturing of this value base, democratic regimes are doomed.

Beyond these regime concerns is the question of governance at the state level. The departure point of the realignment of recent days is that the multi-faceted crisis instigated by the coronavirus crisis necessitates a reinforcement of state capacities. These, however, have been either distorted or misdirected during the past decades. On the economic level, income differentials have spiked. On the social level, gaps have widened precipitously. Much of the responsibility for social welfare has been either privatized or thrust on an impoverished third sector. Whatever solidarity survived the year of electoral indeterminacy is being whittled away by personal and communal insecurity. If there is consensus on anything, it now revolves around the need to increase state involvement and to improve its efficiency.

However, just when the state is regaining ascendancy as a key actor, state capabilities are at an ebb. The mobilization of the state apparatus during the corona crisis to date has been wanting. The health system is suffering from years of cutbacks and its ability to cope with the enormity of the crisis is limited. The rising national deficit has left the economy unprepared for the immensity of the tasks ahead. Social welfare operations are in shambles and state activities lack coordination. Trust in state capacities has waned (the case of testing for the coronavirus is one case in point). And inevitably, state efficacy has suffered.

Finally, Israeli society, purposefully wracked by internal divisions for too long, remains deeply polarized and highly fragmented. While many Israelis have once again rallied impressively to help those in need and to boost the morale of the indigent and the disempowered, all too often deep-set discrimination persists even though the pandemic does not distinguish between national groups, sectors, geographic locations, religions or gender. The task of rebuilding mutual trust is staggering.

Israel is in the midst of a broad multi-system breakdown, with the political crisis just the tip of the iceberg. Its rehabilitation will take much more time than the durability of the virus that set it in motion. Now is the time to deal with the immediate dangers and to initiate preparations for the lengthy process of rehabilitation. Whether heartbroken, dazed, apathetic or gratified, the Israeli public has to begin to look ahead. This requires not only patience, but also an understanding that what was is no longer and that what will be is still unknown.

Major multi-faceted upheavals have historically been followed by major systemic changes. In the past post-crisis challenges have invited either highly authoritarian, extremely insular, or sophisticated democratic alternatives. This is where Israeli creativity must come into play. How Israeli society and its polity navigate the near future will have a direct impact on how the country reframes its vision, its environment, its institutions and hence its future. One thing is certain: Israel after the coronavirus will not be the same. 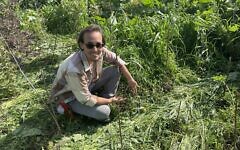