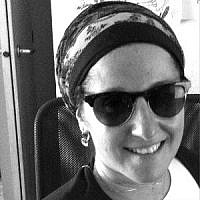 The Blogs
Cigal Gabay
Apply for a Blog
Advertisement
Please note that the posts on The Blogs are contributed by third parties. The opinions, facts and any media content in them are presented solely by the authors, and neither The Times of Israel nor its partners assume any responsibility for them. Please contact us in case of abuse. In case of abuse,
Report this post.

We were just a “pilot trip.” The first one ever. We were a test drive…A trip of a lifetime, yet quite tentative in its nature, as no one was sure whether there would ever be funding for another March of the Living. Hundreds of teens from Canada, the United States and various other countries from around the world participated.

First we went to Prague, then Terezin, Lidice, Warsaw and Krakow. And then we visited the death factories, Auschwitz and Birkenau. The empty cans of Zyklon B, the suitcases, the eyeglasses and the human hair. Real and right there, within our grasp. I feel like a big part of my innocence was lost that day. And a bigger part of my faith and deep love of my Nation was claimed. We were trailblazers. Pioneers, on that very first March of the Living, where hundreds of teens from all over the world marched, filled with youth, innocence and life, blue drops of hope wearing our blue jackets, while experiencing every type of weather on that incredibly solemn day. I was a trailblazer for my family. At the tender young age of fifteen, before any other family member did, I set foot on the ashes of my extended family. My father and his sisters survived the horrors of the Holocaust, yet their parents and brother didn’t. Following my trip, slowly but surely, family member after family member started going to pay tribute.

And then the next day, it was Majdanek. We went there thinking we had seen the worst at Auschwitz and Birkenau. Our young and naive selves felt that we could handle anything after what we’d seen at Auschwitz. We were wrong. The mausoleum is imprinted in my brain forever. Human ashes of the victims of the camp, all piled up under one roof. Thirty years later, I can still hear the chilling screams and cries that came out of us, innocent 15 and 16 year olds. The sobs. The empowering and heartfelt songs like “Eli Eli” coming out of our young lips…The crematorium, the ovens, the human bones and the blue stained gas chambers. It all remains a vivid and powerful memory within me.

I grew up as a traditional Jew with parents who instilled in me a deep love of our traditions as well as a deep love of Israel and her people. When our trip landed in Israel, I remember a friend of mine and I stepped off the plane onto the tarmac, and fell to the ground, embracing and kissing the beautiful soil that is ours, with tears streaming down our faces.

To this day, I believe that my father’s parents and his little brother were with me on that trip. They were a religious practicing Jewish family before Hitler ripped that away from them and left my father and his two sisters as orphans, alone to face the big scary world.

It took years of my own life experiences, but until this day, I feel strongly that the March of the Living played a tremendous role in me choosing to become an observant Jew and to ultimately make Israel my home, the place I would find my husband and create a beautiful family, with children who will, G-d willing, carry the torch of remembrance and pass it onward to their children. I pray that one day, my children can experience what I did in Poland. No textbook or movie on the planet can transmit the raw feelings of reality and truth as seeing it all before your very own eyes.

Thirty years later, on Yom HaShoah, having made aliyah almost 14 years ago, I can still envision all the places we visited in Poland. My heart still stops as I stand still for the siren and as the tears stain my face. And then I remember that Israel was turning 40 years old when I was on the March. And this year, she turns 70. I feel proud and empowered, as I am keeping my grandparents and uncle’s legacy alive by living a life of Torah and loving kindness in the land that G-d gave to me and my beautiful nation. I am proud to be raising my children with that same legacy. Thirty years later and counting, I feel blessed.

About the Author
Cigal Gabay is a trained school counselor and a family therapist who's starting to see divorcees and their children in therapy. Her world's greatest passion is helping people heal and become their best selves.
Related Topics
Related Posts
Cigal Gabay
Comments