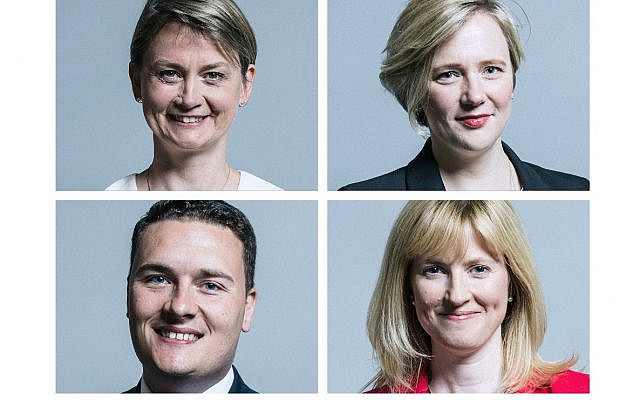 Labour MPs who have been attacked online for remaining in Labour, but defended the Jewish community in the antisemitism row. Left: Yvette Cooper and Wes Streeting. Right: Stella Creasy and Rosie Duffield (Jewish News)

There is a great deal of discussion now, both in social media and the public prints, about that now tired term, “complicit”.

It’s mainly applied to Labour MPs, who have for a long time been supportive of the Jewish community in its seemingly never-ending fight against antisemitism in the Labour Party.

At the 2017 election, it could just about be argued, candidates on the doorsteps of Britain were asking for a personal vote, not a vote for Labour leader Jeremy Corbyn.

As we approach this deeply unpopular 2019 election, in which everyone ought to be a loser, we might consider that too many horrible things have happened to make that a viable proposition.

Too many people have been driven out of Labour by the twin evils of antisemitism and misogyny; too many cases such as Chris Williamson, in and out of Labour like a revolving door; too many disgraceful attacks on the Labour whistleblowers who appeared in Panorama; and, most importantly, that the Equalities and Human Rights Commission is about to release its report — sadly, not until after the election — investigating whether Labour is an institutionally antisemitic party.

I’m beginning to see the attacks escalate on people of goodwill.

From verbal jeers — such as those directed at MP Lucy Powell when she spoke at an Enough is Enough rally in Manchester, so that she was forced to stop and protest that “I’m on your side” — to pretty full-on nasty tweets on social media.

People like Wes Streeting, Yvette Cooper, Stella Creasy, Rosie Duffield, are being attacked for their messages of support.

They are “mealy-mouthed”, apparently; they are “careerists” or “carpetbaggers”. They are now being told, stop with your “fake” tears, your sympathetic tweets. What are you actually going to do?

I have to say that I find this kind of behaviour utterly pointless and, indeed, counter-productive. Why alienate the few friends we have? What is the point of metaphorically yelling at people, many of whom have really stuck their necks out for the Jewish community, because they have the temerity to want to continue in politics?

I certainly don’t agree with those who continue to ask for a vote for a Labour Party headed by Jeremy Corbyn.

But I also wonder at the split attitude of those who are attacking the Streetings and Duffields of this world — but cheering on tough Jewish women such as Margaret Hodge and Ruth Smeeth, who have chosen to stay inside Labour and fight.

In any case, it’s not such an easy ask, this “what are you going to do?”

Like it or not, antisemitism is not always going to be front and centre of even the most sympathetic politician’s mind, and a mass resignation is not only unlikely but unrealistic.

How would we feel if asked to give up our entire career and livelihoods?

Besides, there is another factor: I don’t want to see a Labour Party totally devoid of people who are ready to speak up for us.

And that’s what we are getting if we continue with this “everyone is complicit” line.

So this is just what I already feel is a hopeless plea, to ask those people attacking political allies to give it a rest.

We need all the friends we can get.