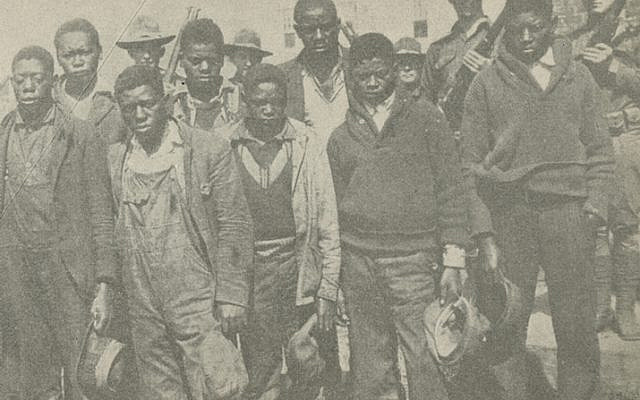 The Scottsboro Boys in a pamphlet published by the International Labor Defense, 1931 (Collection of the Smithsonian National Museum of African American History and Culture, Gift of the family of Dr. Maurice Jackson and Laura Ginsburg / Public domain)

From the hobo jungles of the American south to the Yiddish stages of Eastern Europe, news of the affair and the injustice that followed spread quickly.

Two white women of “easy virtue” (in the words of the judge in a subsequent legal proceeding) had claimed to have been raped by a gang of Black teenagers. Following a three-day trial, all but one of the nine defendants were sentenced to death.

The “Scottsboro Boys,” as they came to be known, lacked suitable legal representation. The case was almost completely based on questionable testimonies, with little evidence presented before the all-white jury. Hundreds of angry white locals kept at bay outside the courtroom by National Guard troops had demanded justice, insinuating that they would take matters into their own hands in case the court happened to not reach the “right” conclusion.

Outcry following the death sentences came quickly. Civil and Black rights groups across the United States denounced the trial and its unjust outcome. Justice for the young defendants was quickly adopted as a cause by activists across the globe. Protests were held outside American embassies and consulates abroad. 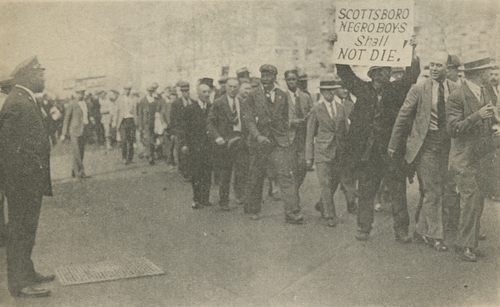 Protestors on the cover of a pamphlet published by the International Labor Defense, 1931 (Collection of the Smithsonian National Museum of African American History and Culture, Gift of the family of Dr. Maurice Jackson and Laura Ginsburg / Public domain) 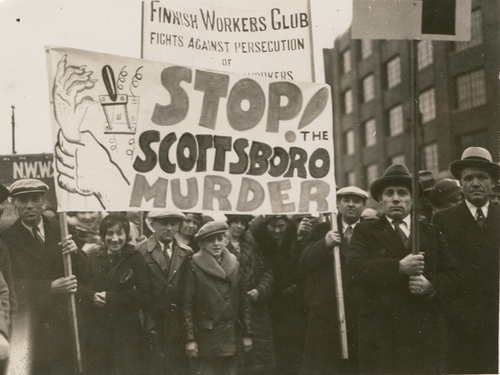 In the years (and decades) to come, the affair inspired countless works of literature across the racial and geographic spectrum, from Langston Hughes to Yiddish playwright Leib Malach, whose work based on the events debuted in Warsaw in 1935, as the actual case’s legal proceedings were still ongoing. The locally and internationally acclaimed play highlighted the injustices of the American South, resonating with Eastern European Jewish audiences. Even though the real case took place in the neighboring state of Alabama, Malach named his work “Mississippi.” 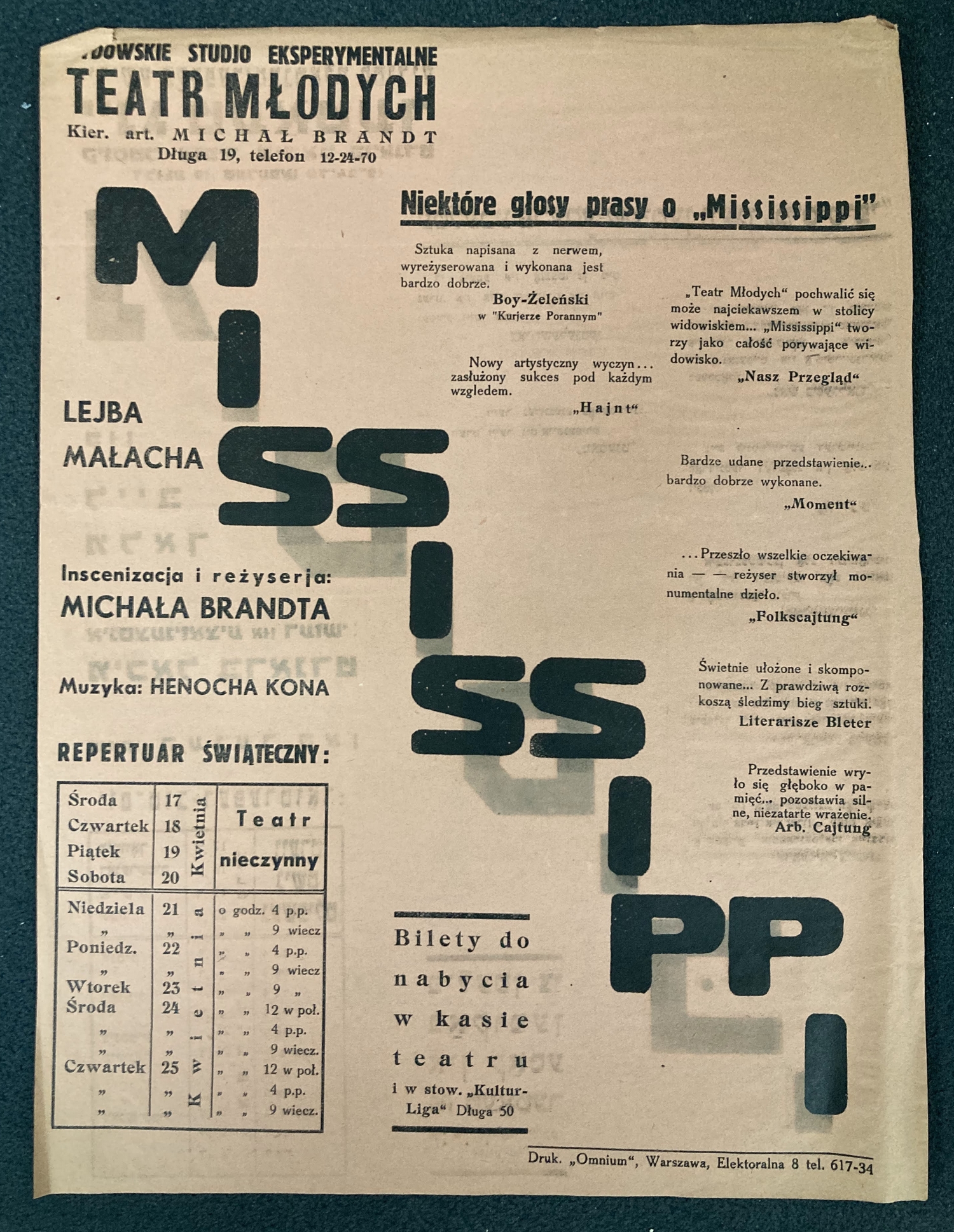 Poster for the original 1935 Warsaw production of Leib Malach’s ‘Mississippi.’  (From the Leib Malach Archive, National Library of Israel)

Soon after the initial verdict in the Scottsboro case, one of America’s most celebrated lawyers – a New York Jew who had never lost a single capital case – would be called in to lead the retrial efforts.

Not yet 40, Samuel Leibowitz was by then one of the most well-known, successful and flamboyant defense attorneys in New York, defending numerous well-known clients including notorious mobster Al Capone.

By late 1932, the International Labor Defense (ILD), a legal organization founded by Clarence Darrow among others, which was associated with the Communist movement, had taken the lead in defending the Black youths. The case was generally seen by the Communist leadership as an opportunity to not only achieve justice for the “boys,” but also to secure significant support for Communism among Blacks in the United States.

Samuel Leibowitz, however, was not a Communist. Before agreeing to defend the Scottsboro Boys alongside the ILD’s general counsel, Joseph Brodsky, Leibowitz demanded that he be allowed to manage the defense without any political interference. He also refused any payment for his services, paying all expenses out of pocket.

He had reviewed the case thoroughly and perhaps out of arrogance or simple naïveté, Leibowitz was convinced that there was no way he could lose.

According to Leibowitz’s son, who wrote a book chronicling his father’s legal career, the elder Leibowitz told Brodsky:

… no matter what the prejudice may be, there is a basic rock of decency in every individual… We cannot lose this Scottsboro case. A Chinaman or a Zulu lawyer, barely able to speak pidgin English, must get an acquittal if the evidence at hand is presented to even twelve of the most bigoted, prejudiced creatures that can be corralled into a jury box.

The fact that Leibowitz was Jewish and brought in by Communists certainly did not help his cause – nor that of his clients – once the retrial commenced. His style and bravado were not welcome in northern Alabama. His New York manner and approach were seen as discourteous, not suitable to Southern mores. The courtroom was appalled, for example, when at one point he demanded that the prosecutor address a Black witness as “Mr. Sandford,” rather than simply as “John.” 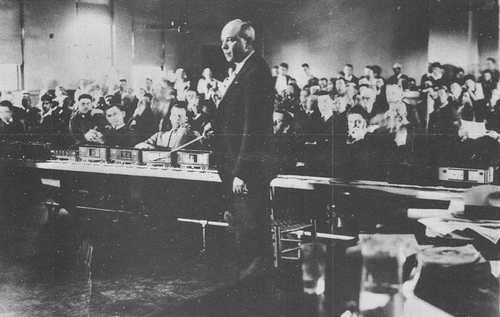 Leibowitz in the courtroom during the Scottsboro case. He used the trainset behind him to try and discredit the alleged victim’s account of the events. (Published in The Forward on April 16, 1933; available via the National Library of Israel Digital Collection)

Born in Romania, Leibowitz had immigrated to America with his family when he was 4 years old and studied law at the prestigious Cornell University. In an April 1933 interview, in which he asserted that he was “strictly Orthodox” and had had a Passover seder after he returned from the trial, Leibowitz exclaimed that “The snake of anti-Semitism cannot live in the spotlight of public opinion.” He recounted that when someone suggested he change his name to something less Jewish, “I promptly told him to go to hell.” And, in fact, antisemitism played little to no role in Leibowitz’s personal and professional life — until the Scottsboro case. 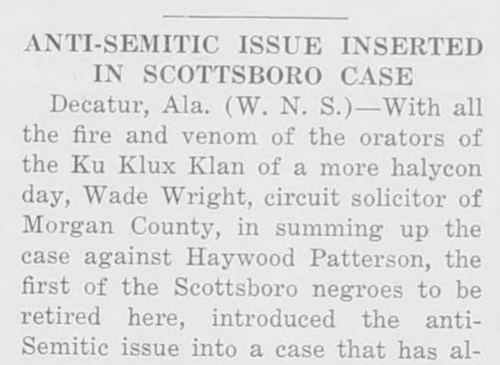 (Published in The American Jewish World on April 14, 1933; available via the National Library of Israel Digital Collection.)

Prosecutor Wade Wright peppered his arguments with blatant antisemitic language and innuendo. After one of the alleged victims recanted her claim that she had ever been raped at all, and her new testimony was corroborated by someone named Lester Carter, Wright referred to the man as “Mr. Carterinsky,” describing him as “the prettiest Jew” he had ever seen. Alluding to the traditional Jewish peddler, Wright declared that if Carter “had been with Brodsky another two weeks he would have been down here with a pack on his back a-trying to sell you goods…”

In his closing remarks, Wright asked the jury, “Is justice going to be bought and sold in Alabama with Jew money from New York?”

Leibowitz responded with the following words:

I am proud of my state. I would die for it just as I would die for my nation. We have as decent people in New York as you have in Alabama. They talk about Communists to befuddle you. I’m a Roosevelt Democrat and I served my country when the Stars and Stripes were in jeopardy and when there was no talk of Jew or Gentile, white or black…

And they talk of ‘Jew money from New York.’ I’m not getting a cent for my services, or even for the expenses for myself or my wife down here. I’m not interested in Communism or any other ‘ism.’ I’m interested solely in seeing that that poor, moronic colored boy over there and his co-defendants in the other cases, get a square shake of the dice, because I believe, before God, they are the victims of a dastardly frameup…

Let them take me out and hang me. My mission will have been served if I get these unfortunates the same justice that I would seek to achieve for any of you gentlemen if you came to New York and were unjustly accused…

He called the previous trials “an insult to God himself and a mockery of justice,” and argued that the prosecution was simply “appeal[ing] to prejudice, to sectionalism, to bigotry…”

Before the re-trial started, Brodsky had countered Leibowitz’s confidence, telling him that he would “be a sadder but wiser man” after the trial. And, in fact, Brodsky’s prediction proved more accurate than Leibowitz’s, as the first retrial ended with another guilty verdict and another death sentence.

His participation and the involvement of other “outsiders” had not always been welcome, even by the defendants and their families themselves. It was sometimes seen as a distraction or even a hindrance, as the white jury resented the interference of the Northern outsiders. The defendants and their lawyers were surrounded by armed guards, following repeated threats to lynch them. 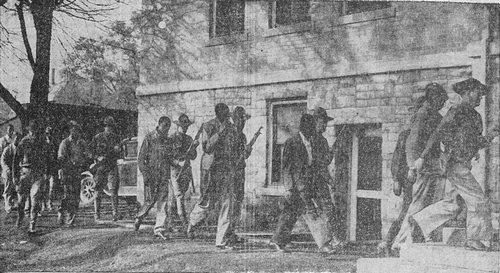 The Scottsboro Boys under heavy guard. Published in The Forward on April 7, 1933; available via the National Library of Israel Digital Collection 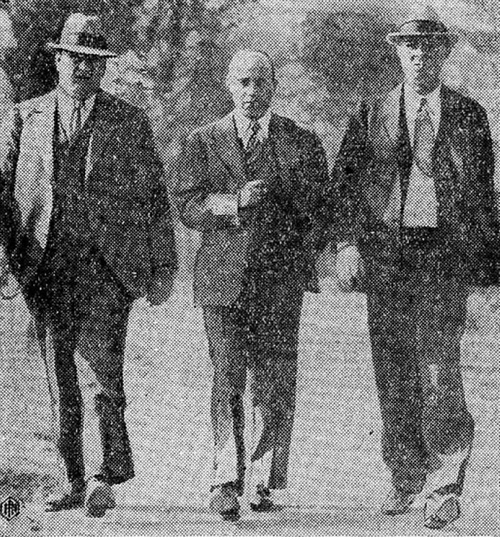 Leibowitz leaving the courthouse flanked by two bodyguards, who were appointed by the judge following threats to the lawyer’s life. Published in The Forward on December 2, 1933; available via the National Library of Israel Digital Collection

Yet Leibowitz and his team kept fighting. One of his main initial points of attack – that Blacks had been excluded from serving on the original jury – ultimately helped set an important legal precedent that would ensure Black inclusion on jury rolls across the United States.

The Scottsboro Boys spent years in prison, but thanks to the efforts of Leibowitz and others, they were all ultimately spared the death sentence. In the years and decades that followed, all of the “boys” had their convictions overturned or were pardoned. This included three posthumous pardons granted by the governor of Alabama in 2013, more than two decades after the last of the Scottsboro Boy passed away.

Leibowitz stayed in touch with some of the Scottsboro Boys, even providing personal and professional help and support. In 1937, there were reports that his birthday would be celebrated as a “national” holiday by the American Black community, though that didn’t seem to ever materialize in any notable way. Leibowitz defended a few more high-profile clients and then became a judge, ultimately serving on the New York Supreme Court.

According to Quentin Reynolds’s book, Courtroom, a few years after Leibowitz’s involvement in the Scottsboro trials, he was on vacation in Miami and decided to visit a local courtroom in session. He noticed that there was a single Black man on the jury and when the proceedings recessed, he told the defense attorney that he had a question.

“I’m from the North, and I never knew you allowed Negroes on your juries here in the South. Isn’t that something new?” he asked.

The lawyer bitterly responded, “Yes it is something new. This is the first time in our state we have had a n***er on a jury and it’s all on account of a son-of-a-bitch named Leibowitz from New York. He came down to Alabama a few years ago to try a case and somehow he got to the Supreme Court in Washington, and damned if we haven’t had to put n***ers on our juries ever since.”