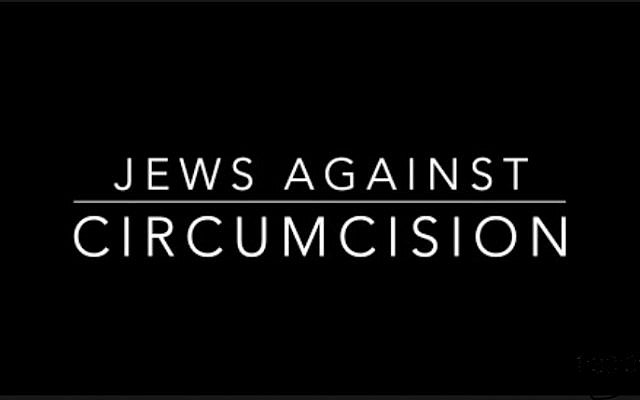 I hesitated to write this. Spending time responding to fringe anti-circumcision groups only gives them more exposure and that’s the last thing they need. But I’m violating my policy because this specific organization is targeting a central place in my life — the synagogue.

The Times of Israel reports, “Bruchim (literally “blessed,” but part of a Hebrew phrase that essentially means “welcome”), is seeking to normalize the decision not to circumcise Jewish boys, a venerable religious rite that goes back to the Bible and which is widely practiced across the spectrum of Jewish observance, even by otherwise non-observant Jewish families […] The group is an outgrowth of advocacy that [Lisa Braver] Moss and Bruchim co-founder and executive director, Rebecca Wald, have been doing for decades. Moss first argued against Jewish circumcision in a 1990 essay, and together they outlined an alternative ceremony, brit shalom (literally “covenant of peace”) in a 2015 book and distributed flyers at that year’s Reform movement convention outlining ways for synagogues to be more welcoming for families that had opted out of circumcision.”

As a rabbi, I work to be as inclusive as possible. I spend most of my time trying to find Halachic answers to real-life problems — whether it be performing britot for the baby of a mixed married or serving as the Misader Kiddushin for the marriage of a convert and a Kohen. But this is problem I will never try to solve. Ever.

What Wald and Moss fail to understand is that they are working to kill the Jewish people from within. As if it wasn’t bad enough trying to scare Jews away from our most basic mitzvah of Brit Milah (which is safe), they are now trying to persuade the Jewish community to openly accept this behavior. The answer to this request needs to be a resounding “No.”

It is true that we are no longer the only community who performs this rite. Although on the decline, still around 70% of American baby boys are circumcised. As the Baal HaTorim put it, Brit Milah is the only mitzvah that’s inscribed in our flesh, which can’t be taken off. In days of yore, if an opposing nation wanted to know if the men in their midst were Jewish, they merely had to check because we were the only ones circumcised. And even though the distinguishing mark has become watered down by all those around us realizing the benefits of the procedure and joining in, it still is our most important national identity mark. To abdicate it as a nation is to give up what has bound us to the All-Mighty Creator and his first servant Avraham some 4,000 years ago.

Bruchim, through its work, is creating a group of Jews who, by their own actions, are exactly the opposite of blessed and welcome. If Moss and Wald were to succeed in their mission, it would lead to the destruction of the Jewish people. It’s just as much a direct attack on our people as any attempted irradication by host nations throughout our history. Only it’s more insidious because it comes from within. It’s our own flesh and blood.

Since Brit Milah is the last mitzvah that binds all the movements together, we need to stand unified, from Reform to Orthodox, and reject this attempt on the life of Am Yisrael. It may feel like a loss because these Jews who aren’t circumcising their children may be pushed away; and in my rabbinate, that’s the last thing I ever want to do. I’m much more inclined to bring people in and hope for the best.

But this is not the time for best outcomes. This is the time to draw a line in the sand and say, in this regard, we have an uncompromising standard. I pray that this firm stance will convince those vacillating to come back into the fold. The other option is not a chance we can take.