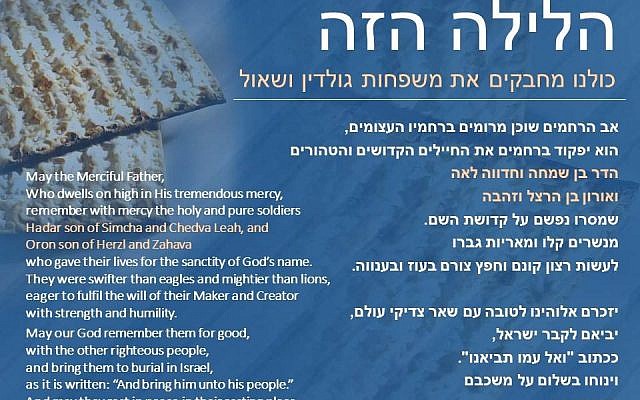 When my youngest son, now a soldier in the Israeli army, was 7, he could recite the Hebrew names of eight missing Israeli soldiers and one captive reservist by heart, complete with their last names and the names of their mothers. We stared at him in amazement as he rattled off “Yekutiel Yehuda Nachman ben Sarah (Katz)” and were sad that this was part of his reality as a child living in Israel.

The setting was at our Friday night dinner table. Moved by the plight of families of soldiers who were missing in action or being held captive, after we blessed our own sons, my husband and I added an additional prayer that named the MIAs by name.

For eight years, we continued this practice. Five MIAs remained constant, and continue to be relevant until today: Yehuda Katz, Zachary Baumel, and Tzvi Feldman, three soldiers missing since the battle of Sultan Yacoub; Ron Arad, the Israeli navigator who disappeared in 1986; and Guy Hever, who vanished in 1997. Other names came and went as the captives or their remains were returned: Adi, Benny, and Omar; Ehud and Eldad; Elhanan Tennenbaum, and Gilad Shalit, who was abducted in 2006 and was released in exchange for 1,027 prisoners in 2011.

On the Friday night after the Shalit exchange, we stopped. Why? For starters, over the years, the ritual had become less and less comfortable. We discovered that, at times, we had been praying for soldiers who we were led to believe were still alive even though the Israeli authorities knew that they weren’t. Once Gilad Shalit was released, it was clear that none of the missing were living, which made the matter seem less urgent, and many people were troubled by the exorbitant price extorted for his release. Perhaps most importantly, as our two youngest sons approached conscription age, we did not want them to have a weekly reminder of soldiers who were taken captive and whose bodies were never returned.

Staff Sergeant Oron Shaul left his armored personnel carrier on July 20, 2014 during Operation Protective Edge in Gaza to repair it when Hamas attacked his unit and took him prisoner. He was originally declared missing, but after an investigation, the IDF determined that he had been killed in action. In March of this year, his family, who originally accepted the decree, filed a lawsuit in the Supreme Court demanding to see the evidence on which the IDF declared him dead. 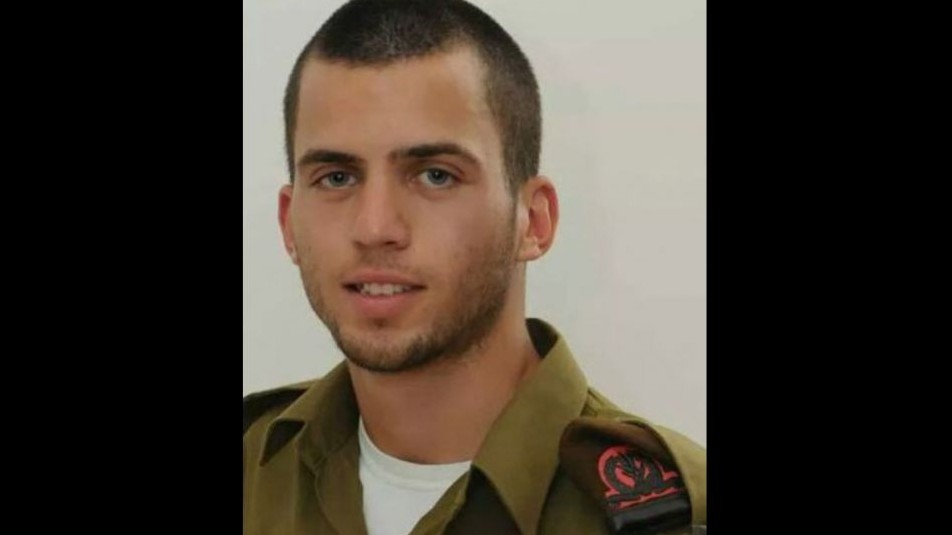 Lieutenant Hadar Goldin was kidnapped by Hamas in Southern Gaza on August 1, 2014, an hour and a half after an agreed upon humanitarian cease fire went into effect. He was whisked into an underground tunnel and was separated from his fiancée Edna and his twin brother Tzur forever. Based on forensic evidence, the IDF determined that Hadar had been killed in action. His family held a funeral for him and have been working tirelessly to bring his remains to their final resting place in Israel ever since. 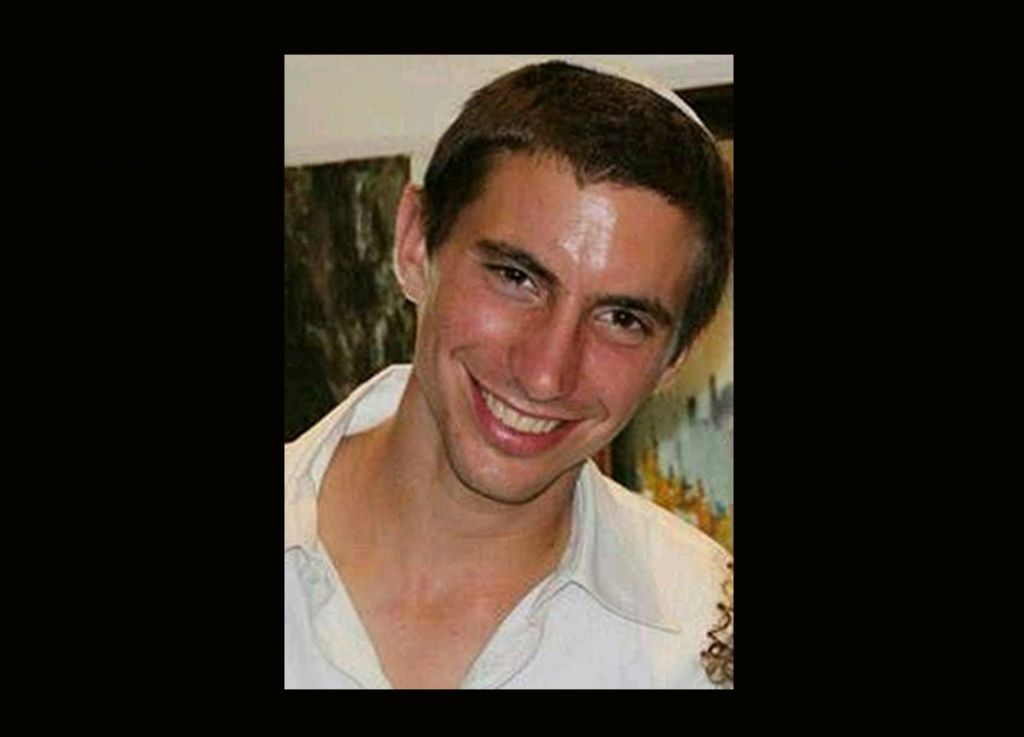 In the almost three years since the dreadful summer of 2014, however, Hadar and Oron’s remains have not been returned to Israel for burial, in violation of the Geneva Conventions, leaving the Shaul and Goldin families in a perpetual state of limbo and anguish.

As Passover approaches and I contemplate my first seder ever without one of my sons, a soldier who is guarding an isolated kibbutz, I can’t shake the images of Hadar’s radiant smile and Oron’s soft gray eyes. I can’t bear the thought that, as I sit down to my seder to pass the story of the Exodus down from generation to generation, knowing exactly where my missing son is, two families will be sitting down to their seder without closure. Leah and Simcha Goldin will sit down at their seder knowing that Hadar has not had a proper burial, while Zahava Shaul will sit down to her seder without her son Oron, without faith in the system that told her that her son was killed in action, without her husband Herzl, who died of cancer while waiting for his son to come home, and with the belief that her son is alive and being held in captivity.

But what can I do? And what can you do?

As we come into the homestretch before Passover, here are some ways in which you can remember #HadarAndOron as you prepare for the holiday and at the seder itself:

However you choose to remember Hadar and Oron, find a way to communicate that with others. Write a post describing what you did or share a photograph of your set table or of drawings of hearts, flowers, or Israeli flags by your children on social media. And be sure to use the hashtag #HadarAndOron so as to bring your efforts to the attention of their families and bring their loved ones some solace and comfort.

Batya Arad went to her grave not knowing the fate of her son Ron. Yona Baumel was laid to rest never having brought his son Zach to a resting place of his own. Herzl Shaul succumbed to cancer while lobbying to discover what happened to Oron. Bereaved families on all sides must be given the opportunity to separate from their loved ones, internalize their loss, and bury their dead.

This Passover, we may not be able to convince Hamas to let our people go. But we can stand with Zahava Shaul and with Leah and Simcha Goldin, their children, and their extended families, identify with their suffering and sacrifice, and give them a loving virtual embrace as we recount our national journey to freedom.

May the Merciful Father,
Who dwells on high in His tremendous mercy,
remember with mercy the holy and pure soldiers
Hadar son of Simcha and Chedva Leah
and Oron son of Herzl and Zahava
who gave their lives for the sanctity of God’s name.

They were swifter than eagles and mightier than lions,
eager to fulfill the will of their Maker and Creator
with strength and humility.

May our God remember them for good,
with the other righteous people,
and bring them to burial in Israel,
as it is written,
“And bring him unto his people.”
And may they rest in peace in their resting place
and let us say Amen. 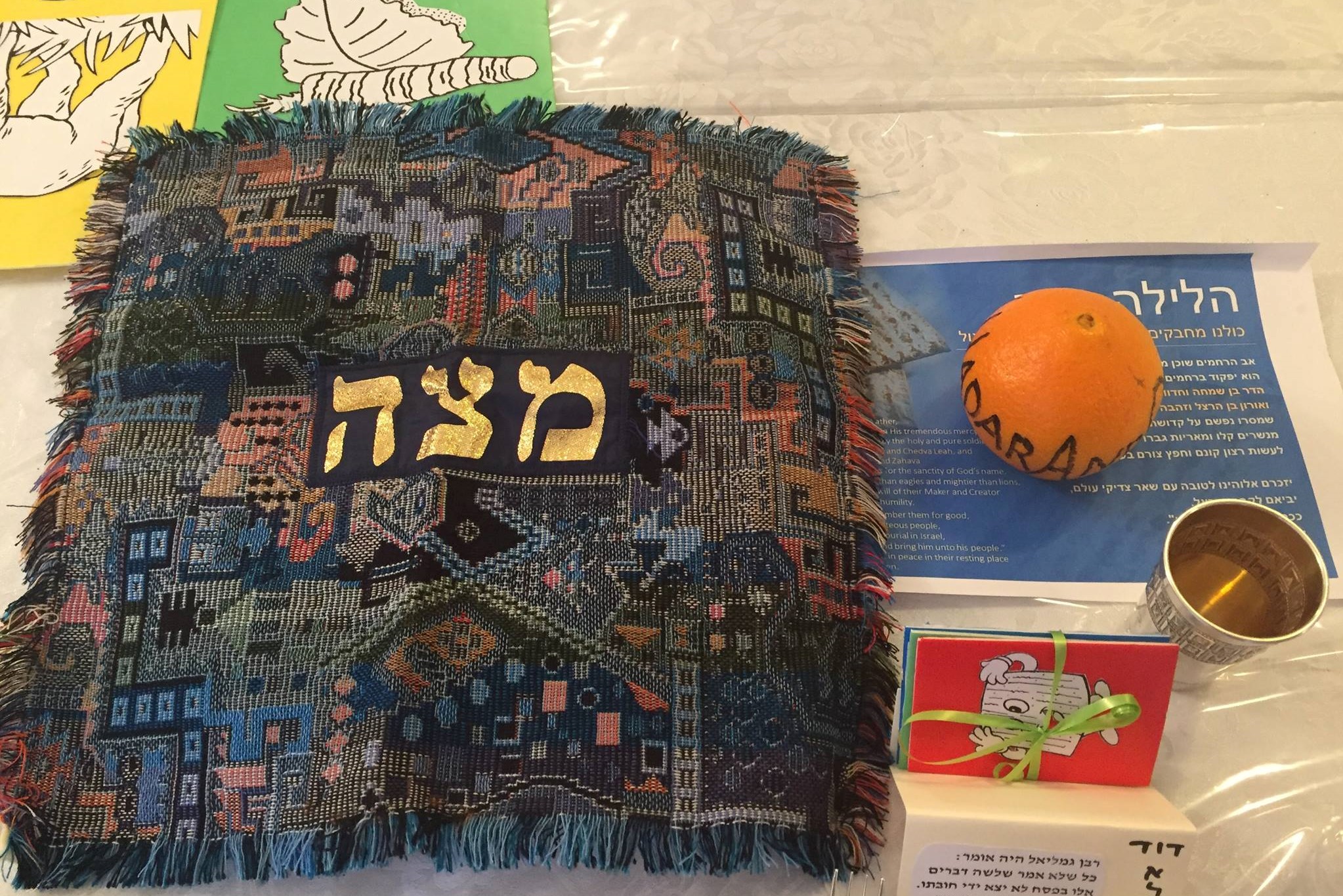