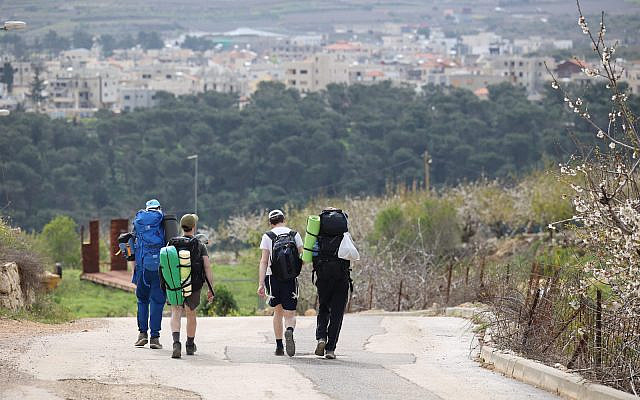 It’s been a while since I made aliyah.

And like all olim (immigrants) I quickly realized after my first-ever one-way flight to Israel that aliyah was not merely a moment-in-time event but rather a process of getting used to life in a familiar but new land, where memories ran deep but everything seemed completely new.

I realized that I forgot to try to learn some Hebrew before I arrived and that I had fallen in love with Eretz Yisrael (the Land of Israel) but didn’t know much about Medinat Yisrael (the State of Israel).

It was a journey of funny moments, embarrassing moments, and challenging moments, but also inspiring and emotional moments that made me realize that I had made the best decision in my life by joining the movement of the Jewish people back to their homeland and back to nationhood.

But even after I have acclimated to life in Israel so much that landing in America feels like arriving in a foreign country and speaking a sentence in English without a splash of Hebrew seems like a linguistic accomplishment, the memories and nostalgia for “the old country” sometimes surface and make me wonder what it would be like if I never left…or if I returned.

But when they do, I only have to think of one thing to shake that daydream out of my head.

And this summer in Israel has only strengthened and reinforced that one specific thing.

That one thing is my kids.

The joy and appreciation of watching them be born and raised in this place, in this land, in this country is something I never considered when compiling that mental list of arguments for and against moving to Israel almost 20 years ago. I simply could not have understood back then the ways in which Israeli society would impact their lives and shape them into the people they are becoming.

And it’s not just the fact that they are growing up in the Jewish ancestral homeland, speaking Hebrew and living in a country and culture that is guided by and saturated with Jewish tradition. Those are all amazing, for sure. But it runs deeper than that. It’s the character of this country and the story that is being lived out here every day that seeps into the events of my kids’ lives and affects how they think, how they view the world and how they live in the world.

This summer brought this realization into sharper focus more than ever as I watched our oldest (14 years old) leap into Israeli teenagerhood. No longer satisfied with expressing his independence by taking busses to visit friends in nearby towns or go to the beach, he’s now crisscrossing the country for day trips to Jerusalem and Tel Aviv and heading up north for multiple days camping by the Kinneret or consecutive days hiking in the Galil. (When I was his age, I expressed my independence by taking the bus to the mall with my friends.)

Being that he’s our first teenager, I wasn’t quite ready for all of this newfound independence but after gauging how calmly his friends’ parents reacted and acted, I quickly realized that it’s part and parcel of being an Israeli kid. Not relying on parents to always take them places and not relying on them to make their summer plans. Israel is a do-it-yourself and get-off-your-butt-and-do-something kind of society and kids begin learning that from an early age here.

Already from first grade, school trips are about exploring the country’s history through hiking the great outdoors, rather than walking through museums, forcing kids to move their own two feet in order to create memories with their classmates and friends. And youth group is a place with no adults and no paid staff, where all activities and excursions are planned and led by only slightly older (and only slightly more experienced) teenagers. The “balagon” (chaos) that sometimes ensues as a result is part of the experience, part of the fun, and part of the personal growth, teaching kids the invaluable skill of being able to “lizrom”, to go with it, be patient, be flexible and make the best of any situation.

And these life experiences for kids in Israel combine to teach them the important life lessons of: “You can do it,” “We believe in you,” and “Don’t be afraid to fall or fail.”

It’s a different world than the one I grew up in America, where parents and other adults led the way and planned your life and all you needed to do was follow. Israeli kids grow up knowing that once they begin to explore the world beyond their home and community, away from their parents’ protective hands, they will still find people, technically strangers to them but also members of the extended Jewish/Israeli family, who will look out for them, have their backs and lend a helping hand when necessary.

Maybe that’s why Israeli parents act and react so cool and collected when their kids take that first leap into teenagerhood with forceful confidence. Because in Israel, they know they are never really alone or far away from someone who cares. And they also know that, by taking that leap, they’re going to learn the skills not only necessary for living life, but for living life in Israel.

And that’s why whenever those “what if” daydreams of life back in America arise, all I need to do to make them go away is think about my kids- my Israeli kids, my teenage Israeli kids, growing up in Israel, as Israelis, with other Israelis who will, together with me, help give my kids something we Jews didn’t have for 2000 years: the knowing and the feeling that our religion, our birthplace and our nationhood have merged once again, giving us the ability “to be a free people in our land” once again.

A freedom my teenage son is very much enjoying this summer.