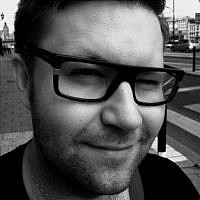 The Blogs
Kim Milrell da Costa
Apply for a Blog
Advertisement
Please note that the posts on The Blogs are contributed by third parties. The opinions, facts and any media content in them are presented solely by the authors, and neither The Times of Israel nor its partners assume any responsibility for them. Please contact us in case of abuse. In case of abuse,
Report this post.

Since my last post I have been to Israel and back. Again.
It was wonderful as always and yes, I started planning my comeback before I even arrived at Ben Gurion Airport to go back to Sweden.

While in Israel I posted a little speech in Hebrew (!) on my site Israelism.se.
It’s a little toda raba for the ahava I feel every time I visit Eretz.
Watch it here.

When I returned to Sweden another post-Israel depression knocked on my door. This time however, it wasn’t as bad as the previous seven depressions. Mainly because I together with friends decided it was time for another pro-Israel rally. And what a rally it will be!
This time not in -16°C, like in December 2012.

There will be some great speeches and of course Israeli music.
(What’s a party without music?)
The amazing Nicky Larkin will join us and we’ll watch his amazing documentary “Forty Shades of Grey”.

So, if you happen to visit Stockholm this Sunday, June 2, please pop by to say shalom!

Enough is enough! For Israel. Against anti-Semitism and anti-Zionism.
Now it’s time to once again come together and show our love for Israel while talking about and protest against the increased anti-Semitism and anti-Zionism in Sweden. There will be joy mixed with seriousness and we hope that many will come and share this day with us! Am Yisrael Chai!

Anti-Semitism and anti-Zionism continue to spread like a silent but deadly cancer in Sweden. Statements from people like Omar Mustafa, Ilmar Reepalu and Gina Dirawi are excused and not taken seriously. Bombings, threats and harassment of Jewish congregations in Sweden have no news value but become a short note at the back of our major newspapers. Israel is to be boycotted and if you are a Zionist you have to put up with constant anti-Semitic slurs. Reports of the Israel/Palestine conflict is always biased in the media and have been for so long that ordinary people really think that Israel is a rogue apartheid state. The list goes on and we say: Enough is enough!

We must speak up now before it’s too late! We need to highlight what is happening in this country (and in Europe) and together fight against the growing anti-Semitism and anti-Zionism! I believe in the goodness of people and that most Swedes do not comprehend what is going on. Debate articles and blog posts are great, BUT now it’s time for us to show the world that we exist and that we have had enough!

Come to the Raoul Wallenberg Square in Stockholm on Sunday, June 2 at 2 pm and shout out loud so the entire country can hear: Enough is enough! Bring Swedish and Israeli flags and a great mood! We will provide beautiful Israeli music, the best hummus in Sweden and amazing speakers! In addition there will be a screening of Nicky Larkin’s amazing documentary ”Forty Shades of Grey”!

I will let you know all about how the event went next week!

About the Author
Kim Milrell da Costa is a Pro-Israel blogger, writer, and activist from Stockholm, Sweden. However he currently resides in a small town in southern Finland. He writes about 'Everything Israel' on his website Israelism.se, and has worked for the World Zionist Organization's Swedish subdivision: The Zionist Federation of Sweden. He is also a news junkie and he cares too much about what's going on in the world. Constantly worried.
Comments