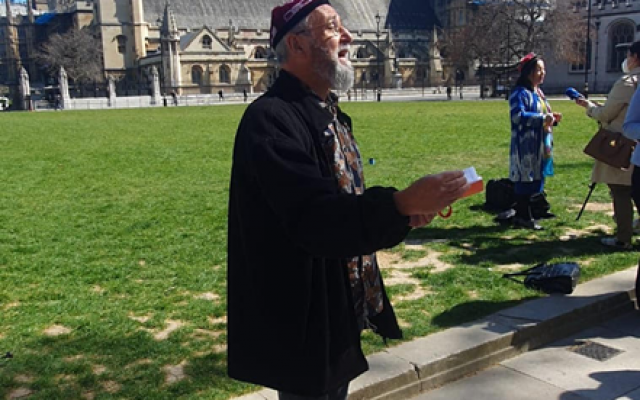 The author telling activists about the Omer, outside Parliament, before it unanimously declared China was committing Genocide against the Uyghurs.

How odd is this title for me?

In recent years many of my blogs have related Jewish festivals and fasts, history and religion to the Uyghurs’ on-going genocide, even connecting our Roman conquest and persecution to  the Chinese Government’s attempt to eliminate Uyghur identity, culture and religion.

It’s not just me! The international Jewish community have embraced the Uyghur cause. Events on Chanukah, Holocaust Memorial Day, Yom HaShoah and even Uyghur Sedarim replete with their own Haggadot! Last week, a United Synagogue conference asked the community to move “From Anguish to Action.”

But not last Sunday.

Not on Tish B’Av.

Sunday, I needed time to reflect on the Particularism of Jewish history, purpose, and national identity, not our Universalism. A process that had begun on Pesach.

It is an odd feature of Jewish life that, however old you are or however familiar with the festival themes, each year has something fresh to discover or revitalise. From Pesach this year I took a heightened sense of two things — a Journey still ongoing and a barely consummated Love Song.

The Journey had two destinations, as we left behind the slavery of Egypt, to embark on our national purpose. The first, as we began counting the 49 days of the Omer between Pesach and Shavuot, was to Har Sinai (Mount Sinai), to receive the Torah. The second was to our homeland, Israel, to live that Torah in perpetuity, a spiritual and physical journey that continues even now.

The Love Story (Song of Songs) features two besotted lovers. It is an allegory for the love between Israel and Hashem. What caught my attention, reading it in detail for the first time since I was 18, was that the lovers hardly ever meet. The tension is enormous, with each in almost perpetual search of the other. Disappointing? You bet! When they will finally be together?

But Judaism is full of tensions, including that between Universalism and Particularism. Commentators see these as reflecting the “Creation (Bereshit) Narrative” (where general ethico-religious principles feature more than detailed laws, rituals and customs) and the “Revelation (Sinai) Narrative,” which prescribes ritual and custom, translating ethical principles into detailed legislation. Which narrative is to be read in the light of the other, and when, has been debated since the days of Maimonides and Yehudah Halevy in 11-12th Century Spain (1).

There is a tension too within the ten commandments. The five inscribed on the first tablet of stone regulate an individual’s relationship with God (bein Adam ve HaMakom). The five on the second tablet regulate individuals’ relationships to each other (bein Adam le Chaveiro). Our sages say of the verses “You shall not have in your bag diverse weights, a great and a small…a perfect weight you will have” (Deuteronomy 25.13-15), that the word for weight, ‘even,’ (literally, ‘stone’) is used elsewhere to mean “luchot,” the tablets of stone. They read the verse to mean that for us to be balanced human beings, we must give the same weight to both sets of commandments (2).

I reflected on all this during the Omer, intending to write this on Yom Hazikaron, Memorial Day for Israel’s fallen soldiers and civilian victims of terror. These deaths can be considered the latest sad results of a chain of historical events, set in motion by our expulsion by Rome, which tradition teaches was a punishment for (or consequence of) Sinat Chinam (causeless hatred and internal division). I came to the following conclusion, which I couch, in typical Jewish fashion, as two questions.

Will the lovers of Song of Songs, Israel and Hashem, finally be with each other only when Universalism and Particularism come together, and the tablets of stone are given equal weight? Is that when our journey really ends?

I observed it as usual.

We came to Tisha b’Av, after enduring the terrible internally divisive events of the umpteenth Gaza war, and I asked myself, am I barking up the wrong tree?

Maybe I shouldn’t be doing all this Uyghur stuff?

Maybe I should be thinking about those divisions between Israelis (secular and non-secular), Charedim, Arab-Israelis, Palestinians?

Maybe that’s where the two narratives have most to be applied by Jews?

But Genocide is Genocide and Jews everwhere, including Israel, cannot and do not not stand aloof.

Our problems are much more nuanced, and harder to engage with fully, without living their reality.

As it says (Pirkei Avot 2:5), “Judge not your fellow until you reach his place.”

So…….am I living in the wrong country?