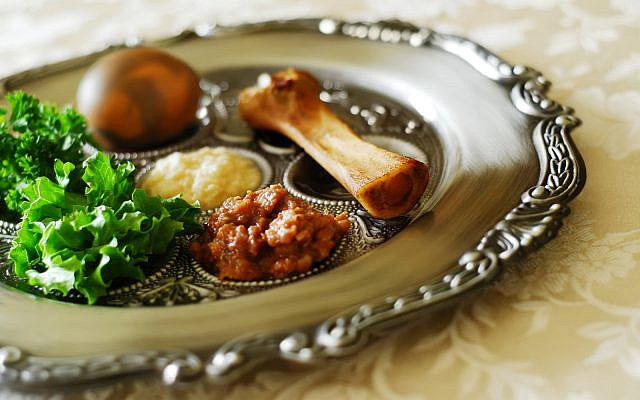 When we eat the maror at the Pesach seder, we dip it in charoset, which reminds us of the mortar used by the Jewish slave laborers in Egypt. Some people have a custom to shake off the charoset after dipping, so as not to dilute the taste of the maror. The reason for this is to ensure that the maror eating experience is fully bitter. If that means the raw, freshly grated horseradish makes my nostrils flare, and my face red, then I have – for a few minutes – truly felt bitterness.

We learn from this example that the seder experience needs to be immersive, and focused – ‘mindful’ if you will. When we recall slavery, it’s fully bitter. When we recall freedom, it’s authentic freedom. And when we celebrate the seder, it ought to be about… Pesach!

So this year, there will be six traditional items on our seder plate, as they have been every year at our seder, and that of my parents, and my parents’ parents, and so on.

While there will be no crust of bread or orange on the seder plate, everyone is welcome at our seder table. They come as Jews, irrespective of their sexual orientation, or their choice of partner. There will be no fair trade coffee, because our seder is about the Jewish slaves in Egypt, not slavery anywhere or everywhere else in the world. There will be no banana to recall the modern day exodus of refugees, because our seder is about the Jewish exodus from Egypt. No cashews for the Iraq war, no olives for peace between Israel and the Palestinians, no artichokes for intermarried couples, and no tomatoes for underpaid pickers. There will be a potato (which for some recalls the Ethiopian Jews’ exodus in 1991) because that’s what we use for karpas (far easier than eating raw onion or parsley). And the ice cubes… they will either be in the freezer or in a drink cup, because that is where they belong.

As per tradition, we will drink four cups of wine, and designate a fifth cup for Elijah the prophet, harbinger of the ultimate redemption. Miriam (sister of Moshe) had an important roles in the story of the exodus from start to finish – from watching over baby Moshe in the basket to leading the song after the splitting of the sea. She doesn’t need to have a cup designated in her name for her role and that of other women in the story to be recognised.

Pesach commemorates our birth as a people. That process began with God’s promise to Abraham, and culminated with our exodus from Egypt as a free nation. Since then, we’ve endured for well over 3,000 years of ups and downs and we’re still here, and we’re not going anywhere soon. As the seder liturgy states – “in every generation, they rise against us to destroy us, and God saves us”. I’d like to think there’s enough in that theme to fill an evening of discussion, interspersed with matza and the other rituals.

This is not to suggest that issues such as acceptance, diversity, inclusion, modern slavery, refugees, and peace in the Middle East are not important. They are all very important – in fact so important that they deserve to be considered at the appropriate time and place. There are 51 other weeks of the year when we can gather with good friends, food, and alcohol and conduct these discussions. And when we do sit down for a discussion about modern slavery in global supply chains, I don’t want to dilute that either. We won’t mix it up with talk of sexual equality, Middle East politics, Pesach, or intersectionality.

The Pesach seder is one of the most powerful instruments of intergenerational transmission of Judaism that we have. It embodies the key elements essential for this task: multiple generations of the family present in the room, a shared meal, and lots of storytelling of our history. These same elements have been successfully employed by other ancient cultures for thousands of years. We have endured as a people in no small part because every year we sit down and conduct this ritual.

To honor that ritual and allow it to work its magic, we need to fully engage in the experience, and be fully present. If we dilute the maror, or the content of the seder itself, the effect is diluted. If we make our seder about anything and everything, then it is actually about nothing.