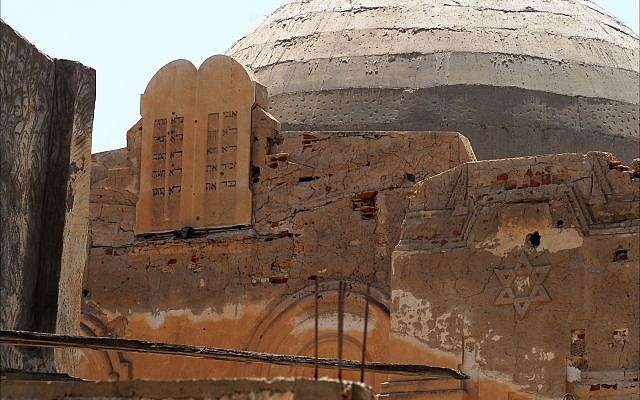 Illustrative. The Ten Commandments, engraved in Hebrew, and a faded Star of David are the only traces of Judaica left of the once-elegant Tripoli Synagogue — the spiritual home to thousands of Libyan Jews until its destruction in the wake of the Six Day War in 1967. (Larry Luxner/ Times of Israel)

In the words of Albus Dumbledore in the first Harry Potter book, “Fear of a name increases fear of the thing itself.” We might think invoking G-d’s Name frequently would elevate Him in the eyes of those who hear us – that it would “raise” (yisa) Him up (cf. Ohr Hachaim and others). In reality, His Name is lowered by overuse, as tossing it around casually demonstrates a lack of appropriate awe. If we make a point of avoiding saying G-d’s Name, we can build up a sense of appropriate awe and trembling with regard to Him.

Fast-forward, then, to this week’s parsha — specifically, to Exodus 23:13, “And regarding everything I have commanded you, you should be careful, and do not mention the name of other gods; it should not be heard upon your mouth.”

If we demonstrate respect for G-d’s holy name by limiting its mention to only the most serious contexts, it would seem logical to do the opposite with the false gods we reject. Why not say “Baal” all the time, just to show I believe the word is entirely mundane and I’m not afraid of him? If I go out of my way to avoid saying it, won’t that imply I have some respect for the god — or, as Dumbledore might have it, even instill some degree of fear of Baal?

There is too much exegetical and halachic discussion of this verse to allow for a full treatment in this space. In a nutshell, the halachic applications are understood to cover a large spectrum of “mentions” — from swearing in the name of a false god to simply saying to a friend “hey, meet me by the idol on the corner” (Rambam, Hilchot Avodah Zarah 5:10-11), or even saying the name for no reason at all (Tur, Yoreh Deah 147).

What could be so bad about using idolatry as a landmark? Doesn’t that actually accomplish with regard to the false god what we want to avoid regarding the true G-d, showing we think it’s so mundane we can just say the name whenever we feel like it?

The Torah offers many avenues by which we demonstrate proper feeling towards and about G-d. Among them is the third of the Ten Commandments proclaimed in last week’s parsha: “לא תשא את שם ה’ אלקיך לשוא” (Lo tisa et Shem Hashem Elokekha le-shav) – which, translated literally, means something like “Do not raise up the Name of Hashem, your G-d, for nothing” (Exodus 20:7). While this commandment is generally understood as a prohibition against swearing falsely, the precise phrasing offers more insight into both the scope of the prohibition and perhaps its meaning. After all, if the only issue here were not to invoke G-d’s Name in taking a false oath, the Hebrew word, “sheker” (falsehood) could have been used instead of “shav.” In fact, there is another verse that does say exactly that (Leviticus 19:12)! The surprising word choice in Exodus indicates that this commandment is not just about lying, but about using G-d’s Name unnecessarily – even for truth.

…It is appropriate and obligatory upon us, when we mention His great name over our deeds or speech, to mention it with fear and awe, with trembling and sweat… not like those who joke and speak about a light matter…

Apparently, mention of a name can imply “raising” it up – but it depends on context, and the implications of one’s words within that context. For instance, the Tur does permit mentioning the name of an idol in order to deride it; in that context, it is clear that one does not hold the alleged god in any esteem, so there is no prohibition. (There may be relevant considerations with regard to achieving positive relationships with the practitioners of other religions – which makes this a good time to highlight that this entire discussion is specifically about idolatry, not other monotheistic faiths. It is also a good time to highlight that any practical questions should be discussed with one’s preferred halachic authority.)

There is no problem mentioning Baal or other gods named in the Torah (as I’ve done right here in this essay, as a misleading but permitted example) – perhaps because in the context of Torah study, there is no question that we are engaged in honoring G-d and not Baal, as Rambam and the Tur note.

The role of context, however, means that even the general scope I have outlined is stickier than I made it out to be — different people have different ideas about the implications of context. If I mention the name of Baal for no reason at all, does that imply more or less esteem on my part than if I mention the name only when I must? (For further analysis, see, for instance, the Ba”ch on the Tur.)

And that brings us back to the prohibition of saying G-d’s Name — for in that case, we certainly seem to allow it in a context of serious import, but not when it is about nothing at all. Saying G-d’s Name when I offer Him prayers or study His Torah demonstrates obvious esteem. Invoking it too frequently, however, makes the holy mundane.

But on the flip side — where we might think we make an idol mundane by overuse of its name, we also might inadvertently be implying that we care — that our constant referral to it is a sign of high regard, not disparagement.

It is a challenge, always, to fully consider the import of our own words, and how they might be understood by different people in different contexts.

Consider the popular phrase, “I’m not going to dignify that with a response!” When someone else says something we find entirely objectionable – do we demonstrate our disregard best by completely disregarding, even ignoring what they’ve said? Or do we worry that our silence is tacit acquiesence (shetikah ke-hoda’ah) and make a point of announcing our objections loudly and clearly? If I deign to respond, will my response successfully put the wrongheaded notion down, or simply get it more attention and inadvertently raise it up?

Maybe it depends what people will think without my help. What is the default if I remain passive? Will others see the issue as I saw it or will they be swayed by what’s out there, perhaps especially because no one has presented a different perspective? If I do respond – will others see it as the rebuttal it is, or will they be distracted by the fact that I gave it enough credence in the first place to bother responding?

Maybe it depends on the audience. Who else (besides me) has heard this terrible idea (whatever it may be; I’m being deliberately vague to allow for all sorts of scenarios) that I might speak out about, and what will they think if I don’t speak up? Or if I do?

This is the tightrope we walk. Recognizing that our words mean something, the challenge is to give them careful reflection before we speak, in order to ensure they mean what we want to say.