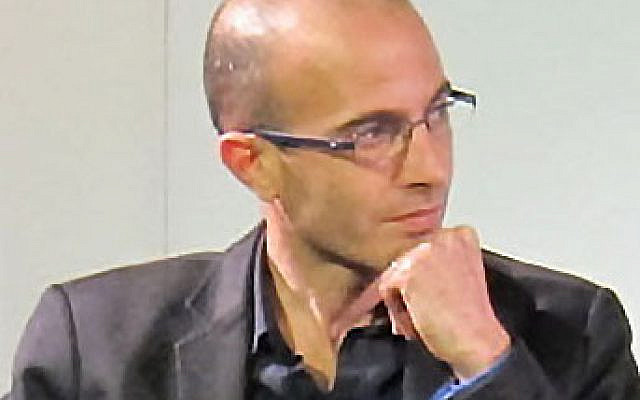 I was asked by my synagogue recently to recommend a book to members. I thought for some time of one of Lord Sacks excellent works on religion and society teeming as they do with insights and information but in the end settled for Sapiens – the first work by best-selling Israeli author Yuval Harari.

The popularity of the book has launched him on a major career, deservedly in my opinion, as a public intellectual. Not being an evolutionary biologist I am not in a position to comment on the accuracy of his theories about the emergence of our species and its development but nevertheless I find his ideas fascinating.

More than that, however, the title of the book, the very idea that someone should write a history, not of a state or of an institution, or even of an idea, but of our species itself, is deeply significant.

But what, asked my Rabbi, has any of this got to do with Judaism? I think an enormous amount. Obviously as human beings we have a natural interest in the subject but as Jews it goes much further than that. There are many points but there is one in particular that I consider most important.

It is a truism that we are all members of a single species but for all of recorded human history and almost certainly for much longer we have spent our lives in civil wars of ever increasing ferocity between ourselves.

One of the first messages of the Torah is that human beings are a part of creation and that we all are one family, being all descended from a single root. The notion, that one sector of humanity is born with superior attributes, has no support anywhere in the Torah or in the rest of the Bible.

The idea that Jews, in particular, have been chosen because of special characteristics  such as a capacity for spirituality runs directly contrary to the specific message of Deuteronomy 7:7 and of so much of the Bible. It only emerged long after the cannon of the Bible was closed, being introduced by medieval commentators.

Even then many sages like Maimonides would have no truck with it.

Nevertheless the idea has spread throughout the orthodox community particularly in groups influenced by Kabbalah.

Some time ago a university chaplain gave a lecture in our synagogue, in which his starting point was that Jews had different and superior souls to those of non-Jews. Startlingly he cited the book of Job as proof for this undoubtedly racist doctrine. In fact Job is not portrayed as being an Israelite.

His identity is given as non-Jewish but is ,in any event, irrelevant to the author – the Talmud cites an opinion that he never existed – he is just everyman. The book is concerned with universal themes of divine justice. No one in the synagogue queried the speaker’s thesis. Apart from myself no one even questioned his purloining Job.

Subsequently I argued the contrary case in a talk to a neighbouring synagogue and was accused by my host of not being mainstream. The superior spirituality of the Jewish soul was he said was an established fact.

Sometime later, the then head of, what I have to refer to as my alma mater, – a rabbinical College in Israel – issued a pamphlet setting out a more elaborate version of the same idea. Different nations have different capacities echoing, probably unconsciously, romantic idealists like Herder. I am too embarrassed to cite some of his examples.

The Jews have an enhanced capacity, he claimed, for spirituality. In support of this he cited some Russian author whose name I cannot recall who was described by another eminent author whose name also eludes me as being a greater talent than Tolstoy.

This time, there was a reaction from a couple of former pupils living in the diaspora. As a result, the venerable Rabbi withdrew his pamphlet saying that it had been misunderstood, though where his readers had got it wrong was not clear.

Tellingly he added that this problem had not arisen with his Israeli graduates – as far as he was concerned a clear demonstration of the superiority of the Israeli educational system.

When I first wrote about this just over ten years ago it was legitimate to ask whether it mattered. So some orthodox Jews and their Rabbis  have daft beliefs. Some do not believe in evolution.

Remarkably some extremely learned Rabbis, including the late Lubavitcher Rebbe believed and some of his followers still believe that the sun goes round the earth.

So some believe we have superior souls and an extra one on Shabbat , who cares?

They are fatuous but not sinister.

The answer now, however, is very different.

Racism and, let’s admit that, this is racism of the most blatant kind, is no longer acceptable.

The Board of Deputies, to general approval, has instigated an inquiry into racism in the Jewish community looking at our relationship primarily with the black community.

It is accepted that discrimination against black people and against Mizrahi Jews is wrong. It is time for the community to examine its conscience more generally.

Rabbis who preach essentialist superiority of Jews should be called out. Israeli politicians who praise mass murderers should be told not, that their words are problematic, as one senior and respected United Synagogue Rabbi recently said, but that they are abhorrent as are those who would bring them into government.

Other politicians who call for separate hospitals in Israel for Jews and Arabs and for the eviction of Arabs from the West Bank should not be honoured by the community.

The Board of Deputies report is an excellent start but it needs to be followed up. Racism should be rooted out completely and we have a long way to go.