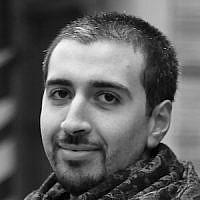 The Blogs
Andrew Pico
Apply for a Blog
Please note that the posts on The Blogs are contributed by third parties. The opinions, facts and any media content in them are presented solely by the authors, and neither The Times of Israel nor its partners assume any responsibility for them. Please contact us in case of abuse. In case of abuse,
Report this post.

There always seems to be a common thread of corrupt and ineffective leaders in democracies in every part of the world. The choices for US President last year for example were particularly abysmal, and it got me thinking – how, out of over 300 million citizens, could we be left with two such staggeringly bad options? Wasn’t there anyone better or more fitting for the job among our enormous population?

I believe there definitely was an amazing option for President, but he or she was not motivated to run for the job. There is a concept in Judaism, written in Pirkei Avot, it derives from the verse: “Love work, and hate the Rabbinut.” Hate the Rabbinut? The Rabbinut are the spiritual leaders of the Jewish people! How can you hate such important, prominent figures?! We learn that the verse is speaking to the members of the Rabbinut, not to the people about the Rabbinut. It instructs the spiritual leaders of the Jewish people to hate and to be afraid of their position of leadership, not to bask in it. Leaders have enormous, unfathomable responsibility on their shoulders. The best leaders are the leaders that despise their power; they are those who are so worried about fulfilling their responsibilities to serve their people because they actually, genuinely care about helping their people to the best of their abilities. If you were put in charge of the wellbeing of millions of people that you cared about deeply, would you be thrilled that you held that power over them or that you would have nearly limitless influence? Or would you be nearly paralyzed by the fear that you and you only have the responsibility to improve the lives of these people that you love and the repercussions of failing would cause you immeasurable pain. People who love power don’t actually care about their people – first and foremost they love the power and the influence, serving the people is secondary, probably even tertiary behind money. So it’s not that America didn’t have any great options for President, I would argue that the best options weren’t even interested in the position! Plato put it bluntly, saying, “Only those who do not seek power are qualified to hold it.” People who seek power love power, which ironically is the worst trait you can have in a leader. Those who hate the idea of having power would be demotivated to seek it, as they know the responsibilities associated with it are unfathomably high. Equally ironically, these are the people you actually want in power. These conflicting motivations are unfortunately a deadly mixture.

We learn a similar poignant concept about leadership and the dangers of craving power from the mention of the specific animals that King Solomon and Avshalom, his brother, had ridden in relation to gaining the power of King. King Solomon, when he was sent by King David to become officially anointed as the next King, was specifically asked to ride David’s female mule on the way to Gihon. Contrarily, Avshalom started a rebellion with the goal of seizing the Kingship from his father by force. Avshalom rode a male mule during the rebellion. The question we will be focusing on here is why specifically mention the gender of the mules?

To answer this question, we must first think about what a king represents. One of the oldest games invented, chess, sends a particular message about what it means to be a king. The king in chess is not strong, he is all but helpless in the moves he can make – just one space at a time. He is also practically stationary for most of the game. Despite his uselessness as an active piece, the entire success of the game depends on his ability to stay alive – the outcome of the game rests on his shoulders. The king in chess is a lazy king, and is passive in the success or failure of the game. In contrast, the queen is the most powerful piece. The queen is the most aggressive in winning the game, she is driven and motivated to succeed and save the kingdom. The queen is diligent and takes an active role in the success or failure of the game. We see here that chess takes a stereotypically negative view of leadership and those in power, that the king will lie down on his thrown and do nothing while the queen and the rest of his kingdom do everything to actually run the kingdom. Avshalom chose a male mule because he wasn’t actually interested in running the kingdom; he wanted to take the passive king’s role like it is portrayed in chess. He wanted the power and glory of the position, not its responsibilities. After all, he tried to forcefully seize power, so he clearly loved the idea of holding power. He wanted to seize power and bask in the glory and influence of the position; he wasn’t able to fully understand the gravity of the responsibility. We also see hints in the text that suggest Avshalom believed himself to be fit for the King’s role because of how handsome he was (clearly not the most humble of men out there). With behavior like that, it sure seems fitting that G-D did not choose an egotistical power-hungry man to be the successor of the throne. King David, on the contrary, saw his kingship very differently. He held a female mule because he saw his role as king as an active one, where he would constantly work towards a better kingdom for his people. King David took the queen’s active role. We see numerous examples of King David fighting in battles himself when he was not needed and was actually told to sit back. King David also did not seize power, he was chosen by G-D and the prophet Samuel to be the leader of the Jewish people. He wanted his son Solomon to see the position as king in a similar fashion, so he specifically asked him to ride his female mule on the way to becoming anointed.

The cryptic language of the Tanach and Pirkei Avot send a clear message about how we should view leadership and power – be wary of those who seek it, and make sure their intentions are pure. Those who want power are the worst people to have in power. Corrupt and careless leaders are a parasite to society and make the world a less safe place, as they don’t act in the best interests of the people but rather in the best interests of their own egos. Next time a charming, power-hungry man or woman tries to convince you to vote for them, don’t be so quick to believe them.

About the Author
Andrew Pico is from New York City, and has recently moved to Jerusalem to pursue peace building and coexistence.
Related Topics
Related Posts
Comments