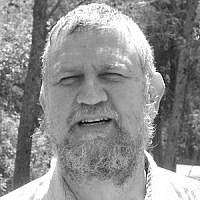 The Blogs
Catriel Lev
Apply for a Blog
Please note that the posts on The Blogs are contributed by third parties. The opinions, facts and any media content in them are presented solely by the authors, and neither The Times of Israel nor its partners assume any responsibility for them. Please contact us in case of abuse. In case of abuse,
Report this post.

As the fast, and day of mourning (and, hopefully, repentance), of the ninth of the Jewish month of Av (Tish’a B’Av) has drawn near this year (2017 – 5777), I have seen a few Posts on FaceBook, and comments elsewhere, proposing the thesis that our problems dealing with security and other arrangements on the Temple Mount, which have heightened in the past several weeks, show that the Jewish State does not yet have actual sovereignty on the Temple Mount.

After pondering this thesis, I propose a different thesis which, in my mind, better fits the situation.

First, I would relate to the Temple Mount itself. It would very likely be a mockery to rebuild our Holy Temple at this stage in our national regeneration. As a great Tzaddik (Righteous Person) told me many years ago, rebuilding the Temple now would probably produce exactly the opposite of the Temple’s purpose.

Instead of being a place which unites all Israel and brings peace to the world, a rebuilt Temple at this time would probably immediately become the focus of all that divides the nation of Israel, increasing internecine struggles and producing almost daily vehement quarrels, which would disgrace the Name of Heaven – perhaps even to an unprecedented degree!

That being the case, the great Tzaddik told me, it is beneficial to have a monotheistic religion in charge of things on the Temple Mount, as is the present situation. As to the Jews’ right to pray there as well, that has already been addressed by the late Israeli Chief Rabbi, Shlomo Goren, z”l, years ago, though the issue itself is far from being fully resolved.

Now, at present, the question is: How do we balance out these various aspects of the administration of the Temple Mount?

To my mind, the problems we have been having, both recently and in the long run, are an indication that the State of Israel DOES have sovereignty over the Temple Mount!

When you don’t have sovereignty, someone else confronts the problems and makes decisions as to how to handle them, and all that you can do is to complain (and, perhaps, demonstrate, if you are permitted to do so) if you disagree with the results.

However, when YOU have sovereignty, then YOU have to make the difficult decisions regarding the administration of the Temple Mount (and of anything else over which you have sovereignty) – you can’t pass that off to someone else, whom you can then blame without having to take responsibility for the results!

It seems to me that much of what occurs, or can occur, with regard to the Temple Mount is influenced by our enemies search for excuses to incite violence against the Jews, and that is reprehensible and should be addressed and opposed. However, until this problem is completely resolved, it is, unfortunately, part of the situation to be dealt with.

The results which will (or, will likely) occur, for whatever reason, are part of the equation with which Israel’s leadership deals in practice, and when they do so, they are exercising sovereignty. I have seen numerous analyses which claim that the Israeli government should have acted differently, and numerous ways in which it is suggested that it should have acted. Perhaps our government should have chosen one of those alternatives, but, for now, it has chosen the path it has chosen to exercise Israel’s sovereignty, and I remind us all that it has led to a new peak in the number of Jews visiting the Temple Mount on this Tish’a B’Av.

Though many issues, including the right of freedom of prayer on the Temple Mount for Jews, have not yet been fully resolved, we must also recognize the progress made so far.

About the Author
Catriel Lev, an "unconformist" halachic Jew/poet/philosopher defying standard categorization, born in Baltimore. MD (USA), living in Bet Shemesh, Israel, tries to view the issues without any “normative” biases (of any particular political/philosophical faction). His views are his own, and do not obligate anyone else, and may often be found on his personal blog.
Related Topics
Related Posts
Comments