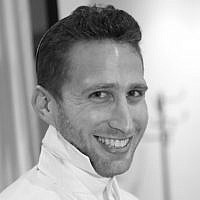 The Blogs
Aaron Goldhammer
Apply for a Blog
Please note that the posts on The Blogs are contributed by third parties. The opinions, facts and any media content in them are presented solely by the authors, and neither The Times of Israel nor its partners assume any responsibility for them. Please contact us in case of abuse. In case of abuse,
Report this post.

Last Wednesday there was an attack in a nearby Arab village which almost cost a neighbor, his wife, and kids their lives. The village is built around THE road you have to travel through in order to go to and from our village. Imagine you are driving through and an Arab ambulance drives in front of you and blocks your path. Then you are surrounded by hundreds of Arabs who begin to throw rocks at your car. The army is there but they have no orders to do anything except firing tear gas. The Arabs keep coming. They start kicking your car and breaking windows.

Your wife and kids are scared and you wonder if this is the end. You have a gun but are hesitant to use it. You worry about killing. You worry about being arrested for killing, no matter how justified you are. You know what happened when other Jews used their weapons. This resident exited his vehicle and fired a warning shot in the air. The Arabs know that Jews will have reservations about shooting because the government will likely make their lives miserable. They keep attacking.

Then he shoots 2 Arabs who were throwing rocks at his family. He kills one and wounds another (who happens to be an AP photographer). Then he gets his car and rams the ambulance until the path is clear and escapes. Fortunately my neighbor and his family aren’t physically injured. Fortunately he had the support of our village, it’s leaders, and the leader of our regional council. Fortunately he had a lawyer that worked without pay and stayed by his side the whole time at the police station. Fortunately there were tons of security cameras that recorded the whole incident. This time he survived. This time the Jew wasn’t arrested for defending himself and his family.

The same night there was a thanksgiving event at our village. We danced. We prayed. We cried. We hugged our neighbor. When you live in a village with just over 1000 people you know everyone. This shabbat I shook his hand and told him that I’m glad everything worked out.

I wonder what he is feeling inside though. I wonder what will happen if I’m in that situation. Ever since I started carrying a gun in Israel I’ve been hyper alert. Always watching and always ready but I can’t help but feel that my own government won’t support me if I have to defend myself and my family. I feel like the government will make things political. I try to fight this inside. I try to push it aside and focus on the goal. Kill or be killed and sort out the rest later. That’s what I keep telling myself over and over again.

I hope that if the time comes I won’t hesitate. I hope that I can try to move on with life the same way he seems to be. I hope that my wife and kids who experienced this with me can cope. For anyone who thinks moving to a different place is the answer I’d like to set you straight and say that it is definitely the wrong thing to do. The rules in the Middle East are simply different. I’m definitely in the right place. Itamar is my home and we aren’t going anywhere.