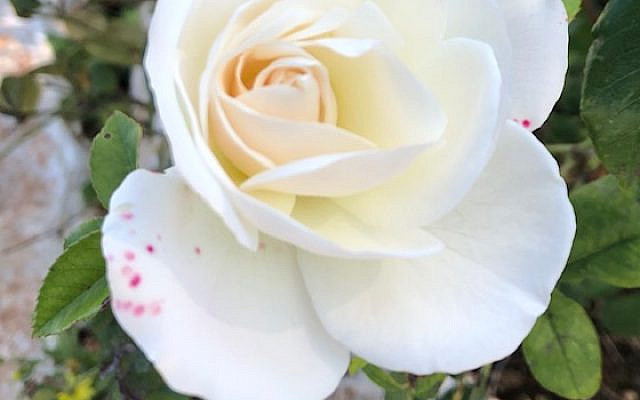 We will always remember them; photo by Shoshana Lavan

For the last 10 years, I have written and delivered the ceremony for Yom Hashoah in the school where I taught in England. My toddler and I were, along with one other family in Shropshire, the only Jews in the entire county. The assumption was I would take charge of the ceremony, yet I enjoyed creating a meaningful and memorable occasion and the feedback was always how I had succeeded in making students and teachers think about the past and the way it can help us to live a better future.

Only, something was wrong. It was as though the Shoah was mine only: my persecuted, murdered family, my Jewish people, my “strange” history.

Nobody knew how ostracised I felt.

This year, for the first time, my history was no longer strange. I was with my Israeli family. That’s how I felt when, during the ceremony, the teachers and the students were invited to light a candle in the memory of family we lost in the Holocaust. It was so tragic, moving and empowering to watch and see how many candles were lit by so many of us. The flickering flames shone brightly and spoke in unison: we are still alive, despite all odds.

Suddenly I am not the only Jew in the room, and it isn’t only my story. It is ours.

This week, I walked to my parked car outside school to discover a puncture – one I only saw due to the thoughtfulness of a colleague and friend who had seen it, photographed it and posted it on the teachers’ WhatsApp group. Three people helped me to change the wheel – two teachers and a student – which they did very quickly, without fuss and full of kindness. One of them even drove back to school to help when he heard I was in trouble.

I drove home very slowly and carefully on the spare wheel, and all kinds of vehicles came up fast behind me, beeping in the slow lane, not realising I had a valid reason for travelling so slowly.

They didn’t stop to consider why.

This week, I have seen some of my friends break down into tears because of troubles they’ve been struggling with: troubles they told nobody until now. Why did they keep silent?

During the ceremony I realised something – something I do think about but often forget to think about: how easy it is for humans to look at each other without seeing each other.

Before the ceremony, I was talking with my ninth Graders. I introduced them to Etty Hillesum*, and her ideology: “I believe that I will never be able to hate any human being for his so-called ‘wickedness,’ that I shall only hate the evil that is within me, though hate is perhaps putting it too strongly even then. In any case, we cannot be lax enough in what we demand of others and strict enough in what we demand of ourselves.”

And I stressed to them: For evil to happen, good people only have to stand by and do nothing.

If we put those two ideas together, we get something very beautiful. I should not judge others; I can only judge myself. I should not hate others; I should only ensure I am always actively trying to make the world a better place.

There has been and is so much pain in the world – one way we can fight back is to understand that we don’t know each other fully, and never can.

But we can try.

*Esther (Etty) Hillesum (15 January 1914 – 30 November 1943) was the Dutch author of diaries and letters which explore her ideologies and the persecution of Jewish people in Amsterdam during the German occupation. She was murdered in Auschwitz concentration camp in 1943, at the age of 29.