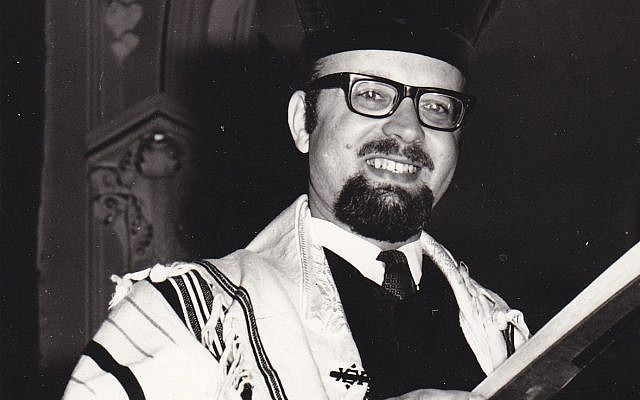 Rabbi Apple in his younger years at the pulpit of the Great Synagogue, Sydney. (Source: R Apple)

Modern rabbis live in two cultures at once and bridge them by means of sermons, in my case thousands of them.

Yet long experience in the pulpit never cured my nervousness. I was (and am) daunted by the task.

The sages speak about eimata d’tzibbura, fear of the congregation – not fear that they will sack you, though that does play a role, but fear that the sermon will go over their heads, insult their intelligence or make no impact.

The preacher knows other kinds of fear too – fear of the Torah or God Himself being dissatisfied with his efforts, fear of his teachers feeling let down by their pupil, fear of his own conscience saying, “You didn’t do your best today!”

The role of the rabbi is to say what has to be said.

Sometimes it is a day of joy or sadness, when the rabbi is a poet who puts into words what everyone is feeling. Sometimes it is a challenging occasion, when something has shaken a community or nation, and people need guidance as to how to respond. Occasionally it advocates a change in communal policies or programs. Usually it is a regular Shabbat or festival when the rabbi can enrich the day with an exposition or explanation.

Unfortunately some preachers use the pulpit for personal attacks – on other synagogues, even on other rabbis. One rabbi I knew had an endearing Scottish accent and often used his sermons to attack the vorreld (the world). Everybody loved him, but the vorreld took no notice of his views.

My preaching was moulded by the Soloveitchik test, the Kahana test, the Lehrman test.

There was once a regular feature in a Sydney morning paper summarizing one of that week’s sermons and when they reported my Yom HaAtzma’ut sermon they couldn’t believe that it covered so much ground and took no more than eight minutes!

In Australia one of my great presidents was Sidney Sinclair, who often got on the phone straight after Yom Kippur and said, “You were stupendous!” The compliment was not always deserved but it was a great encouragement.

Every now and then a world figure was in the congregation and said I had done well: an example was Professor Emil Fackenheim who heard a sermon I gave based on the beginning of Gemara Ta’anit. An Israeli politician heard me speak about Rav Soloveitchik’s concept of Adam I and Adam II and told me it was a good mussar shmuess.

The comments were occasionally cruel and unfair. Generally they were helpful: after a sermon on why the alphabetical acrostic of Ashrei left out the letter Nun a visitor said, ”Instead of speaking about what isn’t there, you should talk about what is!” Actually my general rule was to be positive and to use the pulpit for educational purposes.

There were embarrassing moments such as my first sermon ever, given in Hobart, Tasmania. People got up and sat down whilst I was speaking and it flustered me. Later I learnt that the seats were so hard that no-one could sit still for long. In my childhood I was at another rabbi’s sermon when the choirmaster leant back in the choir gallery above and his kippah fell off and landed on the rabbi’s head.

Sermons have a long history in Judaism, beginning with Moses’ exhortations and the rhetoric of the Biblical prophets and, later, the vast range of interpretive Midrashim. The preaching tradition, analyzed in the 19th century by Leopold Zunz, was a seminal segment of Judaism.

With the Emancipation, preaching underwent a revolutionary change. Talmudic derashot which bore little relation to the events of the environment were challenged by the new age of Wissenschaft, bringing sermons in the vernacular which addressed contemporary issues in the idiom of the time. However, despite the efforts of Samson Raphael Hirsch, Nathan Marcus Adler and other neo-orthodox rabbis, the ultra-traditionalists bitterly opposed the innovation.

English-language synagogal preaching was pioneered in Britain at a period when Christian pulpit oratory was strong and popular. There was widespread Jewish agitation for “lecturers”, and the Jewish sermon developed a standard form and structure.

Today there has been something of a reversal, and the sermon is more likely to be a Devar Torah than a homiletical essay. It enhances people’s knowledge but does not always challenge them.

John Wesley is said to have given over 40,000 sermons and his Methodist preaching tradition has had its lean times when old slogans and clichés made the pulpit dreary. It is a warning to Jewish preachers who need to remember the saying that “there is no Bet Midrash without a chiddush (something new).” Sermons are generally a poor method of communication, with preachers talking at and not with their congregations.

For my part, I give few sermons these days and have to cope with the sermons I hear from others. I regret to say I doze through most of them.