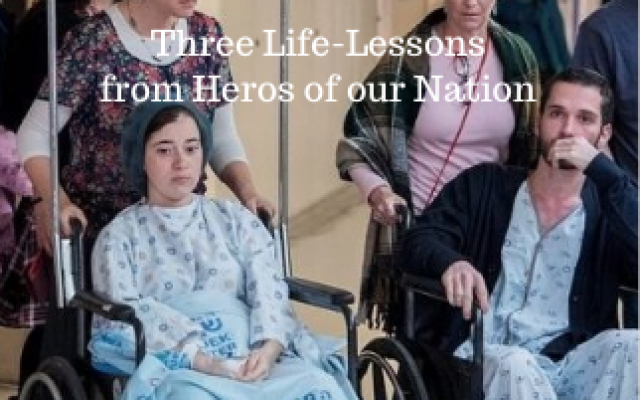 Yesterday, I had the great honor of visiting Shira and Amichai Ish-Ran at the Sha’arei Tzedek Hospital in Jerusalem, Israel.

Shira Ish-Ran, 21, was wounded last week, when evil terrorists opened fire on a bus stop, north of Jerusalem in a drive-by shooting attack.

Amichai, Shira’s husband, was also wounded in the attack after he shielded her with his body as the terrorists continued to fire at the bus stop.

Shira, who was 30 weeks pregnant at the time, was evacuated to the hospital in critical condition, where doctors were forced to perform an emergency c-section to deliver her son, Amiad Yisrael. While Shira’s condition stabilized and improved over the next few days, her son remained in critical condition, and later died.

Yet, I thought that I had come to visit and strengthen Shira and Amichai and their families; instead, I was strengthened. And as much as I attempted to inspire; I was inspired multifold.

But more than their unshakable faith and their unbreakable spirit, it was their words of wisdom that inspired me deeply. And they taught me countless life-lessons that will stay with me forever. Here are just three of them:

1. Making the important – important, and the trivial – trivial
Amichai’s parents shared that they have another son who is getting married in just two weeks.

A few days ago, in the midst of their unimaginable pain, they were asked to choose the types of plates and decoration they wanted for their son’s wedding.

Amichai’s father, Refael, instructed them to “pick whatever they wanted,” not because he didn’t have the focus and energy to make these decisions. Rather, it was because this evil attack on the lives of his son and his daughter-in-law taught him that “life is not about the type of plate you have at your wedding; it is about the love and the passion you have for your spouse, for your family, for your values, and for your life-purpose. Everything else is so unimportant…”

2. We Are One
“My daughter lost a great deal of blood in the terror attack, and she needed 50 blood transfusions,” Shira’s mother revealed to us. “But she now feels like the blood of the entire Jewish people is flowing through her, and so the Jewish people have strengthened her every step, not just spiritually and emotionally, but also, physically.”

Shira’s mother continued to share her amazement at the tens of thousands of people who had come to visit and send their good wishes. Most of them, she mentioned, did not even know Shira and Amichai. Yet, they came, out of a deep sense of responsibility and unity.

This selfless kindness by these ‘anonymous’ Jews, reminded me of the holy words of the Tanya that states that the deeper we go into ourselves, the more we will discover our oneness. The more we reveal our individual soul, the more we will find the collective soul of our Jewish people, where we are all one, like the limbs of a body, or as instruments in a symphony.

Indeed, we are one. And may we act as one people, always, with loving eyes, a caring heart, and a helping hand, today, tomorrow, and forever.

3. “In the end, it’s not the years in your life that count; it’s the life in your years.”
With tears in his eyes, Amichai and his parents mentioned that his son, Amiad Yisrael Ish-Ran, who passed away just three days after his birth, as aforementioned, had brought Jews across the world together in prayer, despite the briefness of his life.

“Our baby managed to do in the three short days that he was alive more than what the rest of us manage to do during our entire lives of many years. He simply brought us all together. Everyone felt connected.”

How true. Every moment counts. Even just three days of our lives can impact myriads of people globally.

Indeed, every day, we have the chance to make a positive impact on people’s life. At any given the moment, we are presented with opportunities to serve, to comfort, to listen, to smile, and to heal.

Let us heed the call that emanates from these wise words of Shira and Amichai and their parents, and let us make a difference in our world, today.

For “in the end,” as Abraham Lincoln once said, “it’s not the years in your life that count; it’s the life in your years.”