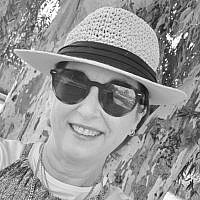 The Blogs
Nili Laiman
Apply for a Blog
Advertisement
Please note that the posts on The Blogs are contributed by third parties. The opinions, facts and any media content in them are presented solely by the authors, and neither The Times of Israel nor its partners assume any responsibility for them. Please contact us in case of abuse. In case of abuse,
Report this post. 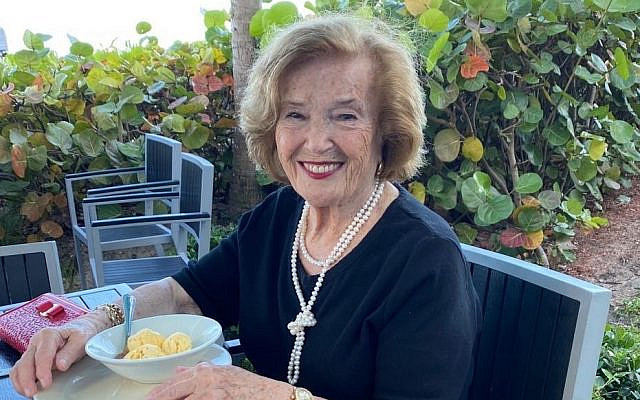 I want to tell you a story. A story about my mother, Ryvka Laiman. It moves from Kazakhstan through Toronto and on to Israel. It is a story of a shared ancient craft.

Three women from different parts of the world picked up a spindle to spin wool. Each woman had her own reasons to spin. The oldest woman, my mother, Ryvka Laiman, spun out of necessity as she contributed to the well-being of her family. I, her daughter, Nili Laiman was born in a period of relative peace and abundance. Unlike my mother, my spinning is for personal pleasure and it gives me joy. Yonit Krystal – a master spinner – spins for her livelihood. She teaches spinning and basket weaving throughout Israel and is uniquely recognized in preserving ancient skills.

Both my maternal grandmother and mother were avid knitters and, at 9, I was taught to knit by my mother. Ima showed me how to cast on, purl, decrease and increase stitches and I haven’t stopped knitting for close to 60 years. I prefer to knit with large sized needles and bulky wools so that the piece grows quickly. I once knit a sweater made from spools of red ribbon that I had found in a coat factory. And of course, my mother with her unique talents designed the pattern for me. As it happened, I showcased it as a contestant on a game show hosted by Monty Hall. Monty and I later talked about the origin and beauty of the sweater. I somehow impressed him. It seemed rather funny at the time.

Growing up, my mother always talked about her experiences in the war where she spent six long years in Siberia and Kazakhstan. Today, Ima is an accomplished painter who as a young girl used her hair as a paint brush, painting pictures of flowers and trees on frosted windows. My favorite story is how she taught herself how to spin wool from the Kazakh tribeswomen and then knit sweaters for herself, family members and friends.

My mother didn’t pass down her spinning skills to me, but somehow, I found myself falling in love with all things fiber taking classes on how to spin yarn and weave fabric. In 2008, I attended my first basic spinning course in Toronto using a drop spindle. I was excited to learn the craft, but I just couldn’t master this unusual skill as the movement was too awkward for me. About 5 years later, I made aliyah to Yavne’el, a farming town in Northern Israel. My yearning to spin returned so I joined a one-day spinning workshop at my neighbor Yonit Krystal’s studio. Admittedly, I struggled again. I couldn’t grasp the fine balance and rhythm between my fingers drafting the wool and my leg using the single peddled spinning wheel. However, after trying a two-peddled wheel something clicked, and I started to spin. I was immediately hooked.

As I’ve already mentioned, my mother, young Ryvka Nadler, learned the ancient skill of spinning yarn from the Kazakh tribeswomen during World War II. Ima found herself torn from her birthplace and exiled to Siberia with her parents, three brothers, two uncles, an aunt, and her grandmother.

A few years after the spinning workshop in Yavne’el I visited with Yonit again. As a fiber artist and basket weaver her incredible works are exhibited in art galleries and museums throughout Israel. I went to buy one her gorgeous handmade baskets and while chatting I mentioned my mother’s experience spinning in Kazakhstan. It was at that point that I discovered that Yonit has an unusual preoccupation. She is passionate about seeking out craftspeople throughout the world who have expertise in ancient techniques. Yonit describes her encounters with these exceptional people by retelling their stories and sharing their knowledge on her blog. She was intrigued by my mother’s story and asked to interview her.

I have added a few extra details to make the story clearer.

I didn’t actually know it would be a story about escape. Nili Laiman is my neighbour in Yavne’el, and a few years ago she attended a one-day spinning wheel workshop. There are those for whom this one-day experience is enough to get them addicted. Nili is one of those. She bought a spinning wheel, and she is spinning. A few weeks ago, she came to me and bought one of my handmade baskets for her skeins of wool and while talking she mentioned her mother, who was a spinner as a child in Kazakhstan. I wanted to hear all about it. Nili thought it would make her mother very happy if I heard the story directly from her. Today she managed to arrange a video call for me with her 89-year-old mother who lives in Toronto. Her name is Rebecca Laiman, and here’s her story, as I could understand it.

Rebecca Laiman was born in Józefów, Poland which is about 400 km from Lvov. When the Nazis invaded Poland, the family escaped by fleeing to Lvov where they found refuge with extended family. They fled their hometown with little more that the clothes on their back never imagining the frigid temperatures they would have to endure. Lvov happened to be occupied by the Russian Army for a few short weeks during the beginning of the war. The Russian occupiers offered Russian citizenship to these escapees and those who refused this offer were exiled to prisoner of war camps throughout Siberia. My mother’s family refused to accept the offer of citizenship. Sadly, many of the others who became Russian citizens and remained in Poland perished horrifically in concentration camps.

Living in Siberia for about a year Rebecca lived in cold and stark conditions.  She lost a baby brother to diphtheria and friends to starvation. For reasons that were not clear to Rebecca, the family was evacuated to Kazakhstan. After a grueling 4-week train ride, to their shock they found themselves living in a kolkhoz, a small collective farming village. They were assigned shelter in a cold and drafty clay house barely heated by a central clay furnace and sleeping on thin mattresses mostly filled with straw. Rebecca, 8 or 9 years old at the time took care of her two younger brothers and searched the forest for turtles to make soup to prevent them from starving. It was a secluded place and in the winter it was cold – but only slightly warmer than Siberia.

The Kazakhs had many herds of sheep and camels. As a curious and handy child, Rebecca observed the Kazakh women and started collecting remnants of sheep’s wool and camel’s hair. She cleaned the wool and fluffed it open readying the wool for spinning. Her friend, Aryeh, who never left her side made her a drop spindle. He devised a piece of rubber from a torn tire for the whorl and using a reed of thick grass for the rod.

She learned to speak Kazakh, and from watching the tribeswomen, incredibly she taught herself to spin wool and to weave. What she remembers about the spindle is that the rod had grooves along its entire length so that the woven wool thread runs through them preventing the yarn from tangling. I was fascinated as I had never heard of this type of spindle. Rebecca wove a lot! Every day after school – that’s what she did. Her grandmother taught her how to knit and from the wool she spun she knit herself a skirt and a sweater. For her father she knit a sweater from camel hair to protect him from the extreme cold. He had been drafted into the Polish Army and was not home for months at a time. She once found an old mattress and when she opened it, she discovered that it full of cotton and decided to spin the cotton and knit herself a summer skirt. Her mother even managed to get her some dye in the big city near their home. She happily remembers dying her skirt blue.  That’s the story. It belongs to a different generation.  And it seems to me that I will tell this story next time I conduct a spinning workshop. And the participants will think that weaving 200 grams of yarn is a lot of work, but that’s exactly what little Rebecca did as she spun even more yarn than that to survive!

I’ve heard my mother’s story many times as she has spoken at Holocaust Memorial events and had her testimony recorded by the Steven Spielberg Foundation. I was particularly moved by this interview. Yonit beautifully drew out more details of my mother’s life as a child, a refugee and a survivor in Kazakhstan.

My mother no longer knits.  However, she does paint and especially enjoys painting with her grandchildren and great grandchildren. She is also a member of the Israeli Artist Group exhibiting her pieces at shows throughout Toronto. Yonit is no longer just my neighbor and teacher – she has become a good friend. While continuing to nurture my skills in spinning yarn and weaving fabrics I count myself blessed to have been influenced and taught by these very special talented women. I’m eagerly waiting for the right time to pass on my love of knitting and spinning to my own grandchildren.

About the Author
Nili moved to Israel from Canada over ten years ago. She lives in Yavne’el, an agricultural village in the lower Galil. Nili graduated from the Institute of Integrative Nutrition as a Certified Holistic Health Coach. She uses her nutritional knowledge and love of food to develop plant-based recipes and teach others about the importance of a plant based whole foods lifestyle. She ferments, sprouts and bakes sourdough breads. She also a weaver creating one-of-a-kind pieces such as scarves, shawls and table runners. She loves telling stories.
Related Topics
Related Posts
Comments