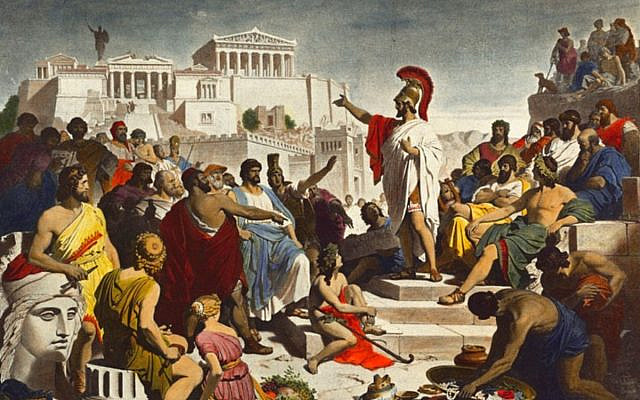 The “History the Peloponnesian War” is a historical account of the Peloponnesian War (431–404 BC), which was fought between the Peloponnesian League (led by Sparta) and the Delian League (led by Athens). It was written by Thucydides, an Athenian historian. His account of the conflict is widely considered to be a classic and regarded as one of the earliest scholarly works of history. The History is divided into eight books. Woodrow Wilson read the History on his voyage across the Atlantic to the Versailles Peace Conference, which decided to create the League of Nations in 1919. In its Book V, Thucydides advances the existence of a binding peace treaty signed by different Greek cities, when he says that:

“The Athenians, Argives, Mantineans, and Eleans, acting for themselves and the allies in their respective empires, made a treaty for a hundred years…..The articles of the (peace) treaty, the oaths, and the alliance shall be inscribed on a stone pillar by the Athenians in the citadel, by the Argives in the marketplace, in the temple of Apollo: by the Mantineans in the temple of Zeus, in the market-place: and a brazen pillar shall be erected jointly by them at the Olympic games now at hand. Should the above cities see good to make any addition in these articles, whatever all the above cities shall agree upon, after consulting together, shall be binding.

This treaty absolutely banned the recourse of war to settle disputes among empires, the principle of non-intervention in the internal affairs and the prohibition of the use and threat of force. These principles were enshrined some centuries later in the Charter of the United Nations in 1945. Thucydides expressed these ideas as follows:

This peace treaty or alliance, which was inscribed on a stone pillar, was sworn by the Athenians and their allies, by the Argives, Mantineans, Eleans. Each state individually swore the oath most binding in his country over full-grown victims: the oath being as follows: “I stand by the alliance and its articles, justly, innocently, and sincerely, and I will not transgress the same in any way or means whatsoever”

Experts conclude that the long years of warfare had weakened the entire fabric of Greek civilization. The economic costs of the war were incalculable. Most of the principal Greek states suffered serious population declines as well, either directly from war losses or indirectly from the hardships caused by the war. Instead of peace and freedom, the destruction of the Athenian empire brought Greece as a civilization only continued strife and eventual conquest by Macedon. Greece thus paid a very high price for Athens’ and Sparta’s strategic shortsightedness at the beginning of the war.