The Blogs
Michael Kagan
Apply for a Blog
Please note that the posts on The Blogs are contributed by third parties. The opinions, facts and any media content in them are presented solely by the authors, and neither The Times of Israel nor its partners assume any responsibility for them. Please contact us in case of abuse. In case of abuse,
Report this post. 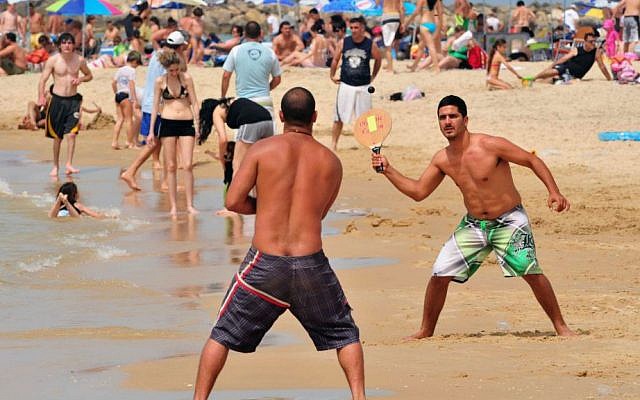 Thwack! Ever played matkot (paddle ball) on the beaches of Israel? Or more often than not, found yourself trapped in the danger zone between two hard-hitting players while trying to take a stroll along the shoreline? This game is considered to be the only original contribution Israel has made to the world of sports. No one knows who invented it or who named it but I consider it to be one of the highest, most sublime games ever. 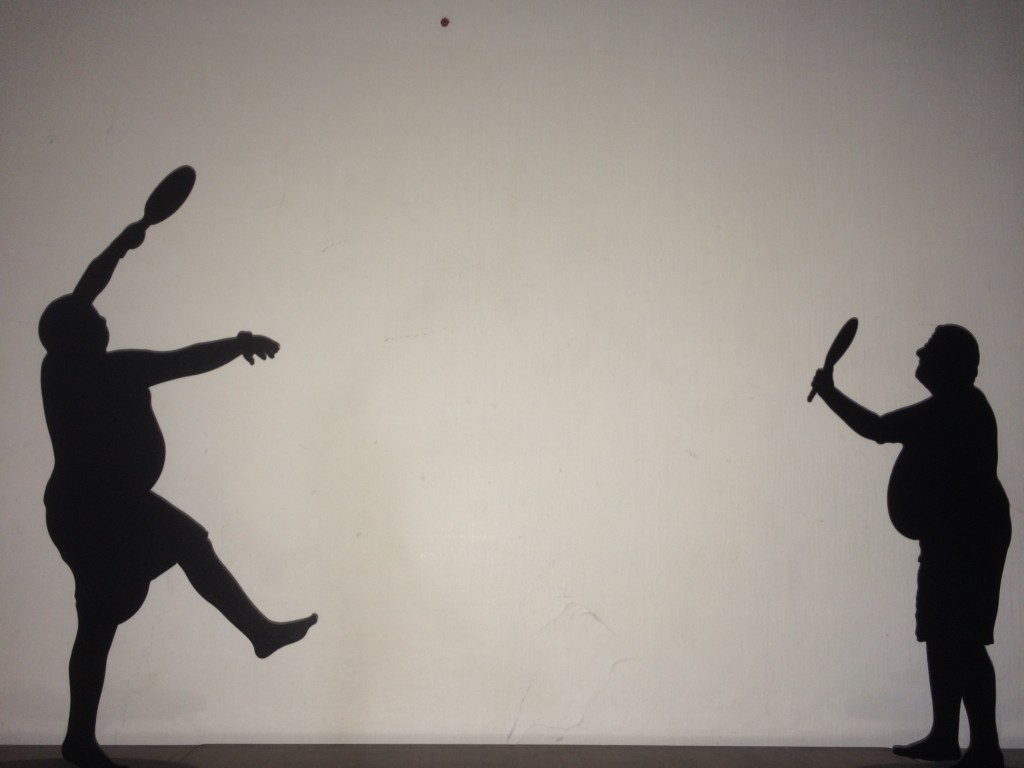 Really??!! Two bronzed, sun-worshippers smashing a small rubber ball, thwack!, with a wooden racquet back and forth, back and forth with all their strength while ruining the peace and quiet of a beautiful beach, and a breathtaking sunset — that’s sublime? I’ll go further and state that this game is not only an original Israeli invention, it is quintessentially Jewish.

The origins of the game are lost in the dim mists of the past. At the matkot museum in Tel Aviv there is proof that the game was in existence at least as far back as the 1920s as evidenced by a painting of a Tel Avivian beach scene by Nahum Gutman. On a humorous side, an archeologist claimed that he had found remains of a wooden paddle resembling a matkot raquet in an archeological site in Ashkelon dating back to the ancient Philistines. Recently, aficionados of the game have applied for Olympic Games’ status.

When I was a teenager, I would come every summer to Israel to visit my father’s surviving family. One of his cousins lived on Kibbutz Kinneret and I would stay with him and his family. In return, I would work in the orchards or the factories, one of which manufactured Matkot sets — two wooden racquets with a small rubber ball wrapped in a plastic net bag. Cutting the wooden folios, compressing them into a book, adding the plastic handle. But, as much as I enjoyed playing it wasn’t a game for me. I was raised on the competitive courts of tennis, squash and ping-pong, where it’s “kill or be killed.” I was trained to win; to see the person on the other side of the net as the enemy to beat, to smash, to triumph over.

But matkot is different. It’s unlike any other comparable sport because it’s either a win-win, or a lose-lose game. Imagine playing and hitting the ball in such a way that it is impossible for your partner to return it. What has been achieved? Nothing. The only way to play is to hit the ball in such a way that your partner can hit it back (note the use of the term partner and not opponent). But the goal is not to hit it gently just to keep it in play. The goal is to test and be tested; to push and be pushed; to challenge your partner and to be challenged in return; to grow and to help grow, to build and be built. There are no points awarded; the game is played for the sake of playing the game.

To what can this be compared? To learning with a hevruta in Traditional Jewish Learning (TJL) over a sacred text.  A hevruta is more than just a study partner; it is a person that you spar with with all your intellectual might; a partner that will challenge your thinking and logic; a partner that will not let you get away with your usual BS. It is this pressure that pushes for alertness, focus, creative and original thinking. And there are no winners or losers, and no points awarded: learning is for the sake of learning, for “the sake of Heaven”.

In the Talmud there is the famous hevruta between Rabbi Yohanan and Resh Lakish (R. Shimon b. Lakish) of which it is said: “When they discussed halakhic questions it was as if they were uprooting mountains and rubbing them together,” (Sanh. 24a).

When Resh Lakish died, R. Yohanan was plunged into deep grief. Said the Rabbis, ‘Who shall go to ease his mind? Let R. Eleazar b. Pedath, whose knowledge of the oral tradition is very acute, go to him.’ So he went and sat before him; and on every dictum uttered by R. Yohanan, R. Eleazar observed: ‘There is a Baraitha (tradition) which supports you.’ ‘You are not as the son of Lakisha (Resh Lakish).’ he complained: ‘when I stated a law, the son of Lakisha used to raise twenty-four objections, to which I gave twenty-four answers, which consequently led to a fuller comprehension of the law; whilst you say, “A Baraitha has been taught which supports you.” Do I not know myself that my dicta are right?’ Thus he went on rending his garments and weeping, ‘Where are you, O son of Lakisha? Where are you, O son of Lakisha?’ and he cried thus until he lost his mind. Thereupon the Rabbis prayed for him, and he died. (Baba Mezia 84a)

To make the story even more complicated, Resh Lakish died because R. Yohanan insulted him. This is the shadow-side of the hevruta experience. But that’s another story.

Matkot is quintessentially Israeli. I cannot prove a direct evolution from the halls of the great yeshivot of Eastern Europe to the beaches of Tel Aviv but I do know that what hevruta does for the mind, matkot does for the body, which was a very Zionist transformation in those early years of the Yishuv (resettling of the Land of Israel).

Fortunately or unfortunately, matkot is confined to the beaches of Israel, that little strip of land between East and West. It is rumored that the thwacking of the little rubber ball can also be heard on other shores where Israelis gather in large numbers during the migration seasons. But it hasn’t caught on elsewhere like beach volleyball or Frisbee. Nor has hevruta study. Why hasn’t this tried and tested method of mental sharpening spread beyond the walls of the yeshivah, beyond the pages of the Talmud and our other sacred texts? Why aren’t the libraries of the world’s leading universities resounding with the thwack, thwack of hevrutot (pl. hevruta) battling out dialectic combat in philosophy, literature, theoretical chemistry? Why the loneliness? Why the silence? Is this attributable to the monastic tradition in Christianity where their sacred texts were studied and copied? Shhh! Be silent! Or to the fact that the Western educational system is built on the philosophical underpinnings of Platonic wisdom, Aristotelian truth and Hegelian synthesis whereas Hevruta is based on infinite questioning and paradox?

There is a great YouTube clip showing the looks of amazement when a South Korean filmcrew enter the great Ponevezh Yeshiva in Bnai Brak. Row after row of men learning in hevruta, some pounding the tables, some yelling, some imploring, some just sharing, but all done with a high sense of respect for the sanctity of the text and of the study partner. In South Korea, learning Talmud is now part of the curriculum in some schools.

This method of learning — what I call Traditional Jewish Learning (TJL) — has had a huge but unrecognized influence on Jewish culture in general and Israeli culture in particular. It is, I believe, these echoes that the Start-up Nation is resonating to and which can now be heard thwacking around the globe.

About the Author
Michael Kagan is the author of the Holistic Haggadah (Urim), God’s Prayer (Albion-Andalus) and The King’s Messenger (Albion-Andalus Books). He is a scientist, entrepreneur, film-maker and teacher of Holistic Judaism. He lives in Jerusalem with his wife, Rabbi Ruth Gan Kagan.
Related Topics
Related Posts
Comments