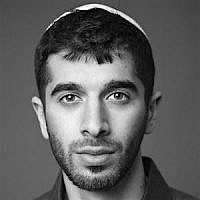 The Blogs
Leibel Mangel
Apply for a Blog
Advertisement
Please note that the posts on The Blogs are contributed by third parties. The opinions, facts and any media content in them are presented solely by the authors, and neither The Times of Israel nor its partners assume any responsibility for them. Please contact us in case of abuse. In case of abuse,
Report this post.

I am so tired of seeing Jews invoke “tikkun olam” and Jewish values as a reason to vilify Israel and the IDF. “Tikkun olam” does not mean we must be slaughtered in order not to harm others. In fact, “tikkun olam” has nothing to do with what the world calls “social justice”. The second half of the phrase is conveniently left out: “b’malchus Sha-dai — under the kingdom of G-d “. Repair the world in a GODLY way. There is no Jewish value that says we cannot defend ourselves. In fact, what is a Jewish value: Habah l’hargecha hashkem l’hargo — “If someone is coming to kill you, rise against him and kill him FIRST.” Not because we want to kill or we celebrate death, but because we hold such immense value of life. Without this value, we actually diminish the meaning of life.

Yes, we all should feel sympathy and empathy for the innocent Palestinian who are being exploited by the their leaders, but not at the expense of Jewish lives. Sympathy and empathy alone do not change reality. If you truly care about their lives, you must do all you can to hold accountable those who enable and promote such evil. Hamas, the Palestinian Authority, the main stream media, and many governments around the world. This is the only way for a better future.

Today my thoughts are also with my brothers in the IDF who are deployed at the Gaza border. Having looked down the barrel of my rifle, and seen children standing alongside terrorists – I can appreciate the impossible situation they are facing. They serve with honor, dignity, and respect – doing everything humanly possible to protect the innocent. We don’t take your sacrifice for granted.

We are all created in the image of G-d, thus our lives hold tremendous value and purpose. Hopefully one day in the near future, ALL will recognize that fact thus leading to a world of peace and harmony. Until then, it is our duty – our Jewish duty – to defend against all those who seek to destroy us, and by any means necessary.

About the Author
At the age of nineteen, Leibel Mangel left his home and family in Cincinnati, Ohio to enlist in the Israel Defense Forces as a lone soldier. As the son of a Rabbi and the grandson of one of the youngest survivors of Auschwitz - serving in the IDF was not a matter of if, but rather when. Leibel served as a machine gunner in the Kfir Brigade, where he took part in numerous high profile anti-terror operations including the tragic discovery of the bodies of Gil-Ad Shaer, Naftali Fraenkel, and Eyal Yifrah who were kidnapped from Gush Etzion in 2014. Leibel has used his story and experiences to continue his service by fighting for Israel in both mainstream and social media and in cities throughout the country. Leibel is also the recipient of a 2017 Jewish People's Choice Award and 2019 Hometown Hero Award.
Related Topics
Related Posts
Comments