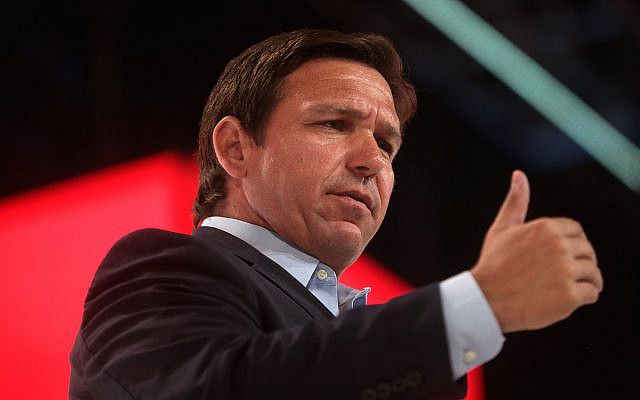 The Tikvah Fund recently sent me information about the way Jewish texts influenced the founding of America. As it said, one needs to look no further than the Torah inscription “Proclaim Liberty throughout the land and to the Inhabitants thereof” on the Liberty Bell. It features essays by a variety of thinkers, not just the more traditional R. Meir Soloveitchik but also such comparative free thinkers as R. Micah Goodman. It was responsible for founding and nurturing the now independent Jewish Review of Books, a truly wonderful publication whose quarterly issues I read avidly.

Yet this presumed bastion of Jewish intellectualism recently stumbled badly when it invited right-wing, Trumpist style Governor Ron DeSantis not only to speak at its annual conference but to do so at the Museum of Jewish Heritage in New York. This museum devotes itself in large part to Holocaust remembrance and the history of antisemitism. It is the wrong place for a speech by an acidicly divisive politician.

Tikvah’s justification for hauling in a right-wing politician with no intellectual credentials at all, conservative or otherwise, was so ludicrous as to be laughable. It pointed to recent stories about the success of Miami’s Jewish community as the reason for inviting in the Governor of Florida. But anyone with the slightest experience in state and local government knows that governors do not run cities; mayors and city councils do. If you want to know why a city is thriving, ask its mayor, especially in cases where the mayor and governor are not in the same political party. And even more especially where the issue, like a local influx of Jews, is one that state officials, such as DeSantis, do not address.

But the lack of connection between DeSantis and the success of Miami’s Jewish communities underlies only one layer of obfuscation. Second, his policies: limiting gun control, fighting vaccine mandates, opposing abortion – these are not ones that Jews in general support. So, while he has done nothing to enhance Jewish life, he has, at best, contributed to divisiveness in the Jewish community through his stringently restrictive policies. He divides, not strengthens, Yiddishkeit.

Yet the most misleading claim of all remains Tikvah’s headline-grabbing assertion through its executive director, Eric Cohen, and Tikvah’s Chair, Elliot Abrams, that the decision by the Museum of Jewish Heritage that DeSantis should not speak there represents wokeness gone rampant and censorship. The reality is quite different.

DeSantis is a yet undeclared but obvious aspirant for the 2024 Republican Presidential nomination. Tikvah well knew that the image of him speaking at the Museum of Jewish Heritage devoted to Holocaust remembrance would undoubtedly boost his hopes. It would coincidentally [?] advance the political agenda of the Republican Jewish Coalition, which seems to express little concern about the former president’s antics. After this obvious political agenda was foiled when the museum refused to play political patsy, the Tikvah spokespersons started bleating about censorship and wokeness.

This complaint was particularly ironic, for DeSantis represents the worst impulses of political correctness and right-wing wokeness. When Disney dared to question his initiative about teaching schoolchildren gender issues, he retaliated by obtaining a revocation of Disney’s half-century-old special taxing district. He threatened the Special Olympics with over $20 million in fines to get them to withdraw their vaccine mandate for special athletes. As the parent of a son with autism who used to compete in Special Olympics, I find his hard-hearted imposition of political correctness on this organization appalling. My son would not have needed to add the risk of COVID-19 to his autism.

Plus, DeSantis just signed a new law that bars teaching subjects that might hurt people’s feelings. This law might well bar accurate teaching about slavery and ban businesses from conducting diversity, equity, and inclusion training. In other words, this supposed opponent of wokeness has outlawed speech with which he disagrees. Disgraceful and authoritarian behavior.

The conference with DeSantis in tow did take place last month at another location. It billed itself as the Jewish Leadership Conference, a misnomer, as the list of speakers generally included only a small conservative segment of Jewish leadership together with some Trump Administration officials. Clearly, woke right-wing leadership is not leadership for Jews as a whole, but another sorry partisan whoop-de-doo. Altogether a conspicuous effort to draw lines dividing the Jewish people.

A concluding question: How can the Tikvah Fund, an organization with genuine intellectual credentials, stoop so low? Will partisan spirit, love of combat, and dalliance with right-wing sloganeering negate the intellectual influence Tikvah might legitimately assert? Unfortunately, the answer appears to be Yes.

About the Author
Peter Buchsbaum is a graduate of Cornell University and Harvard Law School. He clerked for Joseph Weintraub, Chief Justice of NJ and served as a Judge of the NJ Superior Court from 2004 to 2013 after a career as prominent municipal land use lawyer. Peter has been listed in Who's Who in America for over 25 years. Today, he sits on the WUPJ North American Advisory Board and Co-chairs its Legacy Committee Chairs. He has been an officer of Har Sinai Temple in Pennington, NJ; and he is a co-founder of J-PLAN (the Jewish Pluralism Legal Action Network), which advocates for marriage equality in Israel.
Related Topics
Related Posts