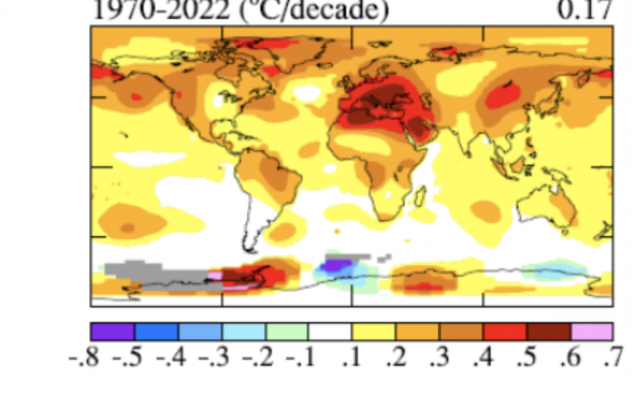 Our weather is going to get very hot, and the hot weather is going to last into the end of next week (the last week of August). As depicted in the map, temperatures have warmed worldwide since 1970. The skeptic will say that the period of time represented by the 1970s was a relatively cold period in world temperatures, so that we’re simply just on the other side of cold (meaning temporarily above average).

However, as noted by Dr. Hansen (previously the head of GISS). “People in Central and Southern Europe, Northern Africa, and the Middle East realize that their summer climate is becoming noticeably hotter (temperature change per decade since 1970 above). And there is already more warming “in the pipeline” due to existing greenhouse gas (GHG) amounts than the warming that has occurred so far, as we describe in a paper (“Global Warming in the Pipeline”) near completion.”  Moreover, the warming is consistent, without the dips we might have expected over half a century period in the past.

Here’s where things go from possibly bad to worse: “Moreover, GHGs will continue to increase for decades because the gases are primarily a product of energy use and other activities that are essential to the health and well-being of a still-growing global population.”

Hence, we’re in a bind: we can’t stop producing energy because we (the human race) requires energy to heat our home, power our industries, etc. Yet, we can take steps that can make a difference. By these steps I don’t mean a complete switch over to so-called “clean energy.”

Why not? Because we need to answer questions such as: “What is the carbon footprint of wind turbines and solar panels? Is the world sufficiently focused on recycling and are the materials used even recyclable? Are we going to end up with a clean tech graveyard full of old, useless power generation tools equipment? Are the materials sustainably sourced or are we exploiting labor and the planet to achieve our renewable energy targets?”

So, perhaps what we need is a smart approach, and not social engineering. So long as the goal is to redistribute wealth, there will always be those who will fight strongly against it. Instead, we need to encourage and support research to improve energy efficiency and environmentally friendly energy sources. While solar and wind power are “renewable,” producing the components and maintaining them can be environmentally unfriendly. For instance, wind towers are estimated to kill 1.7 million birds a year, although, many more birds die from other causes. Hence, we need to consider both the pros and cons, with one potential source of energy being from the newest generation of nuclear power plants, although this is a not a complete solution to our energy needs.

Technology has and hopefully can solve many of our problems, even if it also creates problems….

One relatively recent invention is “Waze.” Just the other day, I said to my wife I wonder how we ever got anywhere without it. She said, back then there was just one road from there to there, while now there are many ways to get from here to there.

I noticed that her Waze program speaks in English, even though she is a native Israeli. I asked her why, and she said that it is a great way to learn English. Perhaps, this is the reason my Waze program is in Hebrew. My Waze program speaker is also a woman, which means I get to practice both my Hebrew and I can also pretend she is my wife giving me directions — a great way to get improve “Shalom Bayit” in the house.

My daughter was married, Thank God, last month. To be honest, it was really hard to give her away. It was a very stressful time, and I even lost my hearing in my right ear. While such a hearing loss might be attributed to a virus, such viruses might take advantage of a reduced immune response (perhaps brought on by stress). My hearing is sort of back, but it comes and goes. Thank God, my daughter and her new husband also come and go, which means she might have left the home, but she’s not gone. That last bit makes a big difference.

Regardless of how I fared during this time (and I am happy she seems happy), I did have the opportunity to wish her well. I was blessed to give this “drasha” at her Sheva Brachot.

“Icrat” has a bit of an unusual name. Or, perhaps she has a pretty typical name — Miriam. Yet, neither Icrat nor Miriam are and were typical people, respectively.  Miriam is credited with helping to save Moses from the Nile River. What is Icrat credited with?

[Icrat…} kept me company over the last 8 or so years — she got up every Shabbat morning and took a walk with me. I’d like to credit her with being first — first has its advantages, but it also has its disadvantages — as parents learn how to be parents.

“Lastly, I’d like to credit her with being stubborn. Being firm in your beliefs and standing strong on your beliefs is a mark of a person with confidence, but also someone who thinks things through, and doesn’t decide on a whim.

“Of course, Icrat is more than just a 20 year old going on 21. [Her name means “cornerstone, Hence] she’s a cornerstone, a foundation of the person who will become her life as she moves forward “soon” with her Chatan Amir.

[In fact,] “the Pinat Icrat is said to be the stone (a rather large stone) where Jacob went to sleep, dreaming of a future ascension to God and Heaven. It’s said to be a large stone in the Temple, where Hashem is said to reside. These are high aspirations.

“A good marriage needs a foundation stone, and it needs a cornerstone. That’s husband and wife. When times are difficult for one, the other must become the rock to be leaned on.

“Yet, to be strong in marriage is not to be inflexible. While stones can’t bend without breaking, both partners in marriage must indeed do just that. In fact, sometimes, one needs to not only bend, but add some more layers — whether its sandstone, or igneous rock, or even molten rock. To be successful, those layers must be those of your partner as you grow more similar to each other.

[Yet,} “not even rock is forever — it wears, it weathers, and in those moments sometimes all that is needed is for [one] to be a rock of support and comfort [for the other.]

“Geodes are rounded, hollow stones, filled with crystals… When you open them up, both halves are filled with sparkling crystals, often of great beauty.

[Likewise,} “a beautiful marriage is one where, in fact, the ingredients and personality of two people come together to form a single entity. Were one to cut open this entity, one would not find its constituents, but a single set of crystals representing, in your case, the multifaceted aspects and experiences of your married lives.

“To get there, from here, means that it’s not enough to be everything the other person always wanted, but not because one is, but because one can never be. It’s only possible to be sensitive and caring, and to give what can be given if not more.  It’s through giving to one another that feelings will continue to grow and sparkle, like the geode you’ll come to be.

About the Author
Dr. Barry Lynn has a PhD in Environmental and Atmospheric Sciences. He has an undergraduate degree in Biology. He is a researcher/lecturer at the Hebrew University of Jerusalem, and is the CTO of Weather It Is, LTD, a weather forecasting and consulting company.
Related Topics
Related Posts