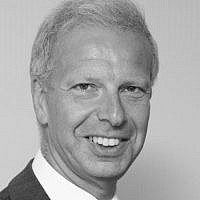 The Blogs
Howard Leigh
Apply for a Blog
Advertisement
Please note that the posts on The Blogs are contributed by third parties. The opinions, facts and any media content in them are presented solely by the authors, and neither The Times of Israel nor its partners assume any responsibility for them. Please contact us in case of abuse. In case of abuse,
Report this post.

Recently made remarks suggesting that Christians are unwelcome in Israel are wide of the mark. They are belied by the fact that Israel is the only country in the Middle East where Christian numbers are growing, and where Christians occupy senior positions in the law, in medicine, in academe and in the arts. Indeed, recent polling suggests that the vast majority of Israeli Christians are satisfied with their lives.

For the first time since the COVID-19 pandemic began, thousands of worshipers recently crowded inside the Church of the Holy Sepulchre for one of the year’s most important Christian festivals. Constructed by the Roman Emperor Constantine the Great, the ancient holy site is revered by Christians worldwide as the place where Jesus is said to have been crucified, buried, and resurrected. The joyous, mostly unmasked crowd celebrated “Holy Fire” to mark the Easter season. Despite recent violence on the Temple Mount, Christians are and always have been welcomed by Israel to worship and celebrate in the Old City and throughout the country at dozens of other biblical sites.

Unhindered freedom of worship was not always possible in Jerusalem, home to holy sites for the world’s Christians, Muslims, and Jews. Since Israel assumed control of Jerusalem, the Jewish state has ensured that Muslims and Christians enjoy the privilege of worship that Jews were denied for years.

Today, a number of arrangements exist between Israel and various religious communities to manage control of the Holy City’s sensitive religious sites. On the Temple Mount (Haram al Sharif), custodianship of Muslim holy sites, such as the Al-Aqsa Mosque, is held by the Hashemite Kingdom of Jordan, as part of a long-standing agreement referred to as the “status quo.” The Church of the Holy Sepulchre is managed in an uneasy alliance between the Greek Orthodox, the Franciscan Order (known as the “Latins”) and the Armenian Church, along with other sects – with the keys to the church’s great doors held by the same Muslim family for five centuries.

The Old City of Jerusalem is smaller than one square kilometer. Conquered dozens of times over the millennia, there is no more complex and emotive place on Earth. While it is religious authorities that control the operations of these revered sites, it is ultimately the State of Israel that is held responsible for the security of residents and more than four million annual visitors of all faiths. This year, Jewish, Muslim, and Christian religious festivals overlapped in April, leading to heightened tensions in a city that is strained at the best of times. In violence inspired by the terrorist group Hamas, as many as 150 Palestinians have been injured in unrest at Muslim holy sites. Last year, similar events helped spark war between Israel and terrorists in Gaza.

Fervent religious celebrants, cheek-to-jowl at centers of worship, literally on top of one another, require careful and considered leadership from religious figures representing the three major faiths prominent in the Holy City. Recent commentary suggests that Christians are no longer safe in Jerusalem, but the city’s authorities have invested unprecedented resources to close socio-economic gaps for residents of all faiths and have prioritized opportunities for peaceful exchange and interreligious coexistence.

With Jerusalem long a hotbed of faithful fervor, it is important to recognize that extreme actions, such as verbal harassment and vandalism against people and sites, have been committed by hotheads from every background. Israeli authorities investigate and act against all reports of vandalism and other anti-social behaviors, but more needs to be done. Jerusalem’s religious leaders and global faith representatives should work together alongside advocates for intercommunal peace to keep channels of communication open and work toward the common objective of peaceful coexistence in the city. Organizations such as the Jerusalem Foundation are doing their part to support worship for all communities in the city, and religious leadership should work with civil society groups such as this to strengthen the community and infrastructure of faith.

With hate crimes rising around the world, now is the time to invest in interreligious dialogue and coexistence initiatives to drown out the small minority of hotheads in the Holy City.

Co-authored by Baroness Deech, Lord Palmer of Childs Hill, and Lord Turnberg, members of the UK House of Lords.

About the Author
Lord Leigh of Hurley is a senior partner at Cavendish Corporate Finance LLP. Following qualification as a Chartered Accountant with Deloitte Haskins & Sells, Howard established Deloitte’s Mergers and Acquisitions Group and developed an expertise in company sales. In May 1988 he left to set up Cavendish Corporate Finance LLP and is currently the Senior Partner. In September 2013, Howard was elevated to the Peerage as Lord Leigh of Hurley. He serves as president of Westminster Synagogue and chairman of The Jerusalem Foundation (UK). Howard became chairman of Manolete Partners plc in September 2021.
Related Topics
Related Posts
Comments