The Blogs
Gidi Grinstein
Apply for a Blog
Please note that the posts on The Blogs are contributed by third parties. The opinions, facts and any media content in them are presented solely by the authors, and neither The Times of Israel nor its partners assume any responsibility for them. Please contact us in case of abuse. In case of abuse,
Report this post.

Crisis being an opportunity for deep change is a truism that applies to the Jewish world like it applies to all other human groups. Indeed, the current upheaval in the relations between Diaspora Jewry, primarily in the USA, and the Government of Israel can offer a historic opportunity for a redefinition of these relations.

There is one common denominator among those who are alarmed by this crisis: all of us believe that Israel must remain true to its ethos and mission of being the nation state of the entire Jewish people. Therefore, it must serve, to the highest possible extent, as a unifying force among all Jews.

The practical implications of these notions are now subject to intense debate and require exploration. Indeed, many important voices have come forward in recent weeks, calling for a range of responses to the Israeli government decision: Daniel Gordis and Steven Nasatir suggested targeted-action to force Israel’s politicians to change policies, and Yehuda Kurtzer suggested an “alternative agenda,” which focuses primarily on new ways of bringing the two communities closer together, while recognizing their growing differences.

However, these ideas overlook key underlying reasons for this crisis, and therefore also key aspects of the essential response to it. In March 2017, following two years of research and strategy work, the Reut Group published its extensive study of the condition and direction of Israel-Diaspora relations. The first page of that document warned of a “perfect storm” that may turn 2017 into a pivotal year in this regard. Unfortunately, that prediction is turning out to be true. This means that we must act with precision and effectiveness, based on a brutally honest discussion.

In a nutshell, while the immediate tendency may be to throw more money at the problem to underwrite more of the same Israel-Diaspora dialogue with few modifications, the current situation may actually call and allow for a new approach. If I had a magic wand and dollars to spend, my first step would actually be introspective: to allow two months for the articulation of a new narrative for Diaspora Jewry in its relations with Israel, for formulating a new agenda and for establishing measurable outcomes. The next step would be to build a coalition of Israeli organizations that share this agenda and empower them to lead the fight for the continued realization of the vision of Israel as the nation state of the Jewish People in the 21st century. Here is why:

First, we must acknowledge the far-reaching implications of the long-standing “inferiority complex” of organized Diaspora Jewry, and especially its leading institutions, in these relations. It emanates from a combination between the domineering outlook of a successful Zionist movement, especially since 1967, which fundamentally negated Diaspora life, as well as from the absence of a strong counter-narrative by Diaspora Jewry that confidently celebrates its legacy and future. That failure belongs to Diaspora lay leaders, professionals, rabbis and educators who have not embraced an unapologetic outlook which holds a vibrant Diaspora to be a Zionist imperative, not a compromise. It underlies the ‘abusive’ conduct by Israel’s political elite, which takes for granted the financial and political support of organized Diaspora Jewry, especially in the USA, but feels no obligation to be respectful, not to mention in awe, of its unique ways.

Second, in the absence of equal intellectual standing, a compelling vision for the Jewish people in the 21st century cannot emerge. That vision should probably call for a world Jewry — a global network of Diaspora communities and the State of Israel — which is secure, prosperous, resilient and making a significant and distinct contribution to humanity emanating from a quest to build a model society. Yes, this formulation should be subject for debate and is unlikely to ever be universally agreed. But the point here is that any compelling vision for the Jewish people by any organization must be based on a partnership among two ‘entities’ that are equals in relation to the Jewish future: the State of Israel and Diaspora Jewry.

Third, we must honestly locate the heart of the challenge in Israel. Yehuda Kurtzer’s article, Minding the Gap: A Primer for Jewish Professionals and Philanthropy, implied that both sides are to blame for this crisis. But in reality, it is primarily Israel which is failing this relationship. It is a simple truth that Israeli leaders are much less educated about Diaspora Jewry than Diaspora leaders are about Israel; that Israeli children know much less about Diaspora legacy than Diaspora kids know about Zionism; and that every emerging Jewish professional and leader in the Diaspora travels to Israel repeatedly, but that is hardly the case for leaders in the Government of Israel. And the list can go on and on.

This naturally highlights my fourth point, which is absence of a comprehensive agenda for Israel-Diaspora relations that emanates from the vision of Israel as the nation state of the Jewish people. While this agenda may be subject to debate and evolving, today it is basically non-existent. In the past it may have focused on aliyah and absorption or on supporting Israel’s physical security. The well-being and safety of smaller Diaspora communities, fighting anti-Semitism and the delegitimization of Israel and supporting Jewish education around the world are also key issues, as are the advancing of pluralistic Israeli society and securing the place of progressive Judaism in Israel.

But nowadays that agenda must be expanded to address the current crisis and to build the foundations for a revitalized relationship. For example, it can be expected that all senior officials of the Israeli government will have much deeper acquaintance with Diaspora Jewry through visits and immersive experiences among Diaspora communities that include engagement with their institutions and leadership. It can also be expected that Israel’s government will hear various positions of Diaspora Jewry when it deliberates on matters that affect it. And most importantly, there must be an active quest for a shared agenda of contribution to humanity, in a way that empowers both the State of Israel and world Jewry.

Fifth, who should be the carriers of this agenda? Some are now calling for doubling-down on forums for dialogue between Israelis and Diaspora Jews, flying more people across the ocean to have discussions in English among people who understand the difference between Reform and Conservative Judaism. Unfortunately, that group is marginally small in Israel. As a past and current participant in many of these groups, I now find them to be a misallocation of resources. The time has come for Diaspora Jews to give the work back to the Israelis. It is time for the debate on Israel-Diaspora relations to take place in Israel and in Hebrew and among Zionist leaders who frame argue their case from the perspective of Israel’s ethos and national security.

Hence, the best possible investment in this area is supporting a coalition of Israeli NGOs who span the political and religious spectrum but share with Diaspora Jewry the vision of Israel as the nation state of the entire Jewish People. Central to this coalition are Israelis who had a formative communal Jewish experience in the Diaspora such as former diplomats and shlichim of various organizations, as well as the dozens of organizations that are supported by federations and leading Jewish foundations in Israel, such as Schusterman’s ROI Community.

Finally, leadership in this area can and should come from the Diaspora. The Government of Israel, being a political entity, is unlikely to be able to offer such leadership, not to mention that it currently represents the dominant narrative that benefits from the status-quo of the relations. This is why Diaspora leadership must acknowledge that in this moment in our history it is the ascending power that has to be bolder.

Gidi Grinstein is the Founder of the Reut Group and the Author of Flexigidity: the Secret of Jewish Adaptability and the Crisis and Opportunity Facing Israel. Sections three and four of his book deal with the vision of Israel as the nation state of the Jewish people.

About the Author
Gidi Grinstein is the founder and president of the Reut Institute, an Israel-based strategy and action group focused on effectuating change in areas critical to Israel’s future. He is the author of Flexigidity: The Secret of Jewish Adaptability.
Related Topics
Related Posts
Comments 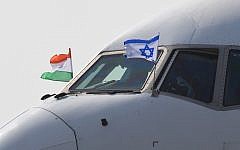