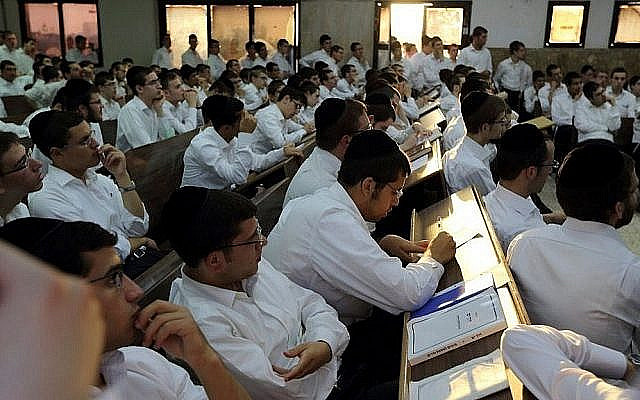 The coronavirus crisis might be the catalyst that finally compels Israel to upend its shortsighted accommodation with the Haredi minority, a lazy compromise that condemns this group to poverty and threatens to bring down the whole country.

Despite the occasional agitation over Sabbath observance or draft-dodging, the secular and religiously moderate majority has been mostly asleep at the wheel about this issue. But society is now seething over the perceived Haredi role in spreading the virus and making Israel the world’s first country to suffer a second national lockdown.

Haredi communities were always going to be vulnerable to COVID-19 because of overcrowding born of poverty and extreme fecundity, with families of a dozen not uncommon. But on top of that, certain Hassidic sects under the sway of criminally irresponsible rabbis have rebelled against pandemic precautions, leading to provocative videos of mass weddings and prayers.

Thus did Israel find itself a month ago with the world’s highest daily infection identification rate per capita: half the new cases and hospitalizations involve Haredim and all the most heavily infected communities are Haredi – or Arab. The government rejected corona czar Ronni Gamzu’s proposal for targeted lockdowns on those “red” communities. It preferred to shut down the entire country rather than offend the Haredim, despite the economic and societal calamity.

One could scarcely expect more from the cynical, corrupt and dysfunctional government of Benjamin Netanyahu, who is on trial for bribery. His Likud has no hope of a majority without the Haredi political parties and is essentially in their pocket.

People are right to be angry, but wrong to focus on corona, which one day will go just as it came. Israel faces a more existential problem: if trendlines continue, “Start-Up Nation” will be reduced to a giant yeshiva with its kosher kitchen empty and its palm outstretched to U.S. Jews.

According to a recent report by the Israeli Democracy Institute, the Haredi population in Israel at the beginning of this year was 1.125 million, 50 percent higher than a decade ago and about 12 percent of the population. The Haredi population increases by 4.2 percent annually and doubles itself every 16 years, about three times the country’s overall rate and probably four times the rate of non-Haredi Israel. Project that forward and you get a Haredi majority within the century. Some Haredi youth “drop out” – studies show perhaps 5 percent leave the Haredi lifestyle – but this is not nearly enough to reverse the outcome.

Is it wrong to hope for something different? Is it acceptable for the state to try to bring that about? Is it “anti-Semitic” to view with worry the rapid growth of this community? Such is the common refrain, and as with much of political correctness it is dishonest.

The average Israeli could not contemplate domination by the Haredim, not because of bigotry or “fear of the other” but due to heartfelt rejection of  oppression of women, contempt for science, subordination to rabbis, pitiful provincialism – and yes, also the fanatical cult of the Sabbath.

Remember that a reliable measure of a society’s likelihood to advance economically is gender equality when you hesitate to condemn Haredi insistence on not only gender segregation but modest dress for women, banishment of women from singing in public or serving in the Knesset, and efforts to change names of streets named after women.

All this has earned them well-deserved derision (despite a certain societal weakness for “Yiddishkeit”) which is zestfully reciprocated by Haredim who dismiss the “empty cart” of secular culture, as if the global treasure trove of science, literature, art and philosophy are trifles that pale before ancient writings of religion experts who happened to be Jewish. And they are not joking.

There is little doubt what the Haredim would do with a national majority, and it would be insane for a secular person to view that prospect with equanimity. The secular people would flee the country, destroying what was left of its economy.

So there is not much point pretending that this is not a cultural war. In recent years, hostilities have involved the remarkable Haredi refusal to serve in the army. What began as a short-sighted draft exemption for a few hundred Torah scholars 70 years ago has ballooned into a colossal scam which encourages about 150,000 Haredi yeshiva attendees to neither work nor study anything that would make them gainfully employable in a modern economy.

In a contradiction, despite disdaining the secular state the Haredi street is firmly right-wing, resulting from a widespread racism against the Arabs that belies the unfounded notion that piety and morality correlate. Thus do the Haredim perpetuate a state of war in which they will not fight. They will also soon be half the settlers in the West Bank, living in communities protected by the military from the hostile and oppressed Palestinians surrounding them.

Previous efforts to compel small numbers of Haredim to agree to serve have had limited success, and secular Israelis’ zeal for the topic is tempered by concerns about swamping the military with religious fanatics: more agitation against the presence of women and the nature of their attire; uproars over kosher food and prayer times. It may be more practical to let them off the army hook altogether without requiring the yeshiva fig leaf, encouraging them instead to work. After all, participation in the workforce is a basic indicator of integration and independence.

The current picture is bleak. According to official government figures, the overall workforce participation for Israeli men in 2018 was 82 percent, which would be even higher factoring out Haredi men, whose own participation level was 48 percent. Moreover, much of that “participation” comes in the form of state-funded make-work for leisurely battalions of  kashrut supervisors, rabbinate functionaries and municipal apparatchiks.

Interestingly, Haredi women, banished from the yeshivot for less scholarly pursuits deemed to suit them, work as frequently as other Israeli women – around 75%.

Furthermore, despite some inroads (mostly by women) in the tech sector, Haredi men who do work don’t earn very well: their average salary of about 8300 shekels (some $2000) was 60 percent below the national average for men.

This is because the Haredim are also given a pass from a basic modern education of science, math and English. Some Haredi schools are not this way, but 60% of Haredi high schoolers go to institutions that are, yet still get state funding.

Indeed, the state is the grand enabler of this foolishness: While students of medicine and computer science and business pay ever-rising tuitions, students at religious seminaries are themselves paid to be there – thousands of shekels a month, generally at taxpayer expense.

The Haredim live from the public trough to a degree unmatched by any other group in Israel and few on Earth, also receiving stipends per child and various tax breaks that Haaretz estimated in 2005 to reach 10,000 shekels’ worth of net income monthly on average.

In sum, the community to a great extent rejects modern education, military service and employment (for men), is subsidized by the secular state which it holds in high-minded contempt, and is growing at fantastical rates. This condemns it to poverty and the whole arrangement will one day inevitably fall apart.

This lunacy clearly must be fixed, yet politics to date have made that impossible. Once Haredi parties were thought to hold the balance of power between right and left. Now they are simply part of the right, which cannot afford to upset them. Yet it was long believed that if the left ever returns to power its leaders would court the Haredim as well.

But the pandemic may have been the last straw. The center-left public is at the breaking point with the Haredim, and now two right-wing sub-sectors are showing signs of rebellion as well.

First, Avigdor Liberman’s Yisrael Beiteinu party with its base of nationalist and secular Russian-speaking immigrants has broken ranks with the Haredim in what looks like a decisive manner, and now sort-of backs the left. Second, Naftali Bennet’s Yamina party, while more fascistic than Likud, represents a “national religious” stream that is less religiously fanatical than the Haredim, opposes their behavior, and is trying to build itself by attracting secular voters.

There are scenarios in which the next election finally removes Likud from power. If that happens the stars may align for some important, overdue reforms:

The Haredim tend to live in their own communities, but widely dispersed, which probably prevents the a territorial divorce in which they are not forced to modernize but also do no one else harm. Absent  independence or territorial autonomy, non-Haredi Israel simply must stop enabling and subsidizing its own destruction.

Until now non-Haredi Israel could not band together to do any of this because of divisions on the Palestinian issue that seemed more important. They’re equally important, and this may actually be more urgent as well as more resolvable. If the Palestinian issue must wait a few years, it could be in no better cause.

There will be screaming and shouting and probably rioting as well. That is better than national suicide. Like much in life, the way forward is clear if you block out the noise and simply do what must be done.