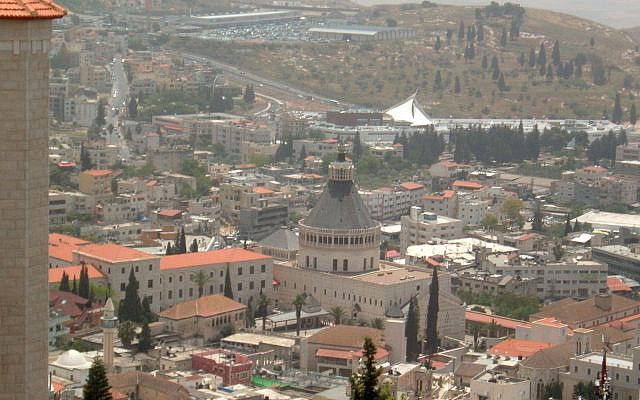 The Basilica of the Annunciation in Nazareth. (Photo by Almog - Own work, Public Domain, Wikipedia.)

A few weeks ago, Christians leaders in Jerusalem initiated a smear campaign against the state of Israel. It began on Dec. 13, 2021 when the patriarchs of Christian churches in the Holy Land issued a statement accusing Israel of tolerating a campaign on the part of Jewish extremists to drive Christians from the Holy Land, despite the fact that Israel is the one country in the Middle East whose population of indigenous Christians has increased since the end of World War II.

This is not a new phenomenon. Over the past few decades, anti-Israel activists, most notably Palestinian Christians and their allies in the West, have learned how to use Bethlehem, the scene of Jesus’s birth, and Jerusalem, the scene of the crucifixion, in their propaganda war against the Jewish State. Because of the significance of these cities to Christian salvation narrative, they play a huge role in the religious imagination of Christians throughout the world.

Groups such as Bethlehem Bible College, the Holy Land Trust, and Sabeel Ecumenical Liberation Theology Center use these cities to tell a story of Israeli oppression and Palestinian innocence. They use them to portray Israel as an affront to Christian sensibilities.

Every Christmas season, artists draw cartoons of Mary and Joseph being unable to enter Bethlehem because of the security barrier. And every Lent and Easter season, Christian “peace” and “justice” activists use Jerusalem, the scene of Jesus’s crucifixion, in a similar manner.

Stories told by Christian “peacemakers” regularly portray Israelis as if they are crucifying the Palestinian people, who are portrayed as innocent, Christ-like sufferers. Sabeel Ecumenical Liberation Theology Center has held conferences in Jerusalem that specialize in promoting this narrative.

As dishonest and propagandistic as these Bethlehem- and Jerusalem-based campaigns are, they are profoundly effective tools in the effort to demonize the Jewish State because they tap into deep-seated Christian tendencies to view Jews as obstacles to God’s plan for humanity.

There is, however, an opportunity to respond to these efforts to demonize Israel: use the city of Nazareth, where Jesus grew up, to highlight the suffering endured by Christians (and other religious minorities) in Muslim-majority environments in the Middle East.

A conference on the status of Christians (and other religious minorities) in the Middle East, held in Nazareth, would highlight the manner in which jihadists and Islamists throughout the Middle East make it impossible for Christians to live ordinary lives in their homes. 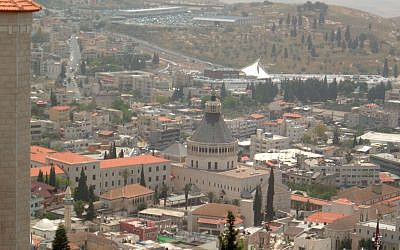 The Basilica of the Annunciation in Nazareth. (Photo by Almog – Own work, Public Domain, Wikipedia.)

Jesus enjoyed an ordinary and happy Jewish childhood in Nazareth – a normal childhood that has been denied to Christians in every country in the Middle East – with the exception of Israel.

Nazareth is the site of one of the most important Catholic churches in the world, the Church of the Annunciation. This basilica commemorates the moment when Gabriel informed Mary that she would give birth to the Messiah. She accepted the task given to her with the phrase, “Let it be done to me according to thy word.”

In other words, Nazareth was where it all began.

This is not to say everything is perfect in Nazareth. Nazareth has been the scene of some very ugly anti-Christian polemics from Muslim extremists. On several different occasions, local Muslims have posted anti-Christian banners near the Church of the Annunciation in an effort to intimidate and harass Christian believers who come to pray.

Nevertheless, these stories of harassment, coupled with information about the banners, can be used to initiate a factual discussion about the mistreatment of Christians in Muslim-majority countries in the Middle East.

Attendees of the conference would hear stories from Christians (and other religious minorities) who have suffered at the hands of extremists in Iraq, Syria, Iran, Lebanon, and areas under Palestinian control. Speakers could describe how their rights are protected in Israel, the Jewish state, and threatened in other countries in the Middle East.

Speakers at the conference would describe the theological and juridical underpinnings of oppression of Christians (and Jews) in Muslim-majority environments throughout the world and how moderate and reform-minded Muslims are working to challenge this problem. In particular, leaders from the United Arab Emirates could be invited to talk about how they are allowing for the normalization of Christian religious practices in their country, over the objections of extremists in the region.

And while we’re at it, the conference could give voice to moderate Muslims in the West and the Middle East who have been vilified by their co-religionists. They could explain that the 9/11 attack was not just an attack on the West, but another salvo in the ongoing war against reform-minded Muslims and secular human rights activists throughout the world.

Many of these Christians are Charismatic and Evangelical Protestants who are not suffering from the doldrums that afflict many (but not all) church communities in the West. They are confident in their faith and are not afflicted with the guilty self-hate that many Christians in the West project onto the Jewish state. And while they have theological differences with the Orthodox and Catholic Christians who are suffering the effects of Islamic oppression in the region of Christianity’s birth, they understand that these communities are suffering, and dying, for the name of Christ.

In addition to listening to conference speakers, attendees could go on tours to Haifa, where they could visit the Baha’i Gardens, a symbol of religious freedom in the Jewish state. The Baha’i are brutally oppressed in Iran, the world’s worst state sponsor of terrorism and a primary exporter of religious violence and antisemitism.

Attendees could also visit Hebron, another city where anti-Israel activists have deployed in their efforts to demonize Israel. In this city, conference attendees could speak to experts knowledgeable about the negative impact international NGOs play in the Israel-Palestinian conflict. They could also learn about Palestinian efforts to erase Jewish history from the city.

The explicit message that people would take away from the conference would be a simple one: “Muslim extremists are making it impossible for Christians (and other religious and ethnic minorities) to live ordinary lives like the one Jesus was able to live while growing up in Nazareth. And by the way, these extremists aren’t just attacking Christians, but their fellow Muslims who want to get out from under the shadow of jihadism and take up residence in the modern world.”

This conference has to be organized by Christians in Israel, the West, and the Global South who have been so poorly served by ecumenical institutions such as the World Council of Churches, which has demonized Israel and obscured the reality of jihadist violence against Christians (and Jews) in the 21st century.

Let it be done.