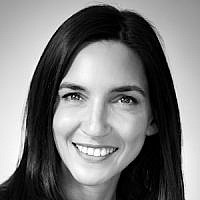 The Blogs
Polly Bronstein
Apply for a Blog
Advertisement
Please note that the posts on The Blogs are contributed by third parties. The opinions, facts and any media content in them are presented solely by the authors, and neither The Times of Israel nor its partners assume any responsibility for them. Please contact us in case of abuse. In case of abuse,
Report this post.

In Israel in recent years, it has become increasingly difficult to direct the attention of everyday citizens to our ongoing conflict with the Palestinians and the ways in which we can finally arrive at a resolution. Cynicism and apathy have proved difficult to counter.

Lately, however, things seem to be shifting. Over the two weeks prior to the US President Donald Trump’s inaugural visit to Israel, which coincided with a heightened debate in the country about the fate of the West Bank and Gaza, we at Darkenu decided to seize a rare opportunity to engage the Israeli public in an honest conversation about our nation’s most pressing issue. Our message was simple: in order to protect the Israel that we love and cherish, and so that we can preserve our Jewish and democratic home, Israel must loudly and confidently say “YES!” Yes to a diplomatic agreement, yes to a separation from the Palestinians, and yes to taking advantage of the regional opportunities now developing, which could transform the Middle East, and our place within it.

As part of the campaign, we put up more than 100 billboards all across the country and set up field stalls at train stations, shopping malls, and in crowded pedestrian areas where activists asked the Israeli public to sign postcards calling on Members of Knesset to stand with their constituents and also say yes. The response was astounding, and in less than two weeks, nearly 15,000 Israelis signed their names to the initiative.

In all honesty, we were never worried about Israeli public support for the agenda itself. For almost two decades, polls have consistently demonstrated that a vast majority of Israelis support the principle of an agreement with the Palestinians that sees separation into two states. We ran our own poll in the aftermath of the campaign, and found that 64% of Israelis agreed with the statement that “Israel’s interests dictate a solution of separation from the Palestinians,” while only 13% disagreed. What concerned us was that too many Israelis  have lost faith that this vision can be fulfilled. Despite a large majority wanting, dreaming of change, millions of Israelis seem resigned to such a reality being impossible.

When we asked Israelis what they thought was likely to happen in the coming months, 14% of respondents believed that the US would go on supporting the Israeli government if it continues to build settlements across the West Bank while 37% thought that the US would work to resume negotiations. The most popular answer, however, comprising 49% of responses, was that nothing about the Israeli-Palestinian conflict was likely to change.

Of course, the facts on the ground in this part of the world never remain static—the situation is changing all the time. Threats and opportunities present themselves constantly, and violence—like the terror attack in Jerusalem last week—is never far beneath the surface. The one thing that doesn’t seem to change is our government policy, which continues to drag our nation towards disaster. The Israeli people, overcome with complacency, are marching like sleepwalkers towards this fate. We urgently need a national debate, so that we the people can decide between a future of annexation or separation, precisely because Israel’s character and security are at stake.

According to findings from the Tami Steinmetz Center for Peace Research, if respondents are given a specific, detailed agreement, support for separation from the Palestinians drops by about five percent. While not a dramatic difference, it is understandable that it is easier to support a general idea without having to consider the difficult issues and sacrifices that would have to be made. But detailed discussions are now not only unavoidable, they are imperative if we are to restore trust and faith in the viability of an agreement. If majorities on both sides support the idea of separation into two states, but can no longer imagine it actually happening, then it is up to the leaders of both sides to make their intentions clear and to lay out their vision to rekindle faith in the future.

This is where Darkenu comes in. We are the largest grassroots organization of our kind in Israel, with over 200,000 supporters. We are not waiting for elections, not waiting for a specific leader, we are uniting the moderate majority behind an agenda that vast swathes of Israelis support. The moderate majority in Israel is large—it transcends the left/right and religious/secular divides that we have watched grow into chasms in recent years.

Israelis share common values and a deep love for their country, but they have lost their faith in it – and they have lost their voice. We must reawaken popular political discussion about the Israeli-Palestinian conflict among everyday citizens by providing a deep and informative discourse, one that is inclusive and open, without artificial distinctions between left and right.

If our leaders won’t give us hope, we will build it ourselves, citizen by citizen, community by community, just as we built the state itself. Despair is a luxury that we cannot afford in Israel, and neither is indecisiveness. Israel must give a clear, unequivocal and informed “yes!” and then we must turn the page so that we can begin the next chapter in this country’s extraordinary history.

About the Author
Polly Bronstein is the CEO of Darkenu, a grassroots movement with a mission to build and mobilize the Israeli moderate camp.
Related Topics
Related Posts
Comments