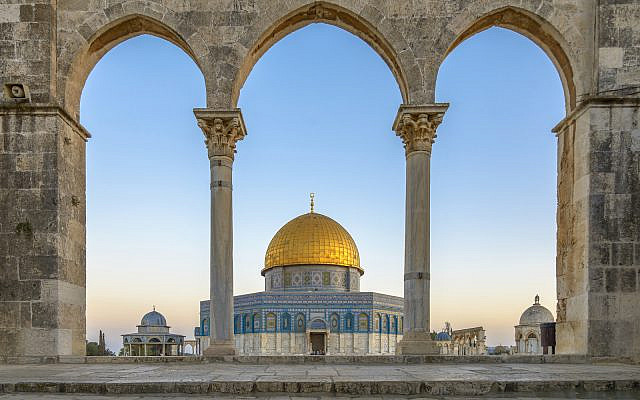 A few years ago, right-wing nationalist organizations devoted to the Temple Mount were buoyed by a poll they commissioned finding that 30 percent of Israeli Jews support rebuilding the Jerusalem Temple on the site of Solomon’s Temple.

The poll, reported in the July 12, 2013 issue of the Israeli newspaper Haaretz, was commissioned by the Joint Forum of Temple Mount Organizations. It asked Israeli Jews, “Are you for or against erecting a Temple on the Temple Mount?” only 30% answered YES, while 45% said NO, and 25% said they were not sure.

The last few years have seen changing attitudes to the Temple Mount among the national religious and ultra-Orthodox sectors. There are currently dozens of fringe movements working to change the status quo at the holy site. Some are reconstructing ceremonial objects used in the Temple in the past, while others are making practical preparations for its rebuilding, including renewal of animal sacrifice. Others deal in political lobbying and in encouraging Jews to visit the Mount.

A growing demand gathering political support is for the status quo on the Mount to be changed so Jews will be able to pray there. The police currently prohibit Jews from praying on the Mount, fearing an outbreak of violence. Among Zionist religious Jews questioned in the survey, 43% supported construction of a Temple, compared to 20% among non-Zionist ultra-Orthodox, and 31% among secular Jews.

The survey was financed by a fund called the Israel Independence Fund and was conducted with only 523 Israeli Jewish participants.

The survey further found that among the Israeli Jewish public there is a strong majority (59%) that favors the demand to change the status quo on the Mount. The survey asked whether “the state should enforce an agreement on the Mount, similar to one that exists in the Tomb of the Patriarchs in Hebron, which is shared by Jews and Muslims.” Only 23% of respondents answered “no” to this question.

Analysis of the survey’s results shows a significant change in attitudes among the national-religious public. While visiting the Mount used to be taboo, 68% of national religious respondents in the current survey said they would like to come to the site “as part of a visit to Jerusalem.” 60% of secular Jews answered the same way, while only 20% of ultra-Orthodox respondents expressed such a wish.

In response to a question over whether the state should enforce the right of Jews to pray on the Mount, 70% of national religious participants answered affirmatively, while 22% objected. In all, 48% of respondents agreed with such a move.

However, despite the changing attitude to the Mount, the Jewish public still considers the Western Wall to be Judaism’s holiest site — 66% singled out the Kotel for this distinction, compared to 29% who chose the Temple Mount.

But Orthodox rabbinic opinion actually discourages nationalistic attempts to physically rebuild the Jerusalem Temple. According to the majority of rabbinic opinion, the Temple will be rebuilt not by man but only by God’s Messiah; so we can only pray and wait. (Based on Rashi and Tosephot on the verse “The Sanctuary, O God, which your hands [God’s power] have established.” Exodus, 15:17.

And, since all Jews are in a state of ritual uncleanliness due to the absence of a “red heifer.” it is forbidden for Jews to even enter the area where the Jerusalem Temple was located. Also in the absence of precise information as to exactly where the Jerusalem Temple was located, a general ban was imposed on access for Jews to the entire Temple Mount. (Based on the verse “you (Israelites) shall build (for) me a sanctuary.”; Maimonides, Code of Law, “Hilchot Bet Ha-Bechirah,” Chapter 1, Paragraph 1.

Finally, a Muslim shrine presently occupies the site called, The Dome of the Rock. Often erroneously called the Mosque of Omar, it is not a mosque and it was not built by Omar. It was built in 691 by Abd-Al-Malik and it is regarded by Muslims as the third holiest site in the world. Any attempt to replace the Dome of the Rock would provoke a Muslim Holy War of cataclysmic proportions.

There is, however, a peaceful way to restore the Jerusalem Temple by using a small area of vacant land on the Temple Mount to erect a hologram of a Jewish house of worship that could be projected worldwide from a small space adjacent to the Dome of the Rock provided the Muslims would cooperate.

An even better way to redo the Jerusalem Temple would be to be inspired by the following fable, transmitted orally in both Arabic and Hebrew for many centuries and finally written down in several different versions in the 19th century, which illustrates how two holy places can be very closely connected even though they are physically separated by 765 miles. Some say this happened in the age of Adam or Noah, and others say in the generation when Abraham was born.

Two brothers who inherited a ‘valley to hilltop’ farm from their father divided the land in half so that each one could farm his own section. Over time, the older brother married and had four children, while the younger brother was still not married. One year there was very little rain, and the crop was very meager. This was at the beginning of a long-term drought that would turn the whole valley into an arid, treeless, desert where even grain did not grow, and all the springs dried up.

The younger brother lay awake one night praying and thought: “My brother has a wife and four children to feed, and I have no children. He needs more grain than I do, especially now when grain is scarce.” So that night, the younger brother went to his barn, gathered a large sack of wheat, and left his wheat in his brother’s barn. Then he returned home.

Earlier that very same night, the older brother was also lying awake praying for rain when he thought: “In my old age, my wife and I will have our grown children to take care of us, as well as grandchildren to enjoy, while my brother may have no children. He should at least sell more grain from his fields now, so he can provide for himself in his old age. So that night, the older brother also gathered a large sack of wheat, and left it in his brother’s barn, and returned home.

The next morning, the younger brother, surprised to see that the amount of grain in his barn seemed unchanged, said “I did not take as much wheat as I thought. Tonight I’ll take more.” That same morning, the older brother, standing in his barn, was thinking the same thoughts. After night fell, each brother gathered a greater amount of wheat from his barn and in the dark, secretly delivered it to his brother’s barn.

The next morning, the brothers were again puzzled and perplexed. “How can I be mistaken?” each one thought. “There’s the same amount of grain here as there was before. This is impossible! Tonight, I’ll make no mistake — I’ll take two large sacks.”

The third night, more determined than ever, each brother gathered two large sacks of wheat from his barn, loaded them onto a cart, and slowly pulled his cart toward his brother’s barn. In the moonlight, each brother noticed a figure in the distance. When the two brothers got closer, each recognized the form of the other and the load he was pulling, and they both realized what had happened! Without a word, they dropped the ropes of their carts, ran to each other and embraced.

Only God can make anything holy, and God thought the brothers’ love and concern for each other made their descendants worthy to rebuild a primordial Holy House in this valley; and later to build a new Holy House on that hill. So God sent Messengers to their descendants to guide them to do this.

When all those, both near and far, who revere these sacred places as a standard, share it in love with everyone else who reveres it, then Abraham’s request for Allah to “Make this a land of peace, and provide its people with the produce of the land” [Surat Al- Baqarah, 2:126] will be extended throughout the world; and all the children of Adam, Noah and Abraham will live in Holiness, Peace and Prosperity.

I believe they are both right and God willing, someday everyone may see both cities and their sanctuaries as a pair of lungs; that are central to our spiritual inspiration by, and connection to, the One God of Abraham, Ishmael and Isaac. As the Qur’an states: “’Believers, be steadfast in the cause of God and bear witness with justice. Do not let your enmity for others turn you away from justice. Deal justly; that is nearer to being God-fearing.” [Surat Al-Ma’idah, 5:8]

If we can live up to the ideal that religious pluralism is the will of God, we will help fulfill the 2,700-year-old vision of Prophet Isaiah: “In that day there will be a highway from Egypt to Assyria. The Assyrians will go to Egypt, and the Egyptians to Assyria. The Egyptians and Assyrians will worship together. In that day Israel will join a three-party alliance with Egypt and Assyria, a blessing upon the heart. The LORD of Hosts will bless them saying, “Blessed be Egypt My people, Assyria My handiwork, and Israel My inheritance.” (Isaiah 19:23-5)

About the Author
Rabbi Allen S. Maller has published over 450 articles on Jewish values in over a dozen Christian, Jewish, and Muslim magazines and web sites. Rabbi Maller is the author of "Tikunay Nefashot," a spiritually meaningful High Holy Day Machzor, two books of children's short stories, and a popular account of Jewish Mysticism entitled, "God, Sex and Kabbalah." His most recent books are "Judaism and Islam as Synergistic Monotheisms' and "Which Religion Is Right For You?: A 21st Century Kuzari" both available on Amazon.
Related Topics
Related Posts
Comments
Advertisement