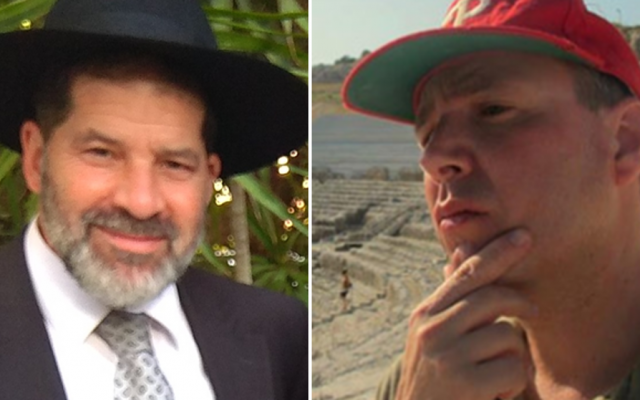 To each, his own hat (Dan Perry photo)

I try not to debate religion, but merely pronounce my views and then run for the hills. But every rule must have its exception.

And so I have been cajoled by Rabbi Herschel Grossman into an exchange in the wake of my article last week questioning the very concept of faith, in religion as in anything else. I wrote that all I could manage was hopes and assessments. But Heshy, who had previously befriended me digitally to lament prior Godless ravings of mine, was not impressed. I offer here the exchange:

I appreciate the opportunity to respond to your article questioning religious faith. The basis of Jewish practice and belief is unique, and you gloss over this important point. You are correct that faith cannot be demanded of an individual who sees the world in starkly materialistic terms, but your own assumption that religious Jews base their life on fantasies demonstrates that you simply are unaware of the foundations of Jewish education.

In the absence of prophecy, the word of the Bible is inaccessible to modern man, and our perceptions are limited to empirical and logical evidence, hence I do understand your own skepticism. Attempting to access a spiritual dimension to existence without tools is like expecting a deaf and blind person to appreciate the scenery of  a mountain view, or the cohesion and coordination of a symphony orchestra.

But, Jewish education begins and ends with scholarly study. We don’t have prophets, but we still have a Torah, which is accessed not through faith, as you surmise, but rather through intense concentration, diligence and focus. From a young age, our youth are trained to think penetratingly and incisively, to challenge assumptions, and to question the law until they understand on their own.

Much of the skepticism that exists towards religious faith today has never even had a taste of this – they wouldn’t be able to discuss intelligently, or even cite, one Talmudic discussion, the pillar of Jewish education. Experience has shown that in those communities where Yeshivos existed, and where the study of Talmud was held in high regard, Jewish faith has thrived. In the absence of this basic foundation for thinking and understanding, faith withers.

Thanks for your thoughtful feedback on my article.

I do not deny that there is much to be learned from Jewish and other scripture.  But I certainly must dispute that there is not a strong element of acceptance of dogma based on faith among those who are genuinely religious.

On the most basic level there is evident acceptance of the concept of a creator, despite this not being “proven” empirically by anything that has been written. If such proof existed, at the same level of scientific evidence that we require of anything else that is serious, it would be the most astounding development in millennia of civilization.

You are basically saying that if one truly studied and achieved expertise on the Torah and Talmud, then faith would arrive. I am saying the people who can stomach doing such a thing with their sadly limited time on Earth are those who are predisposed to have faith, or have been maneuvered into having it since birth.

You say we have the Torah. Yes, you have it and I have it too, but I also have much more. My time is limited and my inclination to hand huge amounts of it over to the religious teachings from centuries and millennia ago is weak.

Still, though, many secular people including myself have been exposed to Torah study more than you might assume, and to the general practice of religions all our lives. It is inescapable.  It’s true I’m not an absolute expert. Yet I think that is OK. I dislike or reject many things, from white supremacism to rap music, and I do not intend to achieve genuine expertise in them nor assess it is required. (And I know you will not stoop to feigning shock at the “comparison” because there is none and it would be a cheap shot.)

In general I cannot agree that a person must achieve expertise in everything in order to have a view.  Sometimes – usually – the essence of a thing is sufficient. Most of us are experts in only a limited number of things, yet we must make judgements all the time, including with every purchase and with every political ballot cast.

It is natural to focus on the culture into which you were by happenstance born, but there is more to life than that.

I am not claiming that religious Jews do not need faith. I am saying that our understanding and relationship to Jewish faith is predicated on our connection to the Torah, which we know and understand. This infuses our lives with a spiritual dimension, broadening our awareness beyond the mundane and pleasure-seeking activities which characterize much of modern culture.

I would suggest your own argument has come full-circle. You began by implying faith is a foolish fantasy yet now seem to allow some room for the importance of religious study.

The Torah addresses your own position, those who champion only the material world, but not in a positive light: “Let us eat and drink, for tomorrow we will  die” (Isaiah 22) and: “… for how long … will scoffers be eager to scoff and fools hate knowledge?” (Mishlei 1).

The religious Jew may not understand everything about life, but we do understand where we are coming from, and to where are headed. While the secular perspective controls the airwaves and dominates public discourse, we have an inner world, a dimension of intellectual honesty and integrity. I invite you into the Bais HaMedrash to debate these issues … if you dare.

Thank you, Heshy. I may drop by one day. I have, in fact, accepted such invitations before. Trust me, nothing new will be revealed, but it is good to have discussion.

I must say there is some arrogance in Mishlei 1, in equating religious study with knowledge. I daresay there are other forms and sources of knowledge. But in the end, the heart wants what it wants, and you simply love the Torah and the Talmud. They give you joy and provide you with what wisdom you assess that you need.

I just recently finished reading every novel by W. Somerset Maugham. Same with Graham Greene, Stefan Zweig, Vladimir Nabakov, Guy de Maupassant, Alberto Moravia and Kingsley Amis. I know “Monty Python and the Holy Grail” pretty much by heart (I’m afraid it rather skewers religion). I have every song ever recorded by a multiplicity of artists.

Those are things I love and there is wisdom there too and the two worlds can intersect.

The Who, for example, channeled their inner Ecclesiastes when they said: “Meet the new boss; same as the old boss.” (Who’s Next, Track 9)

But the ultimate classic, worthy of the Book of Prophets in my view, is this: “And in the end, the love you take is equal to the love you make.” (Beatles, Abbey Road, Side 2, Track 10)

So what has been said will be said again; there is nothing new under the sun. Meanwhile, fond regards from Tel Aviv!