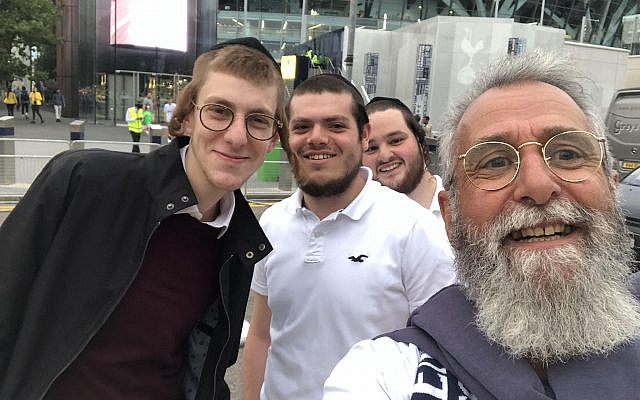 Spurs fans and author outside the Tottenham Hotspur stadium. (courtesy)

I was shocked, when given a cotton Spurs face mask, to find it was made in China. I felt like someone had bought me a pork sausage!

On the tube home, hours after the match, I was still singing. On two black coffees!

Yet before the game, we were looking into the abyss, comparing the two teams and anticipating our season. We were up for a tonking. Fourteenth or fifteenth place awaited us, then slow terminal decline.

To understand, you need the fixture’s background- a terrible last season. Our best player, England Captain, provider of most goals and assists in the league last year, wanted to leave. For our opponents today. He wasn’t in the squad. Maybe not even in the ground.

We took our seats, high in the huge South stand at Tottenham Hotspur. Flags carrying our motto “To Dare is to Do” were on each seat. The stadium was awash with them.

We greeted the familiar faces around us, whom we’d not seen since lockdown. “Gums” and “Moley” sat in front of us. Don’t know their real names.  “Gums “is a legend, so-called because he hasn’t many teeth, and always hands out fruit gums.  Comes from Southend every game, often with a huge old flag, embossed with a Spurs crest, that had lain on his Dad’s coffin,  at the funeral. “Moley” is so-called because he looks like one with his buzz-cut and bright little face.

To my right is D——, who like myself has grown a longer beard over lockdown. The newcomer on Gums’ left turns out to be his dad.

None of us have much hope but the crowd is positive, defiant, singing, chanting. Not a mention of our star player.

A deep thumping on the walls at the back of our stand, then a low-pitched guttural self-identifying drawn-out cry: “Yids!

A slow passionate chorus of “Oh when the Spurs, go marching in” and I am standing, leaning forward, arms outstretched, fingers fluttering.

Then our cheeky anthem, with its chorus, accompanied by bouncing,

The thing I love most is, Being a Yid!”

I have been coming to the ground since 1965, but the sounds were different. Backs to the wall roars of love, encouragement, and “ein breirah (1).”

And we won! Unbelievably. Versus the English Champions. Everything that was wrong last year was put right. Players who had regressed were back to normal. The midfield- resilient. The attack- unhesitating.

To Dare was To Do.

Towards the end, with an instinctive sense of timing, the crowd, who’d not mentioned our home-grown superstar, sang ‘his’ song (One of Our Own) to our home-grown full back as he was substituted. He quietly clapped us.

Only In the last few minutes did we mention our want-away star, “Are you watching, Harry Kane?” If he wanted to go, he could!

At the end, Son, our now talismanic scorer, walked towards us, applauding, waving his arms to increase our cries, as if saying, “To Dare is to Do. We go forward. Together. The Team and The Fans.” I suddenly realise the corners of my eyes have tears.

And that’s when the Jewish stuff started.  I’m identifiably Jewish at Spurs. Kippa with the Tottenham crest, Tzitzit out, Mosaic beard!  Gums has told me of his half-Jewish grandparent and knows we won’t eat his non-kosher sweets. This time, it was D—–’s Dad, who told us his Jewish story.

In 2012, he had been a volunteer at the London Olympics helping the Israeli team. Others were too afraid of the security risks. He described how one shabbat, he had helped a Paralympian who had been found a room where he could observe shabbat, and detailed Mossad’s security measures like invisible tape on the windows. At the end of the Olympics, the team gave him a little party.

“You ever been to Israel?” I asked.

He had! Early 80s. Took his mother, shortly after his father died, as his dad had always wanted to take her. He’d been stationed there, 1936-9, and “fallen in love” with the place.

“The trip changed me. I’m not especially religious, but when you see the 12 stages of the Cross in Jerusalem, you just know something happened there.”

By now, the stadium’s empty. I fancy going down to the longest bar in the world “The Market Place”, at the bottom of the stand, to soak up the atmosphere. Son wants to go home. Stuff to do.

The crowd is milling around. I decide against alcohol (calories) and have two excellent black coffees) and wander. The Jewish stuff continues.

A man, there with his extended family, tells me he did a lot of charity work with Jews. I chat to two London Ambulance controllers, as an ex-NHS professional. One points to my Yid lid.

“I’ve never seen a real Yid here before.” He means someone wearing the full gear.

“A lot wear hats,” I say, “so you just don’t realise. Although they’re not down here much, lots of Stamford Hill Chassidim support Spurs.”

“Where d’you get that?” He means my Tottenham Kippa.

I explain that the Jewish artefacts shops sell them for many teams. It must be a nice little earner. We both laugh!

Leaving, the stadium, I run into three Chasidim (photo), waiting for a friend who’s in the Merchandise shop. I take a photo of us together.

People are still singing, ‘Are you watching, Harry Kane?”

We can do without him.

To Dare is to Do!

So, what’s all this to do with Uyghurs? It may seem trite, but our triumph seemed symbolic. That’s  football for you!  We’d looked into the abyss and overcome. Please God by the Uyghurs! To Dare is to Do! It worked for Soviet Jewry, South African non-whites, the fall of the Iron Curtain. “If you will it….” (2).

More seriously, Spurs, and other clubs, unwittingly sell merchandise that uses Uyghur Slave Labour. Chinese cotton, a huge earner for China, is sourced from the Uyghur region (Xinjiang), where, say regulatory, human rights and commercial auditing organisations, reliable audit of supply chains is impossible. The Free Labor Association prohibits all sourcing and production from there and tells me that non-cotton clothes are made in the same factories.

I was shocked, when bought a cotton Spurs face mask, to find it was made in China. I felt like I’d been given a pork sausage!

I’m sure Premier League football clubs don’t want their fans to wear products of Uyghur slave labour, so Spurs and other fans, let’s write to clubs to source from elsewhere, like Nike, H & M, Adidas and Lacoste did, and until they do let’s avoid such merchandise.

“One of our own”, Spurs fan and comedian  comedian David Baddiel has done sterling work, within the “kick-it-out” organisation combatting racism in football, to highlight antisemitism (3).

If football’s serious about kicking out racism, why not kick out this supreme form of racism, and campaign for clubs to stop sourcing clothing from China?

David, would you help us with this at at Stop Uyghur Genocide? After all, Uyghur Slavery and Genocide, really concern  UK Jews.

What do we have to lose?

Come on You Spurs!

And let’s not throw it all away against Wolves next week, eh?

1. We have no choice

2. “If you will it, it is no dream” Theodore Herzl, Alteneuland

3. David Baddiel is, ironically, given its use in this blog, very much against the Yid word in football. Most Spurs fans I know, including Jews, take pride in this moniker, and many is the time, when wearing a Spurs scarf in the street, I have been enthusiastically greeted with “Are you a Yid?” by other Spurs fans, who have not espied the kippa on the back of my head, or my tzitzit peeping out beneath my shirt. The club has been unable to eradicate the chants at the games. However, I understand his point, and let us just say this is a “makhlohet le shem ha-shamayim” (an argument for the sake of heaven).