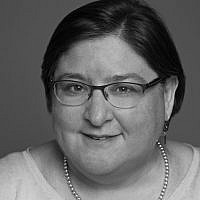 The Blogs
Hara Person
Apply for a Blog
Advertisement
Please note that the posts on The Blogs are contributed by third parties. The opinions, facts and any media content in them are presented solely by the authors, and neither The Times of Israel nor its partners assume any responsibility for them. Please contact us in case of abuse. In case of abuse,
Report this post.

One hundred years ago, members of the Central Conference of American Rabbis (CCAR) met in Cape May, NJ and voted 56 to 11 to affirm the right of women to become rabbis.  The Reform rabbis who voted yea – all of whom were men – took a crucial first step that day to advance equality in the rabbinate. However, it would have been a very different outcome if not for a group of impressive and convincing Jewish women – the wives of these CCAR rabbis who gathered that day in New Jersey.

This vote, which took place just two years after the 19th amendment was ratified, was inspired by the enfranchisement of women but expected to fail. As lore tells us, the wives encouraged their husbands to vote in favor, recognizing the symbolism of the moment and the future that was possible. And while the resolution did ultimately pass, the vote was only symbolic for another 50 years. It was not until 1972 that Rabbi Sally Jane Priesand became the first woman ordained at a rabbinical seminary. While today, the membership of the CCAR looks very different than it did in 1922, it is only because of women like the rabbinic wives and Rabbi Priesand who paved the way.

In 2022, we mark the 100th and 50th anniversary of these two momentous events at the upcoming CCAR Convention in San Diego. It will be the first time we gather as rabbis since 2019 because of the pandemic, a needed opportunity to recharge, reconnect, and spend time in spiritual renewal. And even as we celebrate the gender diversity reflective in the Reform rabbinate today, we are continually called upon to follow in their footsteps to advance women’s rights and rights of people of all identities in our congregations and communities. This is particularly imperative as politicians attempt to restrict reproductive rights across the country and we await a Supreme Court decision in the case Dobbs v. Jackson Women’s Health Organization that could undermine Roe. v. Wade as we know it by triggering a wave of abortion restrictions in states across the country.

Roe v. Wade was decided just one year after Rabbi Priesand was ordained, and the idea of reverting back five decades is truly unsettling. History has proven that those who need an abortion will seek one, even by unsafe, illegal means, often at the risk of their own lives if necessary. I was raised on my grandmother’s stories of her mother, my great-grandmother, a poor Eastern European immigrant, having at least two knitting needle abortions on the kitchen table because she already had four children she could barely feed.

The belief in reproductive rights among the Jewish people is more than just an expression of progressive political values; from the Torah and Talmud to Maimonides, there is profound support within Jewish sacred texts and scholarly teachings for the right to abortions, and for prioritizing the life and wellbeing of the living woman over the rights of a fetus. For example, the Jewish teaching of kavod habriyot—the sacred obligation to provide medical care. Unfortunately, as a result of a long-term, concerted effort by the Religious Right to make “religious” a synonym for “anti-abortion,” current discourse largely ignores the existence of a religious perspective in support of reproductive rights.

As rabbis, we must look to the bold women who broke the “stained glass” ceilings 50 and 100 years ago as inspiration to continue this fight towards equality, and proactively facilitate conversations about reproductive health, as well as rights and justice for all within our congregations, organizations, and communities. By making our support for reproductive rights public and a priority, we not only can advance this vision, but also redefine the narrow understanding of religious views on abortion that dominate the discussion right now and likely will intensify come the Supreme Court’s decision in June.

As we face a probable new beginning in the fight for reproductive rights, the irony is not lost that this is the year we mark major anniversaries in women’s leadership in the Reform movement that led to my becoming the first woman in history to lead the CCAR. In order to not go backwards, we rabbis and clergy must use our positions to forcefully make clear that the faith perspective on reproductive rights is not monolithic, that abortion is a Jewish value, that everyone should be able to make their own decisions about their bodies and their health, and we must continue the fight for unrestricted access to abortion and reproductive healthcare.