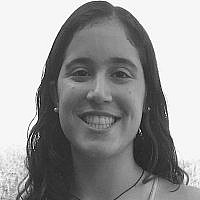 The Blogs
Sydney Siegel
StandWithUs High School Alumni
Apply for a Blog
Advertisement
Please note that the posts on The Blogs are contributed by third parties. The opinions, facts and any media content in them are presented solely by the authors, and neither The Times of Israel nor its partners assume any responsibility for them. Please contact us in case of abuse. In case of abuse,
Report this post.

Similar to many Jewish kids, my connection to Israel began at sleep away camp. I was nine when I spent my first summer at URJ Camp Coleman. Coleman was where I was first exposed to Israelis, Jewish culture, and how special Shabbat can be.

Seven summers later, I went to Six Points Sports Academy before 11th grade. There, I developed strong relationships with my Israeli counselors and learned about the life of an Israeli soldier. After camp, I visited Israel for the first time with my family. I instantly fell in love with its beauty and diversity. When my plane took off from Ben Gurion Airport, I began to count down to the next time I would be in my favorite place.

In January, 2018 I had the once-in-a-lifetime opportunity to spend a semester in Israel as part of URJ Heller High program. Seventy-six North American high schoolers traveled to Tel Aviv as complete strangers for the four month program. We learned 3,000 years of Jewish History, the Hebrew language, and general studies classes together. We traveled to Poland to learn about life before, during, and after the Holocaust. We hiked across Israel. We even participated in a mock-basic army training. I had no idea how much I could grow as a person and a Jewish teen from this experience. When I returned home, I was ready to do something with the knowledge I acquired. I was filled with so much passion for Israel and the Jewish people.

I was fortunate enough to be accepted as a StandWithUs (SWU) High School Intern. SWU was exactly what I needed. It is an international, non-profit which educates about Israel. In August, I attended a five-day conference in Los Angeles. Together, we learned from our adult coordinators and each other. We shared our uniquely personal Israel stories.

Many became involved with StandWithUs because we faced anti-Semitism. In fact, when SWU’s Southeast high school director Rayna Rose Exelbierd, asked the room full of 91 students from North America to raise their hand if they were subject to anti-Semitism, nearly every hand went up. I heard stories of classmates drawing Swastikas on Israeli flags, coins being thrown at the Jewish students, or being told the Israel Defense Forces kill babies. Unfortunately, these real stories are not as uncommon as one would think. I have never been more motivated to make a difference.

The first step in success is knowing you can have a team to count on. This year, Shani Kadosh, Elye Robinovitz and I represent Atlanta as the StandWithUs High School Interns. We represent three different high schools in the Atlanta area: Atlanta Jewish Academy, Weber, and Northview. StandWithUs’ newest initiative is the Teen Leadership Council (TLC). There are TLCs throughout the country making an impact in their communities. Just like interns, TLC members do not have to be Jewish. Everyone has their own Israel story.

From October 14-28, StandWithUs sent IDF reservists across the country to share their experiences serving in the IDF, their backgrounds and life in Israel. Barak and Lyra (last names are withheld for security purposes) were the stars of our first TLC event. It was a public event at The Weber School.

Many leaders in the Atlanta Jewish community attended including Garry Sobel, FIDF National Board Member and Shinshinim, high school graduates from Israel who are delaying their army service. Roey Shoshan, the Hillel Director at the University of Georgia and Sebastian Parra, the StandWithUs Hispanic Fellowship Director also came to the event. None of this would be possible without Michal Ilai, the Israel Programs Coordinator at The Weber School. Thank you all for your support.

One of my goals is to educate non-Jews about Israel. Israel is not just a Jewish state, it is an innovative and exciting place. There is so much to love. From Israeli music, food, and culture to technological advancements and medical discoveries, Israel is truly incredible. Most people do not know Israel is the only democracy in the Middle East, Tel Aviv started out as a desert, and Israel has mandatory army service for both men and women.

Barak and Lyra shared stories of their life in Israel and their experience serving in the IDF with my school’s JROTC. JROTC is a club throughout the US for students interested in joining the United States’ military. The room was very diverse. A Palestinian girl wanted to hear “the other side of the story.” An African American football player missed part of the warm-up because he wanted to listen to Barak and Lyra. He has visited Israel and loves it. A Korean girl wrote a long note in perfect cursive, thanking the reservists for what they do and how inspired she was by their stories. Later, she asked me how she can visit Israel. Even the local police officer wanted to meet Barak and Lyra.

Another event I arranged at school was through the Model UN club. Model UN is an international organization which gives students the ability to learn about and discuss worldwide issues and play the role of diplomatic leaders. Rayna Rose Exelbierd spoke at an after school event for 80 students about the United States’ relationship with Israel. She talked about Jews in the Civil Rights movement, Zionist US presidents, and how important the Israeli American relationship is for the world today.

These events reminded me not only how much I love Israel, but how special my internship is. StandWithUs has given me the opportunity to share my passion and knowledge with my community. Thank you to everyone involved in my Israel journey.