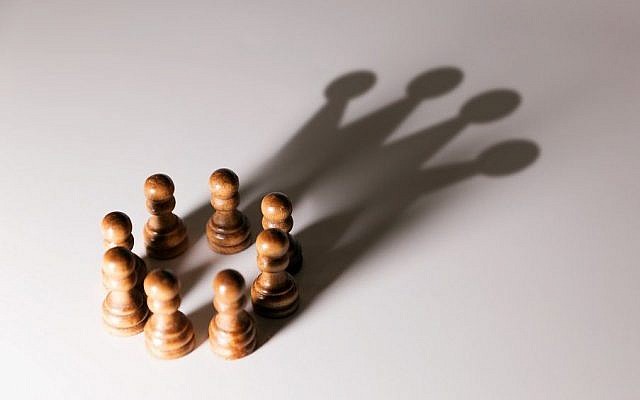 Our parsha talks about monarchy: “When you enter the land that the Lord your God is giving you, and have taken possession of it and settled in it, and you say, “I will set a king over me, like all the surrounding nations,” set over you a king whom the Lord your God chooses.” (Deut. 17:14-15). So it should be relatively easy to answer the question: From a Jewish perspective, is having a king a good thing or a bad thing? It turns out, however, to be almost unanswerable.

On the one hand, the parsha does say, “set over you a king.” This is a positive command. Maimonides counts it among the 613. On the other hand, of no other command anywhere does it say that that it is to be acted on when the people say that they want to be “like all the surrounding nations.” The Torah doesn’t tell us to be like everyone else. The word kadosh, “holy”, means, roughly, to be set apart, singular, distinctive, unique. Jews are supposed to have the courage to be different, to be in but not entirely of the surrounding world.

Matters are made no clearer when we turn to the famous episode in which the Israelites did actually ask for a king, in the days of Samuel (1 Samuel 8). Samuel is upset. He thinks the people are rejecting him. Not so, says God, the people are rejecting Me (1 Sam. 8:7). Yet God does not command Samuel to resist the request. To the contrary, He says, in effect, tell them what monarchy will cost, what the people stand to lose. Then, if they still want a king, give them a king.

Nor does the historical record resolve the issue. There were many bad kings in Jewish history. Of many, perhaps most, Tanakh says “He did evil in the eyes of God.” But then there were also good kings: David who united the nation, Solomon who built the Temple, Hezekiah and Josiah who led religious revivals. It would be easy to say that, on the whole, monarchy was a bad thing because there were more bad kings than good ones. But one could equally argue that without David and Solomon, Jewish history would never have risen to the heights.

Even within individual lives, the picture is fraught with ambivalence. David was a military hero, a political genius and a religious poet without equal in history. But this is also the man who committed a grievous sin with another man’s wife. With Solomon the record is even more chequered. He was the man whose name was synonymous with wisdom, author of Song of Songs, Proverbs and Kohelet. At the same time he was the king who broke all three of the Torah’s caveats about monarchy, mentioned in this week’s parsha, namely he should not have too many wives, or too many horses, or too much money (Deut. 17:16-17). Solomon – as the Talmud says[1] – thought he could break all the rules and stay uncorrupted. Despite all his wisdom, he was wrong.

Even stepping back and seeing matters on the basis of abstract principle, we have as close as Judaism comes to a contradiction. On the one hand, “We have no king but You,” as we say in Avinu Malkeinu.[2] On the other hand, the closing sentence of the book of Judges (21:25) reads: “In those days, there was no king in Israel. Everyone did what was right in his own eyes.” In short: without monarchy, anarchy.

So, in answer to the question: Is having a king a good thing or a bad one, the answer is an unequivocal yes-and-no. And as we would expect, the great commentators run the entire spectrum of interpretation. For Maimonides, having a king was a good thing and a positive command. For Ibn Ezra it was a permission, not an obligation. For Abarbanel it was a concession to human weakness. For Rabbenu Bachya, it was its own punishment. Why then is the Torah so ambivalent about this central element of its political programme?

The simplest answer was given by the outsider who saw most clearly that the Hebrew Bible was the world’s first tutorial in freedom: Lord Acton. He is the man who wrote: “Thus the example of the Hebrew nation laid down the parallel lines on which all freedom has been won … the principle that all political authorities must be tested and reformed according to a code which was not made by man.”[3] But he is also the originator of the classic statement: “All power tends to corrupt, and absolute power corrupts absolutely.”

Almost without exception, history has been about what Hobbes described as “a general inclination of all mankind: a perpetual and restless desire of power after power, that ceaseth only in death.”[4] Power is dangerous. It corrupts. It also diminishes. If I have power over you, then I stand as a limit to your freedom. I can force you to do what you don’t want to do. Or as the Athenians said to the Melians: The strong do what they want, and the weak suffer what they must.

The Torah is a sustained exploration of the question: to what extent can a society be organised not on the basis of power? Individuals are different. Michelangelo, Shakespeare and Rembrandt needed no power to achieve creative genius. But can a society? We all have desires. Those desires conflict. Conflict eventually leads to violence. The result is the world before the flood, when God regretted that He had made man on earth. Hence there is a need for a central power to ensure the rule of law and the defence of the realm.

Judaism is not an argument for powerlessness. The briefest glance at two thousand years of Jewish history in the Diaspora tells us that there is nothing dignified in powerlessness, and after the Holocaust it is unthinkable. Daily we should thank God, and all His helpers down here on earth, for the existence of the State of Israel and the restoration to the Jewish people of the power of self-defence, itself a necessary condition of the collective right to life.

Instead, Judaism is an argument for the limitation, secularisation and transformation of power.

Limitation: Israel’s kings were the only rulers in the ancient world without the power to legislate.[5] For us, the laws that matter come from God, not from human beings. To be sure, in Jewish law, kings may issue temporary regulations for the better ordering of society, but so may rabbis, courts, or local councils (the shiva tuvei ha-ir).

Secularisation: in Judaism, kings were not high priests and high priests were not kings. Jews were the first people to create a “separation of powers,” a doctrine normally attributed to Montesquieu in the eighteenth century. When some of the Hasmonean rulers sought to combine the two offices, the Talmud records the objection of the sages: “Let the royal crown be sufficient for you; leave the priestly crown to the descendants of Aaron.”[6]

Transformation: fundamental to Judaism is the idea of servant leadership. There is a wonderful statement of it in our parsha. The king must have his own sefer Torah, “and he shall read from it all the days of his life … not considering himself superior to his kinsfolk, or straying from the commandments to the right or to the left” (Deut. 17:19-20). Humility is the essence of royalty, because to lead is to serve.

Failure to remember this caused what, in retrospect, can be seen as the single most disastrous political decision in Jewish history. After the death of Solomon, the people came to Rehoboam, his son, asking him to lighten the load that Solomon’s projects had imposed on the people. The king asked his father’s advisers what he should do. They told him to accede to their request: “If today you will be a servant to these people and serve them and give them a favourable answer, they will always be your servants’(1 Kings 12:7). Note the threefold appearance of the word ‘serve’ in this verse. Rehoboam ignored their advice. The kingdom split and the nation never fully recovered.

The radical nature of this transformation can be seen by recalling the two great architectural symbols of the world’s first empires: the Mesoptamians built ziggurats, the Egyptians built pyramids. Both are monumental statements in stone of a hierarchical society, broad at the base, narrow at the top. The people are there to support the leader. The great Jewish symbol, the menorah, inverts the triangle. It is broad at the top, narrow at the base. The leader is there to support the people.

In contemporary terms, Jim Collins in his book From Good to Great[7] tells us on the basis of extensive research that the great organisations are those with what he calls ‘Level 5 leaders,’ people who are personally modest but fiercely ambitious for the team. They seek, not their own success, but the success of those they lead.

This is counterintuitive. We think of leaders as people hungry for power. Many are. But power corrupts. That is why most political careers end in failure. Even Solomon’s wisdom could not save him from temptation.

Hence the life-changing idea: To lead is to serve. The greater your success, the harder you have to work to remember that you are there to serve others; they are not there to serve you.

[3] Lord Acton, Essays on the History of Liberty, Indianapolis, LibertyClassics 1985, 8.

Never define yourself as a victim. There is always a choice, and by exercising the strength to choose, we can rise above fate.