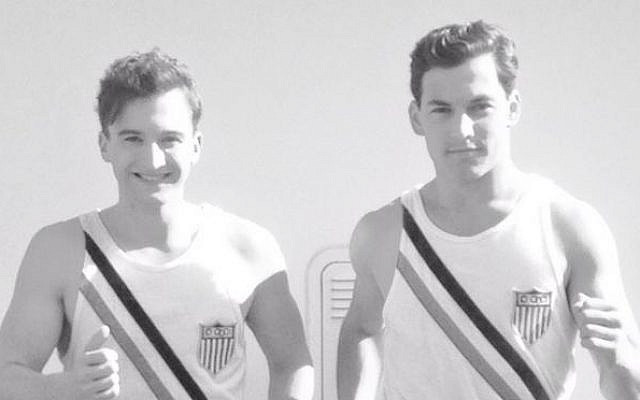 Marty Glickman and Sam Stoller, members of the United States track team, train on board the USS Manhattan, on their way to the 11th Summer Olympic Games in Berlin. —US Holocaust Memorial Museum, courtesy of Marty Glickman

Hitler had commissioned the renowned architect, Werner March, to build “The Olympiastadion” to surprise the world with the Olympics following the 1932 Los Angeles Olympics. In 1938, Leni Riefenstahl directed the documentary film “Olympia”, which was also the first feature-length film to be made at the Olympic Games.

Undoubtedly, for Hitler and Nazi Germany, the Olympic Games were a way to exert hard power and create a positive, vigorous, youthful and resilient image of a Germany that was just emerging from the economic crisis it had been left in after the first Great War.

Within this context, Marty Glickman, the son of Romanian Jews who had emigrated to New York and settled in the Bronx, as so many other Jewish families did, was chosen to represent the United States in the Berlin jousting competition. Along with Glickman, another Jew travelled, Sam Stoller, rival of the great winner of the ’36 Games: the legendary Jesse Owens. The same man who humiliated Hitler as perhaps few others did. He was perhaps the greatest and most famous athlete in the history of athletics, and he exposed the farce of Hitler’s myth of Aryan supremacy. Owens took four gold medals from the Nazi Olympics.

However, it was not only a “black” man like Owens who could have crushed the German athletes, for two Jewish boys would have done so too, had it not been for the exclusion they experienced. Coach Lawson Robertson informed both Marty Glickman and Sam Stoller that they would not participate in the 4 x 100 relay competition because he had received that order from above. It was the president of the US Olympic Committee, Avery Brundage, who gave that order. He wanted to avoid embarrassing Adolf Hitler, as he was one of his American supporters.

Jesse Owens interceded for Glickman and Stoller and told Robertson: “Coach, I’ve won my 3 gold medals. I’m tired. I’ve had it. Let Marty and Sam run, they deserve it. But, assistant coach Dean Cromwell told him, “You’ll do what you’re told,” because he wanted to please his boss Brundage.

Marty Glickman, despite missing the tournament of his life, was an officer in the 4th Marine Air Wing from 1943 to 1945. He went on to become a sports commentator and was one of the pioneers of this profession. As a broadcaster and sports commentator, he became the star he could not be in 1936. But he never stopped being a sprinter, for in 1963, at the age of 46, he competed and outperformed all the runners for the New York Giants.

Glickman returned to Berlin in 1985 to receive a commemorative plaque in lieu of the gold medals he was unable to win because of Brundage and Cromwell’s anti-Semitism.