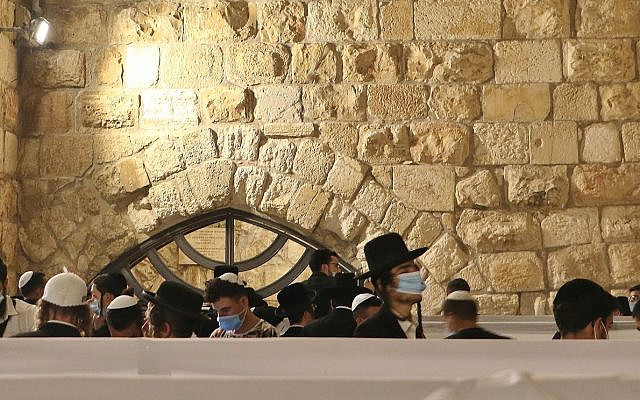 I feel your pain. Having to desist from the sacred acts which you have been performing zealously for decades and which define your lives, seems intolerable.

Passion is a potent component of the human experience. Without it, there would be no oomph to life. It is the catalyst for great love and joy, spirituality and depth, but it can drive hatred and war, destruction and death. None of us have the monopoly on fervor. We do not share Muslim and Christian beliefs but we can agree that their adherents are as ardent as us in their devotion. Yet this year St. Paul’s Square, the Catholic Holy of Holies, stood empty through Easter as the Pope conducted virtual video services. The Hajj in Mecca was performed by 1,000 symbolic pilgrims rather than the regular 2 million worshipers.

My Breslov brothers, we have something in common. For many years, we have met at the airport as I too set out annually to far off lands for the High Holidays, to sing the melodies and invoke the magnificent liturgy which has become wrapped around my soul. I will sorely miss this pilgrimage of sorts, made all the more painful by our local rabbi’s judicious decision to strip our services of much of its sublime poetry. While I cannot comprehend the spiritual value of the Rabbi Nachman experience, ordinarily I would defend your right to participate in this ritual as long as it did not impinge on the freedom and safety of others.

As for my brothers and sisters who gather en mass every Saturday night outside the Prime Minister’s house in Jerusalem’s Balfour Street, I admire your commitment. While I am not a great proponent of taking to the streets, I do support your fundamental democratic right to protest and commend your efforts in pursuit of your political principles.

However there are times when we are faced with the competing right to personal freedom and the societal need for order and control. We must all sacrifice one for the other to a degree. Without balances we can have no liberty to pursue our dreams, mutual and personal.  There are times when matters of life and death, tilt the scales, when sacrosanct individual privilege is outweighed by the right to personal safety, to the protection of life itself. It is our communal misfortune to be living in such times, when the gathering of multitudes has become the seed of suffering and death.

While there are those who claimed at the beginning of the pandemic that they had the Ear of God who said that He would protect the pious, it turns out that God’s word got lost in the translation. Finally, now that many of the pious of all religions have been stricken by the plague, we must accept what Paul Simon has known for decades. “God only knows, God makes his plan. The information’s unavailable to the mortal man.” (Slip Slidin’ Away.)

As for our Balfourites, you will agree that actualizing your license to protest thereby exposing thousands of heavy breathers to contact with one another has not managed to tilt the balance of power an iota. In addition, perhaps gathering outdoors reduces risk but it does not eliminate it.

So many people have sacrificed so much in compliance with the harsh decrees imposed upon us. If there is great disappointment in being deprived of a seminal once-a-week or annual event, consider the anguish young couples have experienced as their once-in-a-lifetime wedding dreams have been shattered. (That is of course unless you are related to the Belz Rebbe or an insider in the celeb scene in Tel Aviv or family of an important hamula.) Think of the heartache of parents, siblings and offspring who this year on Remembrance Day, with great, silent forbearance, forfeited their holy right to visit the graves of their loved ones who have fallen in the defense of our nation, in order to protect us all.

Representatives of both your camps point fingers at each other, reminding us of the other side’s transgressions. Please understand, not only do two wrongs not make a right, they also make fertile ground for disease and hardship.  This is not the time to assert one’s claims to freedom of individual expression based on the other’s wrongdoing. This is the moment for cooperation and compromise in a cause that unites us all.

Imagine the impact you Breslovers would make by declaring that you were ceding your holy experience, just this once, in favor of the safety of the House of Israel. Consider the Kiddush Hashem, Pikuach Nefesh and Or Lagoyim, 3 of the loftiest Jewish principles achieved by one act of Loving Kindness. I believe Rabbi Nachman would agree.  Think of the material support you would accrue for your heartfelt cause if you Balfourites announced that henceforth your protests would be implemented through social media rather than on the streets, in order to ensure the wellbeing of the thousands of attendees and by extension, every citizen in the country.

What a great paradigm of leadership and unity you would all display. How many healthy souls and hearts could you win over to your great causes? Our decrepit leaders have raised the “Divide and Rule” maxim to a new level. Defy them. Think bigger than the confines of your communes to our greater commonality and we will all be blessed.