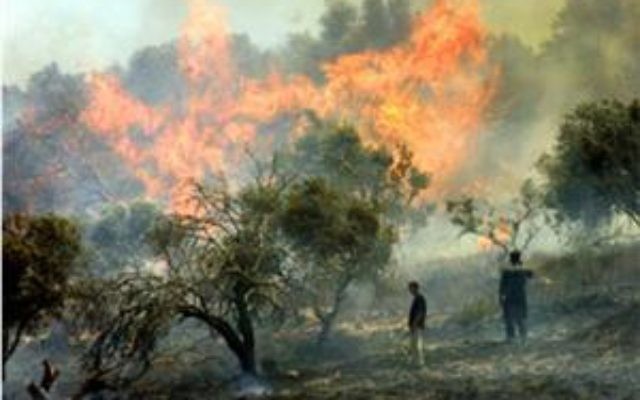 The second Torah portion after Tisha B’Av, called Eikev, concentrates all the contradictions between ethnocentric nationalism and humanism into just a few chapters. Eikev, more than any other section of the Torah, is our source for the concept of the “promised land”. But contrary to popular belief, the Torah teaches that it is a privilege to live in the holy land, not a right – a privilege that can be revoked when people abuse either the land or other human beings.

Losing the privilege to be in Eretz Yisrael, the land of Israel, is linked to the ecology of the land. The Torah praises Canaan as “a land of mountains and valleys”. Only “through the rain of the heavens does she drink water.” (Deut 11:11) “She is not like the land of Egypt, which . . . you gave drink with your foot (by pumping water from the Nile), like a garden of greens” (Deut 11:10). By the same token, this land is also not like the garden of Eden, for the garden of Eden was watered by four rivers, and was the source of those rivers.

A land that must drink from the heavens is a precarious land, a land where people can’t control irrigation and are completely dependent on rainfall, a land that is subject to drought. How then could this be the ideal, the promised land?

And yet it is, the Torah tells us, and the sign of this is that the “the eyes of YHVH the Lord your God are on her always” (Deut 11:12). This mystical-sounding relationship with the divine is simpler than it sounds: it means that God is continually assessing whether the people merit rain. Canaan is not like the land of Egypt, which can go for centuries sustained by the flooding of the Nile and the technology of the pedal pump, no matter the state of the weather or the state of justice, until it finally gets its proverbial seven years of famine or its ten all-consuming plagues. Unlike Egypt, the feedback loop in Canaan is short and swift – the loop may be closed, the consequences felt, within a season or two.

It’s clear that this is the intended meaning from the passage that follows, which we recite as the second paragraph of the Shma prayer. Eikev means “consequence”, and this paragraph describes the calamitous weather that is the consequence of not listening to the covenant: “the heavens will be shut up and there will be no rain, and the land will not give her produce, and you will be destroyed from off the good land which YHVH gives you.”

This paradoxically is what attracted our ancestors to Canaan: it was a place where they could experience the immediacy of God’s judgment, and hence God’s presence. It is this very fact – that our tenure is tenuous – that makes Canaan/Israel a holy land.

This idea that bad weather could be moral payback for our sins seemed outdated to enlightened people for a few centuries. Today, however, when we face global climate disruption due to warming, the idea that our actions have consequences on an ecosystem-wide scale is imbued with reality.

It’s not too much of a leap from there to Leviticus 26, where the sin of not letting the land rest invites God’s judgment and ensuing environmental disaster. But in Deuteronomy 10, it is our sins against other people that God is weighing. One commandment in particular is singled out for mention: “Love the stranger, for you were strangers in Egypt” (Deut 10:19) The reason given is that we worship the God “who makes justice for orphan and widow, and who loves the stranger, giving him bread and raiment.” (Deut 10:18)

Taken together, the Torah warns us that not just our environmental sins, but our moral failings, injustice to the poor, failure to love the stranger, as well as idolatry, all leave a toxic residue—most toxic especially in this land that is promised—a residue that can only be washed away with the destruction of human society.

We have spent centuries developing technology to make ourselves as impervious as Egypt to such consequences, to blind the eyes of God, so to speak. Whether in places like California or in Israel, we use modern equivalents of pedal pump technology to control our food supply, substitute petroleum-based fertilizers for healthy soil, outlast drought by pumping out aquifers. However, as we learn from climate change, technology doesn’t eliminate the consequences of our actions. It only defers them, and the more they are deferred, the wider and more profound the consequences will be.

Similarly, Israel and the U.S., like many nations, try to make themselves impervious to human threats using military technology. But when a society is decayed on the inside by oppression, military-style weapons can simply worsen the problem, as the U.S. shows with the death of so many African-Americans at the hands of police.

(Added in 2018:) Most recently, both Israel and the U.S. have acted as though some of their biggest threats come not from military attacks but from immigrants, whether they be asylum-seekers from Africa in Israel or Central American parents bringing their little children to the U.S., with the consequence that both nations are imposing great human suffering on some of the most vulnerable. In both nations, racism and hatred are increasing everyday, with the worst politicians leading in a vicious symbiosis with hatred, calling immigrants “infiltrators” and worse.

Today, the toxic residue of oppression continues to build in that long-ago promised land of Canaan, the land some people call the West Bank, others call Palestine, and still others, Judea and Samaria, Yehudah v’Shomron. 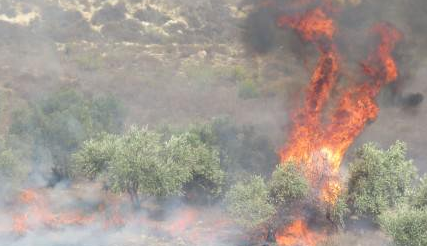 Some years back, I got a clear picture of this residue on a tour with Rabbis for Human Rights. We glimpsed Palestinian life in the northern West Bank. Here were the mountains and hills praised in the Torah, the olive groves in the valleys the rain would flow into. But the tour, which included kanafeh pastry in Nablus, also included views of Palestinian olive groves burned down by Israeli settlers.

What really shook me, though, was something that may sound minor. As we sped south down the highway en route to the Hebron hills (where the village of Susiya is being squeezed out of existence), we passed a bus shelter for a settlement called Yizhar, the likely source of the grove-burning settlers. There was a resident of Yizhar in the shelter, tall and skinny, yarmulke visible from a hundred yards away, tzitzit flying. He wasn’t just sitting there, though. The moment he saw a Palestinian vehicle coming towards him, he stood up to give it—us—the middle finger, not relieving his finger til we were well past the shelter.

I asked our Palestinian driver to slow down so I could take this man’s picture. Instead, the driver sped up. The look of terror on his face told me everything I needed to know about the extremist settlers in Yizhar.

I wish Eikev were taken to heart as a warning by these West Bank settlers. Instead, it is their inspiration, because in Eikev the Israelites are told to drive the Canaanite inhabitants off the land. Never mind that the rabbis clearly ruled that those laws didn’t apply any more even in their own time, let alone ours. Neither Eikev’s warnings nor its exhortation to circumcise our hearts inspire them to love the neighbor who is a stranger. Instead, the rule of the extremists seems to be n’kamah, vengeance, to do to others what is hateful to yourself.

Why can they get away with this? In essence, just as in the case of other sins against human beings and the Earth, the state with its military might—its technology—defers the consequences of the extremists’ sins. Protected by the military, they willfully think they can pluck out the eyes of the Lord, unafraid of the price that might be paid.

If you sympathize with the settlers, you might now be going over in your mind a litany of terrorist acts by Palestinians, the wave of stabbings, the murder of a girl in her sleep. You would be right not to forget those things. But what you should also remember is that treating the land as an idol while burning down its trees is the quintessential toxin: denuding the earth, violating the Torah command not to destroy fruit trees even in war, treating the stranger to you as anathema, doing to others what you yourself would hate, and on top of that idolatry.

Would the kind of people who burn olive groves also burn houses with human beings inside? Just over a year ago, the Dawabsheh family’s home in Duma, near Nablus, was firebombed and most of the family killed. Then in December, there was the vile wedding where settlers stabbed pictures of Ali Dawabsheh, the baby who died. And then in March, the home of the one Palestinian witness to the attack caught fire. Incidents like these were strongly condemned by Israelis of every party, yet the conditions that make them inevitable never change.

Are there any left who who truly love the land? Love it enough not to pollute it with blood? I look to a different kind of settler on the opposite extreme, Rabbi Menachem Froman, z”l, of Tekoa, who supported human rights as well as the national rights of Palestinians, who met with anyone and everyone, who saw strangers as sisters and brothers, and I also look to the settlers who are carrying on his work with like-minded Palestinians. They are people who envision themselves living together in peace on the land they all love, without regard to which flag is flying, who give me hope. People who pay each other condolences and plant trees together. People who recognize that military and technology can’t blind our God forever. Our God whose eyes must even now be weeping.