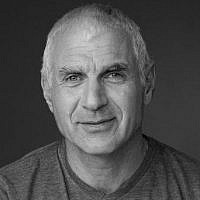 The Blogs
Haim Jelin
Apply for a Blog
Please note that the posts on The Blogs are contributed by third parties. The opinions, facts and any media content in them are presented solely by the authors, and neither The Times of Israel nor its partners assume any responsibility for them. Please contact us in case of abuse. In case of abuse,
Report this post. 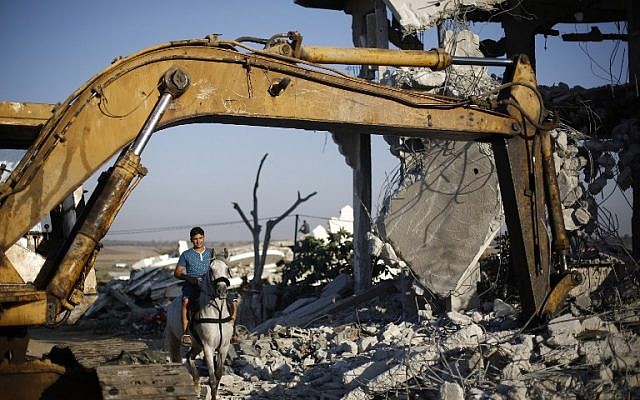 A Palestinian man rides his horse through the rubble of buildings, reportedly destroyed during the 50-day war between Israel and Hamas in the summer of 2014, in Gaza City on July 21, 2015 (AFP PHOTO / MOHAMMED ABED)

The Gaza Strip under Hamas control is a devastated area with desperate residents. International actors who have visited it in the years since “Operation Protective Edge”, claim that the local residents build their lives around the availability of electricity, which on good days is available in 8-hour shifts. Everything else is dependent on the government’s goodwill. Unemployment rates in the Strip are increasing and the economy depends on international aid that is constantly redirected to terrorism instead of to restoring the electrical, employment and water infrastructure.

Another problem is movement restrictions – the passages between Gaza and Rafah or between Gaza and Israel through the Erez Crossing are often closed and few people receive permission to enter or exit. Gaza’s residents are aware of the fact that they are unlikely to be able to leave and will, at best, depart it only for short periods for medical treatment.

Since the end of the ‘Protective Edge’ Israel-Gaza operation in 2014, tens of billions of dollars have been routed to restore the terrorist infrastructures: to expanding the tunneling operations, to smuggling in weapons. None of that benefits the lives of the residents. Instead of earmarking the money raised around the world to build industrial zones, create jobs, and restore infrastructure, Hamas chooses to direct most of the funds to prepare for their next terror campaign.

Until the recent elections, Hamas had been divided into three factions, which had existed in a state of not-insignificant tension: political, military and foreign. The warmongering military faction won their internal elections and took control of the political faction. That makes Gaza’s leadership more radical than in the past.

At the same time, the general security situation has sharply deteriorated following clashes between the Hamas and Salafi elements. These groups are connected to ISIS-supporting groups or organized crime or are comprised of former Hamas members who claim that their parent organization is now too liberal.

Hamas is trying to counter these even more radical organizations but in the event that its rule collapses a new reality may arise in which ISIS takes control and impose its cruel regime, similar to the one in Iraq and Syria, which would change the face of the Strip.

The residents of Gaza are desperately weary of Hamas’s current leadership. The estimates are that if Hamas doesn’t start working to improve the lives of Gaza’s residents then its next campaign will be focused on crushing an uprising among their own people. That conflict will almost certainly spill over into Israel.

In order to prevent the next conflict and as part of the State of Israel’s security concept, a document of understandings with clear conditions should be promoted. Israel will agree to the construction of a port, facilitate the transfer of goods, help improve the fabric of life in Gaza, and help to rehabilitate Gaza. In exchange Israel must push for the complete demilitarization of the Gaza Strip. Curbing Hamas’ military strength in return for economic development would help improve the lives of the residents of Gaza.

Since Israel does not, and will not, negotiate with a terrorist organization sworn to our destruction, and since Hamas refuses to have a dialogue with Israel, countries with an interest in this region will have to lead the process. Egypt — which sees Iran’s rising influence in Gaza and understands that someday soon it will look to expand into Sinai – will be willing to take on that task as it too stands to benefit from the process.

If a document of understandings fails or can’t be agreed upon, Israel will continue to use all necessary force to protect our citizens and our sovereignty. We have incredible military and technological power at our disposal in the fight against terror. That force will allow us to bring our enemies to their knees. We won’t hesitate to use force, wherever and whenever necessary, to protect ourselves and deal any threat. Terror organizations who have fought Israel in the past understand the devastation that a military conflict with Israel will cause to their infrastructure and their resources.

Gaza is a ticking time bomb. Every day in which we fail to deal with it will come back to us in the form of a fiercer military campaign. A patchwork policy is no solution; it is a band-aid and no more than that.

We will continue to defend ourselves whenever necessary and our enemies should have no doubt about our strength or our resolve but the only way to truly solve the threat on this front is through the realization of a political vision. A document of understandings will lead to long-term security for the residents of Israel, and especially for those who live in the area around the Gaza Strip.

Some will continue to argue that long-term quiet can only be achieved through the use of overwhelming force in the Gaza Strip. But unlike repeated military campaigns, there has been no serious attempt made to reach a pragmatic and limited political settlement. It is the role of responsible leadership sets out a clear path and work to provide a safer future for the people of the State of Israel.

Haim Jelin is a Knesset Member from Yesh Atid and former head of the Eshkol Regional Council, which borders the Gaza Strip. MK Jelin leads a Knesset caucus focused on promoting a document of understandings between Israel and the Gaza Strip in the framework of a long-term solutions.

About the Author
Haim Jelin is a Knesset Member from Yesh Atid and former head of the Eshkol Regional Council, which borders the Gaza Strip.
Related Topics
Related Posts
Comments