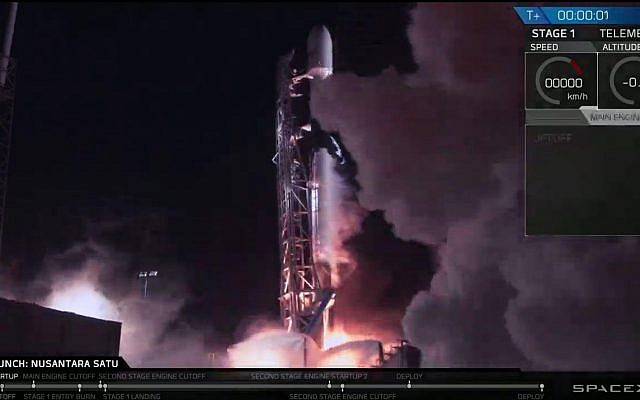 The Falcon 9 rocket lifting off with the Beresheet spacecraft on February 22, 2019, as seen on the command center screens in Yehud, Israel. (SpaceIL, via The Times of Israel)

Something that has stirred my soul and filled my heart with wonder and love and joy and pride.

It is called “Beresheet,” which is Hebrew and means “in the beginning.” It is also the first word in the Torah — the Jewish people’s oldest and most precious possession. And aboard this ship of dreams will be our Torah, Israeli songs, drawings by Israeli children, the Israeli national anthem, and our prayers.

I look at this magnificent feat of engineering and I cannot help but gaze upon it with the eyes of a small child, filled with wonder.

There are so many countries that are against Israel and every day brings more resolutions passed against it, passed by corrupt organizations and even more corrupt people. All around the world, anti-Semitism has been normalied leaving Jews in many parts of the world in actual physical danger. And what many Jews face today is not dissimilar to the darkest days of Europe in the 1930s and 1940s.

It leaves many of us feeling emotionally vulnerable, for a little over 70 years ago, we were a broken people whose ashes were spread in unidentified piles of soot, consumed by the hatred of those around us. We were a people who had no place to call home. We had no one to defend us. We stood alone in the world, shattered and shocked, hurt and bruised, broken and traumatized. Empty.

But not defeated, for we were still alive. Maybe barely. Maybe weakly. But alive. For air still filled our lungs and our flame had not yet been extinguished.

Our enemies still came at us. Still threatened to wipe us out. But we grew stronger and we continued to survive. And not just survive — thrive!

And from this poor destitute people, the heart of Israel beat again. And the nation of Israel rose once more. A poor country struggling on life support fought on — against overwhelming odds, defying the laws of history itself.

For defeat is not part of our story. And those words, words from thousands of years ago, were still ringing in our ears. The words of God that said to a shepherd who stood alone in the world, I will make of you a great nation.

A ship with a soul — a soul thousands of years old.

And with a pride that cannot be measured, I look to the sky above, to the stars, to the worlds beyond ours. I look at where we have been, how far we have come, and how far we will go. I look at how our people once grounded into dust have risen to soar among the heavens themselves.

In the beginning of time, there was darkness and then there was light.

Tonight, there will be one more light above us, one more star adorned with the flag of Israel, shining and glistening in the beautiful heavens, the same heavens which Abraham once looked upon with hope and wonder.

And the same heavens, we will be looking upon tonight.