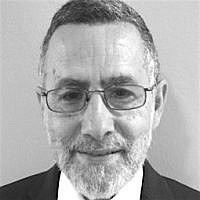 The Blogs
Menachem Genack
Apply for a Blog
Advertisement
Please note that the posts on The Blogs are contributed by third parties. The opinions, facts and any media content in them are presented solely by the authors, and neither The Times of Israel nor its partners assume any responsibility for them. Please contact us in case of abuse. In case of abuse,
Report this post.

When my daughter Ora and son-in-law Avi recently gave birth to a son, they were contacted by Hillary Clinton’s staff to find out the baby’s name. As the bris was delayed for some time, Ora and Avi could not supply a name when the request arrived. But I did not understand why anyone needed a name — wouldn’t it be sufficient to congratulate the baby’s parents?

Once the baby was named, the parents received two letters from Hillary: one wishing “mazel tov” to the parents, and a second one addressed directly to the baby. Hillary wrote to my grandson Nachum, wishing him “a lifetime of amazing adventures and accomplishments, with those who love you cheering you along the way.”

I have known Hillary Clinton for almost 25 years, and this is the Hillary I know: gracious, kind, and focused on building a better future for our children and grandchildren. While to some, these qualities are not evident in her public persona, they are in fact ever-present. And they underlie her engagement with the Jewish community — both in America, and in Israel.

Here at home, Hillary knows the Jewish community — including the Orthodox community — and she has been there for us as a US senator from New York. The spokesman for Kiryas Joel told me that endorsing Hillary in the 2016 primary was easy, because as Senator she was always there for his community’s needs. When I informed Hillary during the primary that she had been endorsed by both Kiryas Joel and Williamsburg community leaders, her response was, “What about Boro Park?” Clearly, Hillary knows the Orthodox world well; she understands the values and concerns of the community, and she has worked hard over many years to ensure those concerns are taken seriously.

I can also attest to the strong relationship Hillary has with the Jewish state. Hillary has visited Israel many times. Having accompanied her on two of those visits, I have witnessed the reciprocal positive emotional bond between Hillary and the people of Israel.

That bond spans decades. For example, as First Lady of Arkansas, Hillary brought an idea from Israel to Arkansas: introducing the HIPPY plan — Home Instruction for Parents of Preschool Youngsters.  Modeled after an Israeli program, HIPPY trains parents from low-income households on how to prepare their children for school, and has been adopted in 23 states.

More recently, I have watched Hillary interact with Prime Minister Netanyahu, and, unlike President Obama, Hillary has a strong working relationship with the prime minister. That relationship has already borne results. To take just a few of the many examples: Hillary worked closely with Prime Minister Netanyahu to negotiate a ceasefire that stopped the barrage of Hamas rockets raining down from Gaza, to preserve Israel’s qualitative military edge through the funding of Iron Dome, and to fight BDS and prevent unilateral Palestinian statehood at the UN.

With regard to Iran, it is important to recognize that, while Hillary did support the Iran deal (wrongly, in my opinion), her position is not the same as that of President Obama. According to recent interviews conducted by the Jerusalem Post with Hillary’s inner circle, she “was uncomfortable with Obama’s approach from the start.” Hillary is an advocate for a muscular foreign policy, and she recognizes that Iran is a profound danger not only to Israel, but also to the United States.  And her support for the Iran deal comes with strict conditions, as she made clear in remarks at the Brookings Institution: that we seriously penalize any Iranian cheating, that we sanction Iran for its terrorist activities, and that we do not hesitate to use military force if Iran ever attempts to acquire a nuclear weapon.

Ultimately, what Israel needs more than anything else is a steady America, which is both respected and engaged around the world, working as Israel’s key ally and advocate. That is what Hillary represents.

Contrast all this with Donald Trump. The differences are stark.

He shows a total lack of education and preparation on foreign policy. He represents an isolationist and unpredictable America — one that cozies up to our enemies, and claims to put “America First.” His embrace of that isolationist slogan, which first came into vogue in the 1930s, appeals to failed ideas of the past. And his unpredictability on Israel — first pledging to be “neutral,” and then flip-flopping — is highly dangerous.

Domestically, Trump has no real record of engagement with the Jewish community — with our concerns, or our values. In fact, with each passing day — with each new video, recording, or tweet — it becomes clearer and clearer that Donald Trump models the worst type of behavior to our children. Trump has proven to lack any sense of morality, both in public and in private. This man does not deserve the support of our community.

When I go to the polls on election day, I will be thinking about Hillary’s intelligence, and decency, and respect for the values that Judaism has taught me to cherish. And I will think about her focus on building a better future for our community, as Mr. Trump campaigns on some imagined better past.

I will also think about my grandson Nachum, and all of our grandchildren, and the kind of society we will leave to them. And I will know that they will be fortunate to grow up in a world where Hillary Clinton is president of the United States.