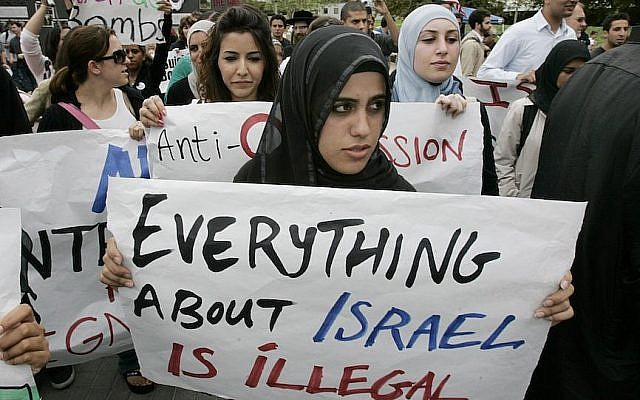 Last week the Spectator carried a disturbing comment on the anti-Semitism furor engulfing the British Labour Party and its leader, Jeremy Corbyn. Alastair Thomas, the twenty-something author, comes to a frightening conclusion: most Labour supporters of his age are indifferent to antisemitism.

Those who try strenuously to separate antisemitism and anti-Zionism include the leaders of the British-Jewish community, who banned Israeli flags from a recent demonstration against antisemitism. According to Thomas, it is a distinction without a difference. Decades of media bias have wrought their distortions: Israel is guilty of all kinds of crimes, his peers believe – and Jews outside Israel are guilty sympathisers.

All this comes from a post-colonial world view that ignores or downplays Arab and Muslim crimes. To give a flagrant example, the Taubira law memorialising slavery (adopted in France in 2001) mentioned the 11 million victims of the transatlantic slave trade, while ignoring the 17 million slaves trafficked by Arabs and Muslims.

How did people get it so wrong?  It is time that some of the misconceptions, that the left especially has been labouring under for decades, were exploded.

Jews are an inauthentic minority: Exaggerated and conspiratorial theories of Jewish power are applied to Israel, the Jew among states,  to constitute what has been termed ‘antisemitic anti-Zionism’. In fact Jews have been a defenceless minority not just in Europe, but in the Muslim world where they were inferior dhimmis. Indigenous Jews were colonised and ultimately victimised by Arab and Muslim racism.  There is a widespread but erroneous perception that Jews and Arabs lived together in peace and harmony before the creation of Israel. Jews themselves are to blame for any antisemitic backlash.

Zionists are white supremacists. Israel is viewed as a settler colonial state, populated by Jews from Europe and America. Yet Jews are native to the Middle East, having been living in Palestine, and the region, at least 1,000 years before the Arab conquest and Islam.   Guilt-ridden because of their own history of colonialism, many westerners view Israel as a white country and the Palestinians are perceived as non-white. But you only have to stroll down an Israeli street to see the preponderance of Jews of colour. Culturally, Israelis are accused of appropriating Arab foods, such as falafel and hummus, although Middle Eastern Jews – now comprising over 50 percent of the Jews of Israel –  have been eating them for centuries, if not millennia.

Israel is a tool of ‘western imperialism. The little Satan gets most of its support from the great Satan, the US. It exploits and oppresses the Palestinians, whose land they have plundered and colonised. This view, of course, inverts the facts: any dispossession and displacement of Palestinians was the consequence of the Arab defeat in the wholly avoidable 1948 war, which Arab states  instigated to snuff out the newborn Jewish state. Crucially, the left prefers to ignore the deliberate plundering and uprooting of close to a million Jewish citizens from the Arab world, who constitute more than half Israel’s Jews today. (The US has only supported Israel since 1967 – before that, Israel was supported by the French and at its birth, by the Soviet Union).

The Palestinians are the underdog: Since the 1967 war,  the conflict between Israel and the Arab states has been decontextualised and reframed as a struggle between the Palestinian David against the Israeli Goliath. The theories of Jean-François Revel, Michel Foucault and Edward Said hover in the background of many a ‘progressive’ Westerner’s’ views of the Middle East. We are at the stage where Palestinians have been so emboldened  by mainstream anti-Zionism in the West that their demand to destroy Israel by enforcing their ‘right of return’ is no longer seen as unreasonable. To support such a Palestinian right is to shill for Arab and Islamist imperialism.

The Palestinians are paying the price of  the Holocaust: widespread is the myth that Palestinians are the innocent  victims  of a calamity inflicted on the Jews of Europe. Yet the 20th century produced a virulent form of genocidal racism, encouraged by the Palestinian Mufti, Haj Amin al-Husseini, against the Jews of the Arab world, as well as in Palestine. The Mufti collaborated with the Nazis and in the event of Nazi victory would have presided over the extermination of the Jews of the Middle East and North Africa. More Jews were driven out by Arab regimes than Palestinian Arabs who fled Israel. Today the torchbearers of Nazi antisemitism are the Islamists and Iran. The Palestinian Authority president, Mahmoud Abbas, has a doctorate in Holocaust denial. It is no accident that the swastika was flown in Gaza during the recent March of Return mass protests.

The spread of falsehoods and propaganda is amplified by social media; liberal opinion is shaped by such ‘impartial’ media as the NY times and the BBC. This is not to say that the left was never anti-Jewish. Indeed the left has an ignoble tradition of antisemitism, often described as the ‘socialism of fools’. If class warfare is the engine of history, Communism has long viewed Jews as capitalists exploiting the workers. In the 1970s, Israel became the main focus for the ‘anti-imperialism of idiots’ when vicious, well- funded and long-running anti-Zionist campaigns were conducted by the Soviet Union.

So deeply embedded is ideological antisemitic anti-Zionism that calls for Corbyn’s left to clean out its stable of antisemites is like asking the Pope to become an atheist. Beyond this, Israel is increasingly illegitimate in the eyes of the youth, the decision-makers of the future. Something needs to be done urgently before we lose them altogether.

Lyn Julius is the author of ‘Uprooted: How 3,000 years of Jewish Civilisation in the Arab world vanished overnight’. Available in paperback and Kindle after 12 April.

About the Author
Lyn Julius is a journalist and co-founder of Harif, an association of Jews from the Middle East and North Africa in the UK. She is the author of 'Uprooted: How 3,000 years of Jewish Civilisation in the Arab world vanished overnight.' (Vallentine Mitchell)
Related Topics
Related Posts
Lyn Julius
Comments