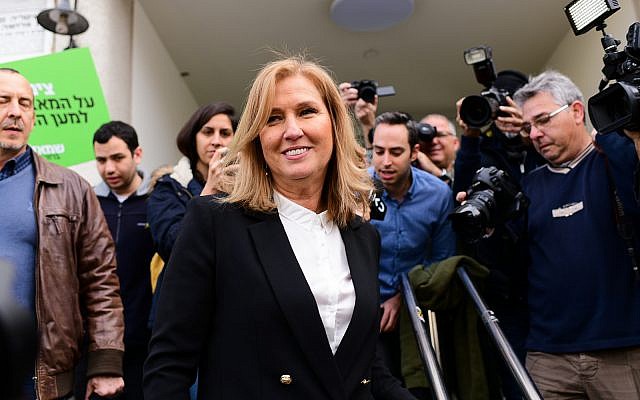 Twenty years ago, I made aliyah, just ten days after the elections for the Fifteenth Knesset. I was a newly-minted Israeli, and there was a whole crop of newly-minted Israeli legislators. Among them was a woman who would break many glass ceilings, Tzipi Livni. And her political career, it appears, ends today.

A lot of people are applauding that, most of them snidely, some of them misogynistically. They snicker as they note that she has held eight different cabinet positions and run with four different parties. After all, in Israeli society, there is nothing worse than being a freier, a sucker, the one left holding the bag. And that’s what has happened to Livni time after time.

Though the Likud’s 2005 Disengagement from Gaza was Ariel Sharon’s brainchild, and his #2, Finance Minister Benjamin Netanyahu, voted for it four separate times, the blame for its missteps is laid at her feet. It was the Bush Administration that wanted Palestinian legislative elections to happen less than six months later, with the participation of Hamas, but sure, that was her fault too. Ehud Olmert’s corruption ended his own premiership, and he handed the party off to Tzipi, his foreign minister (arguably, the last real foreign minister Israel has had). She managed to win more seats than Netanyahu in the subsequent elections, but he had made prior arrangements with the ultra-Orthodox parties to deny her the PM’s seat. Then Shaul Mofaz took her party — all the way from having the most seats in Knesset to the fewest.

She built a new party, coming back to the position in which she’d first distinguished herself, as Minister of Justice. Eventually, she’d join forces with Labor’s Isaac Herzog, ceding him the leadership role in a last-ditch attempt to beat Netanyahu in the last election. Then, in the run-up to this election, Labor’s new leader, Avi Gabbay, unceremoniously dumped her on live television. (I wonder why he doesn’t get criticism for jumping parties…) And now, alone again, naturally, it doesn’t seem like her party can get over the electoral threshold.

That same year that Tzipi first made it into the Knesset, another woman with a famous last name was striking out on her own, as Hillary Rodham Clinton ran for the Senate in New York, winning the retiring Daniel Patrick Moynihan’s seat the next year.

At the same time, another strong woman, Angela Merkel, was assuming control of the Christian Democrats in Germany. She would assume the chancellorship in late 2005. She’s still in that position, but she no longer heads the party and is also at the sunset of her political career.

I think there is something that binds them, beyond gender, hair color and career choice. None of them were supposed to succeed. Livni was the daughter of an Irgun power couple (the first people to marry in the newborn State of Israel!), but that was not exactly the route to power in the State’s early years; Clinton took her promising law career to Arkansas, a seeming dead end; Merkel hailed from East Germany. But throughout their careers, they shared the conviction that democracy, diplomacy and capitalism work, even as Israel, America and Europe seem to be drifting away from that belief. They have earned enemies on the right and the left as they have evolved as politicians. They have absorbed all the slings and arrows of their critics with equanimity. And they have changed their societies forever. I hope that we have not seen the last of them.

In the meantime, let me just say: Thank you, for everything.