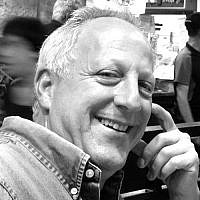 I had a bit of an insight, and I recorded it in three minutes for the family (as we’re of course not holding seder together); thought to share here as well.  Listen in a quiet moment between now and seder night – it’s only three minutes long.  I’m going to give it over at our intimate Seder, with my wife and two of her daughters.  I haven’t seen or heard the idea anywhere else, so I think it’s pretty original, though I won’t be surprised if somebody else has come out with it recently.  Video file is here (a text version below, for those who prefer): 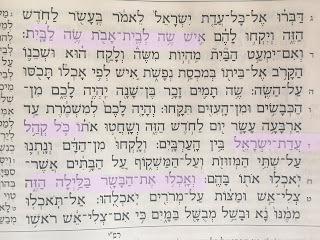 We read in parshat Bo (Shmot/Exodus 12:3 – Heb/Eng here) “Speak to the entire assembly of Israel…they shall take for themselves – each man – a lamb or kid for each father’s house… for the household.” And then in verses 6-7: “…the entire congregation of the assembly of Israel shall slaughter it in the afternoon… take some of the blood and place it on the … doorposts and on the lintel of the houses in which they will it.”

I think it’s fascinating: the Children of Israel – a family/clan/tribe – are carrying out a religious ceremony (sacrifice) and ritual act (marking the doorposts/lintel) as individuals, separately, each in their own home… but very much as part of a greater whole, as a community (“the entire congregation”), as a people/nation now, formed in the Exodus. They did so at the command of God who brought them together, with a shared understanding of their Creator inherited from their forefathers Abraham, Isaac and Jacob, with a shared identity, distinct from other nations including Egypt, and a shared history and destiny. And they did so explicitly to avoid death by a plague – the last of the ten plagues, the killing of the first-born. They did so *separately* – each in his/her own house – but *together* – all at the same time, in the same way, for the same purpose: to save lives and prevent death from reaching them.

Tomorrow night, Jews – the Children/People of Israel – will similarly carry out a religious ceremony and ritual act(s), commanded by the Creator, to commemorate the Exodus, at the Passover Seder – our national liberation festival in a real sense. And we will do so – why is this year different from all other years? – *separately*, in “each father’s/mother’s house” – but *together* in the songs we sing, the foods we eat, the story we tell, at the same time (in each time zone) and in the same way and for the same purpose. That purpose is always the reminder of who we are, where we’ve come from, and what we’re here for; but it’s also the connection created with our people, our nation, our tribe and clan and family. And this year, that shared purpose – separately, together – is to save lives, and avoid death.

May our shared experience, carried out separately, strengthen the ties which bind us even as the distance between us strengthens our communal and individual health and well-being.

Chag Sameach – a Happy and healthy Passover to all.